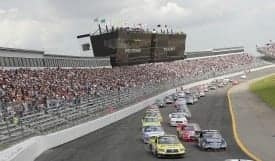 At Martinsville, I thought we would be better than we were. We just tried to work through it it practice, but you don’t get a whole lot of time. When we qualified, we were a little better, but I messed up on the second lap and kinda put us toward the back. And at that place, everyone’s really close on time. You’re back there beating and banging even though you’re not really trying to. I got a lot of front end damage early. Kevin Harvick had such a good truck that he had people a lap down really quick. The crew did a good job to repair a lot of the damage and make sure the truck was still running at the end. We got way better at the end of the race from where we started so that’s always a good thing.

Driver Dakoda Armstrong echoed what everyone else seemed to say about a large, enthusiastic crowd at Rockingham.

Moving on to Rockingham, we had good practices. In fact, in the very last practice we were actually top of the board. We qualified about where I thought we would be–there were some guys that had some good two-run laps. I thought we’d be a little better in race trim, though. It was just a little cloudier on race day than I thought it was going to be. We just started off way too tight. And go figure, we were tight in that longest run at the beginning. We had a few laps and there was a caution before we had a really long green flag run. We came in after that and actually made it a lot better, but by then we were just trying to play catch up. We were doing pretty good there in the middle and towards the end and getting a little better.

Then, with 60 laps to go, the motor got a little hot. We were probably going to get the lucky dog there, but it was starting to blow up and we lost a whole lot of power. The oil temperature got up to about 315 degrees and the water was about 250 degrees, so we lost a little bit of power down the straightaways. But we came in and took all the tape off–I think the last 35 laps or so it didn’t handle well, but it didn’t matter because we were 14th and we had no one to race. There were 13 trucks on the lead lap and everyone behind us was at least two laps down. We were just by ourselves riding the last 30 laps, but it was a good effort getting better by the end of the race. That’s what we’re really trying to do–make sure we get better each time we go out on the track. We’re just looking forward to the next race and we’ll see what happens.

The fans were super excited all weekend at Rockingham. We did a lot of autograph sessions for them all over downtown Rockingham. Every single fan that came by told us ‘we’re so excited NASCAR is back at The Rock.’ I hope it was a good enough show for everyone. It seemed like the stands were pretty full, so it was a good deal for a truck race. I’d say everyone was pretty excited that NASCAR was back.

As far as having fans at the drivers’ meeting, they did a pretty good job of keeping it organized. It didn’t seem like it was too exciting–it was a normal deal where the drivers just let everyone else talk and we don’t really ask any questions. Everyone’s been there so long they know what’s going on. We heard some of the fans thought it was kind of boring, but it was very organized. They stayed out of the way and made it easy to get in. No one got in the way, so it was a good deal and hopefully they had fun watching it.

Looking ahead to Kansas, I think we’re going to have a pretty good piece out there. We had a good run at Kentucky in the last year, and I think this track is pretty similar. So we’re hoping we can get it figured out pretty quickly. I really think we need to go out and have a solid top 10 run, be pretty quick in practice and keep qualifying better like we have been. It’s just important for us to run well and those better finishes will keep coming. We’ll just keep working on our speed and consistency.

There’s not a whole lot going on in the world of NASCAR right now, but one driver that has impressed me this season in the Nationwide Series is Ricky Stenhouse, Jr. I may be a little biased because I know him really well, but as far as him backing up what he did last year, he’s been successful. I figured he’d be good, but he’s already got as many wins as he had all last year and it’s just the start of the season. I know Elliott Sadler got off to a good start too, so it will get interesting between those two when they start reeling each other in. It should be a lot of fun to watch that Nationwide championship battle.

Now for the fun stuff! Looking back at the Easter off weekend, I got to go back home and see all of the family and went to church. All of the kids on my mom’s side of the family were all born around the same time, so we’re all a lot older now. We only have two little ones now that are too young to really do anything. So we had a grown up game of egg hunt. They did a good job of hiding them instead of leaving them out like we do for kids. It was fun to get home and have a good time.

Since I did my last diary, Peyton Manning has landed at Denver, but I’ll still support him. I think it stinks for Indianapolis, but hopefully they’ll be able to rebuild the team and get better. I’m still a Peyton Manning fan, so I don’t want him to go out there and struggle. I’d rather see him go out there and still play well for Denver. I guess I’ll kind of root for Denver even though I’m not a huge fan of their team. I just hope he goes out and does well.

A fun fact that readers might not know about me is that I’ve recently gotten back into iRacing a lot, and I’m a little good at it I guess. But I guess when you’re a professional driver you should be good at racing sims. It’s been a lot of fun and I’ve been doing a lot of other races here and there. It’s cool to go on there and play with people that know me and have a good time. People may not realize just how much fun I have on there.