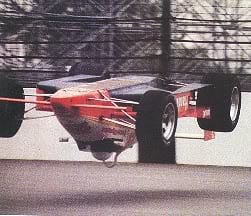 This week, reader Phillip Stigers asks, _“Are there ‘rep firms’ that deal solely in the sales of NASCAR auto sponsorships? Could you name a few of these firms and where they are located? How do they package their product? Can you provide some examples of a ‘typical sponsorship’ – if there is such a thing?”_

Good question, Phillip, and one I can’t completely answer on my own. We all read each other’s stuff here on Frontstretch, and I’m sure one of my colleagues will provide me with some details. However, I’ll tell you what I do know. Just about all of the “big” teams have a Vice President, or whatever they choose to call them, who is in charge of Marketing. It’s the job of this person and/or their department (if they have a staff) to secure sponsorships. I’m sure there are firms which will provide this kind of service for a commission fee. I’ve done the same thing myself, although I’m more familiar with the public relations side of things. There definitely are firms that handle that aspect, one of the most prominent being True Speed Communications. They represent a number of teams.

As for a “typical” sponsorship, I’m not sure such a thing exists in motorsports.

I had considerable experience with helping to draw up sponsorship proposals when I was working at Indianapolis Raceway Park. You have to show that you can provide the exposure that the prospective sponsor needs, and above all to show that you can help them sell their product – whatever it is – and provide a reasonable return on their investment. If they can’t increase sales of their product with the sponsorship, it’s not going to last long. When you read that a team’s sponsor leaves because they’ve, “Decided to go in a different direction,” it simply means that this particular “direction” isn’t producing the desired results.

You start out with your basic proposal and then list the benefits which the sponsorship will provide to the prospective sponsor, as well as those which it will provide your facility or team. Once it’s all on paper, it has to be sold. In my early years at IRP, this was the job of the general manager, the late Bob Daniels, and he was one of the best. He’d take the proposal, have dinner with the proper representative of the prospective sponsor, and usually sell the deal.

I’ll also have to credit him with teaching me how to lay out a sponsorship proposal, and I’ve had to use his lessons many times. You want an example? Well, I wasn’t there when he sold the Busch race deal to Kroger, but that lasted more than 20 years and was the longest running single race sponsorship in NASCAR.

The best example I could give you doesn’t involve NASCAR, but the Thursday Night Thunder ESPN series that became so popular. I was there when that came along in 1988. First, Bob sold NHRA on the fact that it was a good idea, and then told me we needed a sponsor.

We drew up the proposal, and he immediately sold it to Hardee’s. That was one of the best cooperative deals I’ve ever been involved it. Hardee’s put coupons for a $5.00 adult ticket in each takeout bag, and we’d end up getting hundreds of those things at the ticket booths. They brought a mobile sales outlet (food wagon) to each event and parked it in the pit area. Another example of Bob’s salesmanship – we had a contract with Pepsi at the time, and Hardee’s was serving Coca-Cola. Bob sold them on the idea that they could serve Pepsi out of that thing; we had the only Hardee’s in the country serving Pepsi. We also put Hardee’s banners in spots where the cameras would get them, and we came up with a “Hardee’s Deluxe Racing Series” logo that was posted everywhere.

Funny aside to this dissertation…about four weeks into the program, Pancho Carter was up in the tower. Pancho had driven a Hardee’s-sponsored car in the Indianapolis 500, and a couple of years before had flipped one in the second turn on a qualifying day, which resulted in a big picture of Pancho flipping on the front page of The Indianapolis Star sports section. Ted Dudine, who was representing Hardee’s at the time, said, “John, we haven’t had this much media coverage since he (pointing at Pancho) was driving our car.”

I replied, “Yeah, and that time you had to turn the newspaper upside down to read your logo.”

“Poncho, that take was really good, except the car was upside down. Let’s do it again, but be a lamb and try to keep the wheels on the ground this time, ‘mmkay?”

Maybe I haven’t given you a complete answer to your question, Phillip, but I’ve told you what I know about what was a “typical” sponsorship to us at a very successful track. Now I’m involved with a short track in southeastern Kentucky, and sponsorship has many forms in the “whatever it takes” philosophy. Whatever helps your track and cuts down expenses can be valuable.

We have a radio show sponsoring our mini-stock series, and they do a lot of talking about all of your racing. A restaurant cuts down our concession prices by providing the best barbecue in the area. A similar arrangement with a wholesale food outlet has the same effect, while an apparel & graphics outlet provides banners and decals at a discount. All of these are division sponsors. In return, we provide them with all the publicity we can.

On our “official” radio station, WKFC-FM, we get a number of commercials aired each week at no charge, along with a recorded race report each week. We provide them with the publicity and cut their production costs by recording the spots ourselves. I know we’re not talking about the million-dollar deals they have in NASCAR, but sponsorship can take many forms, and it wasn’t that long that many NASCAR tracks were privy to many of the grass roots marketing and sponsorship that we are now.

Like any sponsorship arrangement, it simply has to benefit both parties, and to sell it, you have to show that it will. Then you just have to deliver…