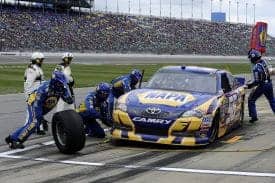 You can’t win ‘em all, but that doesn’t make a tough loss any easier. Martin Truex Jr. dominated yesterday’s race at Kansas Speedway, leading 173 of the 267 laps, only to have a bad set of tires cost him the race. It wasn’t for a lack of effort, however. Truex did everything he could in the closing laps to catch and pass Hamlin, almost wrecking himself in the process. It wasn’t to be, and Truex exited the car exhausted and clearly frustrated while Hamlin headed to Victory Lane.

Martin Truex Jr. was disappointed with second at Kansas but also understands that his team is finally on the verge of realizing its full potential.

While the disappointment was understandable in terms of the domination, the race was more of a win for Truex and team Michael Waltrip Racing than a loss. For Truex alone, it’s an improvement over last year. After eight races in 2011, Truex had only one top 10 and was sitting 19th in points. Now through eight races this season, Truex has 6 top 10s, three of which were top 5s, and the near win at Kansas Speedway put him up to second in points, just 15 markers out of the top spot.

This is no fluke, either, as the performance illustrates a major turnaround for everyone within the organization. Mark Martin continues to run well on a part-time schedule, and the newest driver to the roster Clint Bowyer has had some impressive performances even amidst talk (myself included) that the move from Richard Childress Racing to MWR was a mistake.

I’m not shy to admit that I’ve been one of MWR’s biggest detractors, including this year. Even with evidence of resurgence by the team, I still didn’t buy into it. Heck, “resurgence” isn’t even the correct word. It’s a _breakout_ year for the organization, and one that I didn’t expect to last. However, with Truex’s performance at Kansas I can no longer deny this team is establishing itself as a competitive force in this series. Even with mechanical issues for two of their three cars—both Bowyer and Martin retired early from the race with engine problems—they were still performing well before they had to head to the garage area for the day.

Here’s the thing. This success didn’t happen overnight or over the course of the offseason. The organization has been working to improve on their performance since their establishment in 2007, where they endured a season of fighting to make races and obtain relevancy. Even when David Reutimann won the organization’s first race at rain-shortened Coca-Cola 600 in 2009, nobody considered MWR to be a _legitimate_ threat on a week to week basis and they were the butt of many jokes amongst fans and media.

If there’s one thing about Michael Waltrip, though, it’s that he never gives up. And apparently neither do sponsors. During a Friday press conference to announce the expansion of sponsorship from 5 Hour Energy, general manager Ty Norris explained that the reason for the turnaround was due in part to the sponsor’s dedication through the tough times. Though a few companies have come and gone, Aaron’s and NAPA have been with them since the beginning and have played a role in bringing the organization to where it is today.

Which brings us back to Truex. Truex has been with the company since 2010 after spending his entire career at Dale Earnhardt Inc. and Earnhardt Ganassi Racing. With only one win between 2006 and his move to MWR and having never finished any higher than 11th in points, nobody saw much to believe in with the New Jersey native.

But Waltrip did, and now the No. 56 is the second best team in NASCAR, just 15 points behind Texas race winner Greg Biffle. Again, there aren’t many people more surprised than me and I can no longer hide behind the “every dog has its day” theory. In fact, I was internally eating some crow as I saw Truex dive-bomb into turns 3 and 4 not once but _twice_ in the waning few laps at Kansas Speedway and fall just short of making a pass on Hamlin. Sure he’s had momentary displays of excellence in his career, but nothing that made me a believer that Truex would ever be a true contender in the Sprint Cup Series.

With that said, however, the disappointment on Truex’s face throughout all of the post-race festivities was as plain as day.

Let that sink in for a minute. Truex was _disappointed_ with a second-place finish. Not elated, not optimistic, not thrilled. _Disappointed_.

The thing is, he really shouldn’t be! The loss hurt, yes, and it had to suck to sit there and watch Hamlin doing burnouts on the frontstretch even though Truex had spent more time out front than anyone else. But, for not just an organization, but for a driver who has struggled to remain relevant for most of his career, second place and 173 laps led is a pretty big victory.

Admittedly, it is a testament to any organization when top 5 finishes are disappointing. As evidenced by cold, hard facts and statistics, a performance like this for either of MWR’s driver’s last year would have been nothing short of miraculous. I wouldn’t imagine that if Truex had led 173 laps and finished second in last year’s race at Kansas Speedway that he wouldn’t have been as disappointed as happy to finally be competitive. The fact that they have been performing so well that they feel a win is imminent means that this team has turned a huge corner and will likely be a force to be reckoned with for the next several weeks if not for the rest of the season.

Don’t think for a second that this loss dealt a blow to Truex’s confidence. It was quite the opposite. One of the first things out of Truex’s mouth after he got out of his car was “I know the win will come.” He spoke of how the team as a whole felt like they were getting closer and closer to that victory, and — you know what, let me just have him tell you himself:

“We’re not just a flash in the pan. We’ve been solid each week, and I know our wins will come …”

“ … We just need to keep running like we are. It’s been a long time since I’ve won, and I know I’m capable of it, and that’s the most disappointing thing is letting one slip away.”

Don’t get me wrong. I don’t want to give the impression that Truex himself didn’t admit that disappointment in a second-place finish was a huge turnaround from last year. He knows it is, and small victories for a race team eventually lead to big ones. So in no means was Kansas Speedway a loss in the sense that they lost ground on the competition. They may not have been sitting in Victory lane, but they got their point across to their fellow drivers that they aren’t—as Truex put it—a “flash in the pan.” That’s something that, if they’re being honest, this organization has never been able to do, but are finally becoming a week in and week out threat that their competition can no longer ignore.

Sunday may haunt Truex for about a week’s time, but make no mistake: This team _will_ win at least one race this season and it would be no surprise to me and any others if they were able to grab a Chase spot. Don’t count Bowyer out, either, as he has had some strong races thus far too.

Gosh, I can’t believe I just wrote all those positive things about MWR. I need to go check my temperature or something! Is this for real?!

Ok, so they probably aren’t going to have a huge say in the championship this year, but the fact that they are having a say at all in these races is enough to make everyone pay attention. That’s a hard place to reach in this sport, but once you do, there is no turning back. Keep an eye on this team in the next few weeks. They may surprise you just as much as they have surprised me.