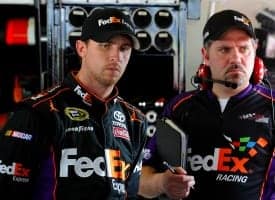 *NASCAR Sprint Cup Series: Is Something Amiss at Joe Gibbs Racing?* With his second win in eight races so far in 2012, Denny Hamlin and his No. 11 Joe Gibbs Racing team are staking a claim as an early title favorite and, perhaps more importantly, erasing a forgettable 2011 season in which Hamlin struggled to a ninth-place points finish after leading the points going into the final race and finishing a close second in 2010. Now, paired with reigning champion crew chief Darian Grubb, Hamlin seems to have put 2011 firmly in the rearview mirror as they sit a comfortable fifth place in the standings.

Denny Hamlin and Darian Grubb are on a roll, but the rest of Joe Gibbs Racing is off to a slow start.

But things don’t look quite as rosy for JGR as a whole. Hamlin is the only JGR driver in the top ten in Sprint Cup points. Joey Logano, who got off to a quick start, has slipped to twelfth–one spot ahead of Kyle Busch, who has struggled with just one top-5 finish this year. Fellow Toyota team Michael Waltrip Racing has a slight edge over the JGR crew in driver points with Martin Truex, Jr. second and Clint Bower currently 11th.

On the Nationwide side of the garage, JGR does have the No. 18 in sixth in car owner points, but the Nos. 20 and 11 are currently 20th and 30th, respectively; this leaves Brian Scott, who is currently 18th in driver points, in jeopardy of having to qualify on speed should he slip at Richmond. All of this leads to two questions that fans should be asking: first, did JGR make the wrong move in merging its in-house engine program with Toyota Racing Development’s engine shop? And second, is the organization spread too thin with six cars in two series? No other Cup organization has this many since Roush Fenway scaled back to three Cup and one full time NNS team this year. The team is still in position to turn things around, but if they don’t, it may be time to reevaluate. _–Amy Henderson_

*IZOD IndyCar Series:* So what does it take for the IndyCar series to race in Brazil? Teams and drivers will be heading to Sao Paolo, Brazil, for next weekend’s Itaipava Sao Paolo Indy 300. But what about the cars and equipment? The regular race tires, fuel, and Dallara’s chassis parts inventory left last month on a cargo vessel. The off week was spent preparing cars for 26 entries, one Holmatro Safety Team truck, equipment to rig two more safety trucks, pit and scoring equipment, and rain tires to be packed onto two cargo planes that left Sunday for Brazil. The cars travel in individual racks and the racks were modified slightly to accommodate the new cars this year.

Most teams packed only one car, with no room for a backup, so look for teams to be extra-careful in practice. The grand total net weight for the items being shipped by plane was more than 400,000 pounds. Once in Brazil, everything will be transferred to trucks for the rest of the journey to the race venue. At the track it will be inventoried, inspected by customs, and turned over to the teams to unpack for the race weekend. It’s a lot of trouble to travel 5,000 miles to a different continent for one race weekend, which leads to the natural question of whether or not international races are cost-effective for IndyCar. But support for the event in Brazil is strong. There are a lot of IndyCar fans in Brazil and a number of drivers in the series look forward to it as their home race. So don’t expect it to disappear soon; but do keep one eye on the economy. _–Toni Montgomery_

*NASCAR Camping World Truck Series: Can Peters Keep Momentum Up?* Timothy Peters left Kansas Speedway on Sunday with his fourth consecutive top-5 finish this season. As the only driver to score a fifth-place or better in all four races this season, Peters holds a slim four-point advantage over Saturday’s race winner, James Buescher. It’s certainly a strong start for Peters–whose Red Horse Racing teammate John King visited victory lane at Daytona earlier this season–and certainly leaves him optimistic for what the next 18 races hold for his No. 17 team. However, the big question that remains is whether he can keep up his forward momentum. Two years ago, the driver of the No. 17 Toyota started off the year with four consecutive top-10 finishes and held the points lead. But once the series hit that fifth race, Peters followed up with two back-to-back results outside the top 20. He never sniffed the lead again in 2010 and ended up fifth in points when the checkered flag flew over Homestead-Miami Speedway.

It remains to be seen whether Peters can continue his strong start and turn it into a competitive run at the championship. The next few races could be telling and, if Peters strings together a few more top 5s, he’ll put himself firmly out front in the standings and emerge as a strong championship contender. _–Beth Lunkenheimer_

*Short Tracks: Carolina Crown Winner Official After Tire Debacle* The Carolina Crown was run to completion three weeks ago. But the winner wasn’t officially crowned until this week–and it wasn’t without even more anxiety than there was on race night. After the completion of the race at Lancaster Speedway, the tires of the top three finishers were sent off to an independent lab to be analyzed. After the process was completed, the tires of race winner Scott Autry did not match the benchmark sample that was provided by American Tire. After the failure came to light, the tires were tested with a more thorough process two more times and still came up as different from the benchmark.

Race promoter Cody Sommer notified the team that their improbable victory was going to be thrown out thanks to illegal tires. Autry denied the allegations, noting, “I’ve been thrown out for fighting but I’ve never been thrown out for cheating. It’s not about the money, it’s about reputation.”

After conversations between Sommer, Autry, the lab and American Racer (the company who manufactures the tires of the race winner) it was determined that the benchmark tire that was provided to the lab was from their 2011 tire instead of their 2012 tire.

Once the proper benchmark tire was provided to the lab, the tests confirmed that the tires were, in fact, legal, and Autry’s remarkable win was upheld. It is a shame an error by a tire company caused so much consternation between the promoter and the race winner but, in the end, putting on a clean show was what it was all about and the process assured that happened. _-Mike Neff_