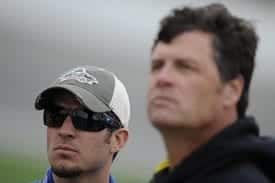 Michael Waltrip Racing began in 2007 with the coming of Toyota to NASCAR, and until now, it’s not had more than drips and drops of success in the ocean that is the NASCAR Sprint Cup Series.

Now, with driver Martin Truex Jr. turning out to be the Beast from the East this year, much as he was before he left Earnhardt Ganassi Racing to go to Waltrip’s Toyota team, the drips and drops are turning into torrents.

Truex Jr. finds himself second in series points to Greg Biffle after his second-place finish Sunday at Kansas Speedway, and he’s been in the hunt for victory in the last two events.

Team owner Michael Waltrip and lead driver Martin Truex have perservered through the growing pains of a new organization and finally seem to have the team the envisioned in 2007.

As the lead driver for the organization, Truex Jr. has been under a lot of pressure—both from within his helmet and from the team–to produce these kinds of results on a consistent basis. This year, it’s happening, and while there is some frustration, there’s also hope. It’s coming none too soon for the Clam Professor’s son.

“I think that plays a big part in it,” he said after the STP 400. “I felt like today was kind of a day where I thought I was back and felt really strong that we’d have a car that could contend for the win going into the race and then to be able to do that all day long, it was a good feeling.”

It must have been, as Truex Jr. led 173 of the 267 laps. But when the sun broke through the clouds with about 30 laps remaining, it changed the handling of the NAPA Toyota from pretty good to “wrecking loose.”

That allowed Denny Hamlin to pass for the lead with 31 to go, and it was a chase from behind the rest of the way. When the clouds reappeared with 10 laps remaining, it woke the NAPA Toyota up, and Truex Jr. had two shots at the victory in the final three laps.

“You know, as disappointed as I am with this second place, this is a big day for us as a team,” Truex Jr. said. “It’s kind of a statement for us that we’re here for the long haul, we’re here for the rest of the season. We’re not just a flash in the pan. We’ve been solid each week, and I know our wins are going to come, we just need to keep running like we are.”

In fact, Truex Jr.’s last victory was also his first. It came at Dover in 2007, not far from where his father runs his clam-fishing empire.

“It’s been a long time since I’ve won, and I know I’m capable of it, and that’s the most disappointing thing is letting one slip away today. If I had made a mistake or we’d made a bad adjustment or something, it would probably be a little bit easier to swallow to be honest.

“But to put tires on and touch the car and all of a sudden the car drives worse than it has all day, it is pretty frustrating when you haven’t won in a while. But again, I’ve got a lot of confidence in this team right now.”

The confidence is flowing nice and steady in the MWR shops off Exit 28 in Cornelius, N.C. As well as Truex Jr. is running, the team car of Clint Bowyer is just as competitive, and the ageless Mark Martin is doing what he always does: getting as much out of a car as there is and making sure it finishes there.

Waltrip, who endured tremendous struggles in 2007 getting the Toyota program off the ground and working through penalties that threatened the program’s advancement at Daytona that year, has stuck with it and forged, in five years, the team that he envisioned back then.

The addition of Scott Miller from the Richard Childress organization has paid dividends, and Truex Jr.’s crew chief, Chad Johnston, is making headway in getting the team to the top of the leader board.

Miller has made a difference from the technical side, and Truex Jr. credits him for smoothing out the processes that were already under way at MWR.

“He came on at a time when we were changing the way we build our cars and did our program,” Truex Jr. said. “That was a really good thing for us. He came in and streamlined the process, made sure it was consistent, made sure we were getting everything out of the people on the floor building the race cars and things. Scott has been a lot of fun to work with. He was my crew chief when Chad was suspended for a few races last year and really got to know him well.

“He got a really, really good inside look at our cars and what we were battling with and what we needed to do better with, and as bad as it was to have Chad get suspended and all that stuff, it was a really good opportunity for Scott to really take a good look at the whole program and be a part of the program and say, okay, these are the things that I need to do this winter.“

Miller has also been sort of the glue that all three teams needed, sharing setups and making the three teams work as one big unit, Truex Jr. said.

There is talk, some of it coming from MWR itself, that with the way the MWR teams are performing, that there’s now a race for top Toyota team in NASCAR’s top division with Joe Gibbs Racing.

Truex Jr. looked that one over before responding to the question asked after the race on Sunday.

In the meantime, the NAPA Toyota is at or near the front nearly every week, and while that is heady stuff, it is also telling that Truex Jr. has his eyes firmly on the prize. “Good things are in the future for us, and I’ve just got to keep looking at that direction,” he said.

And he’ll get that victory sooner rather than later, in all probability.