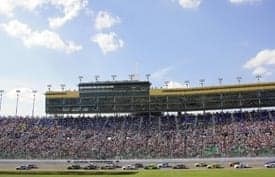 *ONE: Kansas a Shining Example of Gear Rule Gone Bad*

Sunday’s Cup race at Kansas was one of, if not the, most taxing 400-mile race on engines I can remember watching. Michael Waltrip Racing Toyotas, Hendrick Motorsports Chevrolets, a Penske Racing Dodge, valve trains and other components were failing almost at will even on a cooler afternoon. The broadcast booth seemed to conclude this was the product of a new, higher gear ratio used at the Kansas Speedway, and there didn’t seem to be any disputing the accuracy of that statement.

Kansas produced a pile of engine failures on Sunday–was the restrictive gear rule to blame?

Mechanical failure is part of the sport. Always has been, always will be. And one of the risks of running a higher gear and the RPMs that come with that decision is a greater chance that an engine’s going to go sour. Problem is, thanks to a restrictive rule package, that wasn’t a risk that anyone took this weekend, it was a mandate.

Fortunately, at least based on the results sheet, there were no teams out there that suffered an engine failure that were in a situation that would have called for running a less aggressive package (Dave Blaney was listed as having retired for a vibration, coincidentally in his first unsponsored race of the season, the rest of the early retirees have already start-and-parked at least once this season). But this weekend was still a glaring reminder of just how restrictive having a gear rule defined to the Nth degree by the sanctioning body really is.

The dozens of engine builders out there don’t build spec products. The dozens of teams on the track have different agendas, be it to survive and stay in the top 35 or battle tooth and nail for the win as Denny Hamlin and Martin Truex Jr. did Sunday. Giving teams a limited menu of gear options and expecting all 43 cars to somehow homogenize their goals and needs to those options leads to, well, what was seen Sunday. Every type and team of car imaginable found some kind of trouble over 267 laps, and all of that for playing by an ever-narrowing set of rules.

Mechanical failure is part of the game. But having something unfortunate befall a race team should be because of their own choices, not a limited slate of options handed down by the powers that be.

Even though his hometown race came to a woefully early close courtesy of the previously mentioned engine problem, Clint Bowyer’s No. 15 car was in the news earlier in the week for sponsorship reasons; partial-backer 5 Hour Energy has expanded their schedule on the car to nearly a full schedule in 2012, a considerable increase for a sponsorship arrangement that just a year ago was sponsoring an independent Nationwide Series car and rumored not to be worth enough to keep Clint Bowyer in a car at Richard Childress Racing.

Sounds great on paper. But besides being an absolutely enormous financial commitment, this is a story that’s been told before at Michael Waltrip Racing. Back in 2009 long-time backer Aaron’s was going to cover the bill for David Reutimann 18 times…then suddenly, they were announced as the full season sponsor.

Now sure, maybe 5 Hour’s new deal is just working out that well. But that doesn’t explain why a company like Aaron’s that knows full well what its advertising dollars translate into (seeing as how they’ve been backing MWR since the days of the Mayans) would suddenly jump into a 50% increase in races.

What’s happening? It’s simple. Finding those dollars is hard, even for a team whose owner and brother make damn sure their cars are plastered all over FOX any given Sunday. So how does one get around that fact and make everything seem OK? Cut a deal to an existing sponsor, and then put out a press release about expansion. The other sponsor gets a price cut, and the team gets to sell the notion that things aren’t so bad in NASCARland. What’s more, the team doesn’t have to offer reduced rates to another backer should they come on board…after all, the discount was a special deal for a repeat customer.

Speculation? Sure it is. But come on…anyone really think Michael Waltrip and friends are that good at selling?

The biggest bright spot for MWR though came in the form of Martin Truex Jr., who came agonizingly close to scoring a long overdue second Cup win. Truex was visibly driving the wheels off his No. 56 in the closing laps, making not one but two dive-bomb moves a la Carl Edwards on Jimmie Johnson in 2008 to try and steal the trophy from Denny Hamlin.

That Truex made the big move two laps from the finish instead of the final one was a brilliant ploy, both psychologically and practically. Hamlin handled the situation masterfully, but there’s no way any driver would not have been at least somewhat concerned to see such a desperate and risky move made even before the white flag flew. Truex knew full well how that scenario played out for Carl Edwards when he tried it at Kansas, threw the script out the window, and made the move his own.

Further, Truex gave himself a chance to recover by making the dive a lap early. Sure, anyone that’s watched races at Kansas knows full well the chances of pulling the dive through turn 3 at full speed off are a snowball’s in hell. But there’s always the chance that trying that will be enough to disorient one’s opponent and force a mistake. By making the charge with time to spare, Truex could have pounced on a mistake by Hamlin even after losing so much momentum in turn 4.

It was the right move and one worth watching. Hamlin deserves credit for holding it off.

*FOUR:* Drive for Diversity Lawsuit In a Word: Asinine

Michael Rodriguez is suing NASCAR for unspecified damages after he was refused entrance into the Drive for Diversity program, citing that his complexion made him look “too Caucasian” according to a Sporting News report.

Let’s get one thing straight here. This is the biggest load of horsecrap I’ve heard in a lawsuit in some time. For one, Aric Almirola doesn’t have a complexion that screams minority, and yet here he is, a Drive for Diversity graduate and a full-time Cup Series driver of the famous No. 43 car. I’d be more inclined to believe that NASCAR would be stupid enough to deny someone for having too dark a complexion than I would what Rodriguez is selling.

The larger issue though is one that should go without saying…the second one brings race, ethnicity and gender into things, this is inevitably going to be a byproduct. NASCAR’s Drive for Diversity program inherently opened the door to this joke of a lawsuit, because it has once and for all said “We are NASCAR, and are going to hold spots open for people because they look different, or come from somewhere different.”

This is not the NFL, the NBA, or any other professional league…because there are no franchises here. If a team doesn’t want to play with a driver, nothing is stopping that driver, owner, crew member, whatever, from putting their own team together and showing up on race day. The fact that this door is open and always has been (NASCAR has had minority and woman drivers since that first season in 1949) shows once and for all that this program needs to be axed.

And as for Michael Rodriguez, take back the down payment you gave your lawyer, buy a set of sticker tires and line up a Nationwide ride for a weekend if you want to be a NASCAR racer so bad.

*FIVE:* We’ve Heard This One Before

Kudos to the Topeka Capital Journal for a solid piece of reporting on the latest start-and-park to join the Cup ranks, the No. 19 team of Tri-Star Motorsports (err, Humphrey Smith Racing, it’s so hard not to confuse the two, seeing as how the Nationwide and Cup No. 19 cars have the same number, paint scheme and driver). Longtime owner partner Randy Humphrey, who for the last few seasons has fielded the full-time start-and-park Nos. 90 and 91 in the Nationwide Series before graduating to the Cup Series with Phil Parsons, is at it again, this time partnered with longtime owner and engine builder Mike Smith.

Humphrey said all the right things. We’re building for the future, we’re start-and-parking now to get our name out there and to grow, etc., etc. And should that in fact be the goal of the team, more power to them. I sure hope Mark Smith can make it work…that man deserves a real tip of the cap for fielding an unsponsored Nationwide car full-time and for being as willing as he has been to jump full-bore into NNS ownership.

Problem with this deal…I don’t believe a word out of Randy Humphrey’s mouth besides the fact that they’re start-and-parking. This is the man whose involvement in the Nationwide Series for years, and whose involvement in the Cup Series with Phil Parsons for years barely produced enough full-time race performances to fill the digits on my hands. This is the man whose teams have made start-and-park not a means of survival, but a reason to exist. One other point worth making…how many of those efforts that Humphrey has been a part of actually led to a sustainable race team?

The Nationwide operation is dead. And Phil Parsons’ team is start-and-parking, even after putting out a press release toting their new efforts to race in 2012 and Michael McDowell’s K-Love endorsement.

I hope I’m wrong. Hell, I hope this operation is simply being used as a means to funnel money into the Tri-Star Nationwide program, just as Joe Nemechek’s Cup team has been doing for years. That’d be a higher purpose that anything else Randy Humphrey has fielded in recent memory.