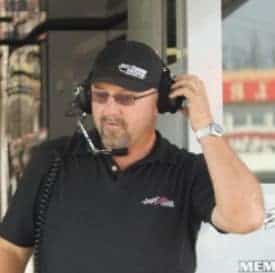 _This week’s edition of Tech Talk once again features Bryant Frazier, the 2011 K&N East Series champion crew chief for the No. 18 Joe Gibbs Racing Toyota. Frazier has started off the season in strong style. After an average showing at Bristol, Frazier’s driver Darrell Wallace Jr. went to Victory Lane at Greenville-Pickens Speedway in the second race of the season. The series now heads to Richmond International Raceway where Wallace took the win last year in the inaugural event at the track for the K&N East Series. Frazier discusses what they change, what stays the same, and what you have to think about at the fast 3/4 mile track at Richmond._

Bryant Frazier will bring his No. 18 to Richmond this week in the K&N East Series.

Mike Neff: *You’re coming off of a win at Greenville-Pickens, which is a half mile, virtually flat track and headed to Richmond, which is a 3/4 mile, banked, fast track with a lot of grip. What all do you have to change on your car? Is it pretty much everything or is there some things that can be used at both tracks?*

*Bryant Frazier:* There isn’t a whole lot that carries over. We still run a few things that are close. Richmond, like you mentioned, we have to work on keeping our momentum up. It is a lot faster track with the banking and there is a lot more grip there than at Greenville. We definitely have to work on keeping the car freed up and keeping the momentum in the car. Not a whole lot stays the same.

Mike Neff: *Do you use the same car for both races or do you use a different car because Richmond is so much faster and higher banked?*

*Bryant Frazier:* We are running the same car. We kind of have a car–we have a couple cars here that we run–but we have a car that we like and Darrell seems to like it. It ran well at Greenville. We’re just going to clean it up, change some suspension pieces on it, and are taking it back to see if it will run well at Richmond. It is the same car we ran at Richmond last year, also.

Mike Neff:*Speaking of last year, your team sat on the pole with Max Gresham at this race last year and obviously had some speed there. However, Darrell ended up winning the race with another team. Are you going to use Max’s setup from last year, are you trying to use Darrell’s from last year or are you doing a combination of the two?*

*Bryant Frazier:* We’re doing a bit of a combination. Probably more our setup but then tightening things up with some of Darrell’s stuff. Y’know Darrell, with the team he was with last year, he knew some of the stuff he was running, I’m not going to say he knew all of it. We’re going to try and make ours better. He knew what our car was like because he ran behind us there for a while. He knew we were loose and so after he passed us and went on, we know we need to tighten our car up a little bit.

Mike Neff: *You’ve had about a month off since Greenville, what have you been doing?*

*Bryant Frazier:* WOW!! We’ve been getting our cars ready. Kind of have our Iowa car ready to go. Getting some other stuff put together here for Bowman-Gray. We ran Dylan Kwasniewski there at Greenville also, so we’re trying to get the car he ran put back together so that we can run him again at Gresham Motorsports Park. So we’re trying to get all of that stuff put together to get ready because, once we hit May, we get pretty busy through our testing and going into June and running three races. So we’re basically just trying to get ourselves ramped up for the Summer.

Mike Neff: *With all of that did you get any testing in this month?*

*Bryant Frazier:* We did not test this month. We’ve got a test at Bowman-Gray. There’s an open test so we’re all going to be up at Bowman-Gray for that test. Maybe do some other testing here at the end of the month at Gresham since Dylan is going to run there. Get him there and get him some laps in. Then may try and go to the new track, Raceway Park, that we’re running later in July.

Mike Neff: *Like you said, June and July are really busy for you guys. Do you need to make sure you have all of your “I”s dotted and your “T”s crossed as you get ready to head into May knowing how busy the next couple of months will be?*

*Bryant Frazier:* Definitely, I think that was a big advantage for us last year, being prepared for that month of June with us racing three times close together and all being short track races. As you say, trying to have those “T”s crossed and those “I”s dotted so that when you do get to that month you don’t get caught off guard. We’ve definitely been working hard trying to get prepared for the Summer months.

Mike Neff: *Back on Richmond, it is a high speed race track. Do you have to worry much about engine cooling there or does the speed of the cars pretty much take care of keeping the engines cool?*

*Bryant Frazier:* No, we definitely have to cool them. We have to get enough air into them. You have to achieve that fine balance. You want to run the least amount of opening as possible to keep your downforce up so that you can make the car turn with the aero part of it, but you definitely have to keep the engine cool. These engines are very durable and they are very good engines but they still can’t be run too hot or you’d have to rebuild them every week. We don’t want to get them too hot to where you’d burn them down so it is definitely a balance there.

Mike Neff:*While we’re on the cooling side of things, how about with the brakes? I know at Greenville you are on a flat track with long straights and tight corners. Richmond is higher speed but do both of them require a pretty aggressive brake cooling package?*

*Bryant Frazier:* Richmond isn’t a terrible brake package for the K&N series cars. It is skewed a little bit toward the speed. Our tire doesn’t quite put the load and force in through the brakes that the radial does. The radial puts so much load through the tire. It has a lot more straight line and a lot more braking force put into the chassis. So we don’t have a terrible amount of cooling problems, not like the Cup and Nationwide. I know it is a really demanding track on those two series. For us, we do have cooling issues, we have to run some air to them but it is not as demanding as say Greenville or some of the other tracks we run.

Mike Neff: *Thursday night, while you’re running the K&N cars they’re also running the Denny Hamlin Short Track Showdown. Are you guys doing a car for that race as well?*

*Bryant Frazier:* We’re not. Darrell is running his personal car. I think he went to the test and was really pleased with his car for that race. We’re not, per se; the K&N team doesn’t have any involvement with it. Other than we may go and help Darrell during the break or something, or hang out with him a little bit. I’m not sure but I think all three of our Cup teams are going. I know for sure Denny is running.

Mike Neff: *You said the next track you’re going to is Iowa. You said you’re getting a different car ready for that. Is it because it is a higher banked track than Richmond is? I know that they’re both 3/4 mile tracks. Is there that much difference between the two?*

*Bryant Frazier:* Well, yeah, it isn’t a lot different. There’s probably a little more speed. It is a car that has been really successful here in the Joe Gibbs stable throughout its history. I’ve never raced it before. I’ve been kind of holding onto it a little bit. We’ve always run one other kind of car at those tracks. This year we’re going to venture out a little bit different and run this car here and see what we’ve got with it.

Mike Neff: *Final question, how many K&N cars do you have for Darrell?*

_As the K&N East Series heads into Richmond, Frazier and his No. 18 team looks to continue their march to a second consecutive championship, with a different driver. Darrell Wallace Jr. leads the points standings by one over Ben Kennedy and Chase Elliott. This coming weekend finds Wallace at the track where he won the K&N race last season and nearly took the win in the Short Track Showdown, if not for a late race restart accident. Both races will be shown on SPEED Thursday night._