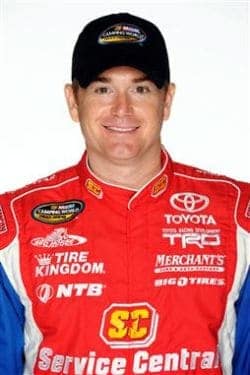 _The Camping World Truck Series is one known for its hard racing and great finishes. Series regular Timothy Peters is right at home in a CWTS racetruck, and this year, Peters and his Red Horse Racing team are off to a hot start. Peters took over the point lead after Rockingham and now leads James Buescher by four points, establishing himself as a title threat early. Peters sat down with Summer Dreyer at Kansas to talk about his stellar start to 2012, his thoughts on the CWTS schedule, his culinary weakness, and more._

Timothy Peters: I just think it’s a testament to the company. Butch Hylton and I and everybody at Red Horse Racing, we got on a roll towards the end of 2011. Before you go into an offseason, the way you finish Homestead and how you finish the points, in my opinion, sets the tone through the holidays gearing up to go back to Daytona. We were able to finish in the top 10 in Homestead, get on stage for the banquet for my very first time. What we learned going into that, they just implemented everything and created an assembly line. Hard work and dedication really has paid off for our success and luck is going our way right now.

Dreyer: *Even with your recent success, you still fly under the radar quite a bit. What do you think it will take to be up there with the likes of Ron Hornaday and Todd Bodine where you are considered a threat to win every week?*

Peters: We’re still building our notebook. In some sense, I kind of want to be the type that people don’t talk about and kind of be the sleeper. You want to get to the point to when you come in the gate and when the garage opens, you feel like you’re the team to beat. Not being cocky, just being confident that we feel like we can get to that status. We keep getting to the racetrack, building our notebook, the communication. I’ve been around to these tracks enough to where I feel like I’m very comfortable right off the trailer and I can get the information that Butch needs very quickly to make us go faster.

Timothy Peters says that the key to his team’s success is simple-good communication.

Dreyer: *Has your performance helped your search for sponsors, and does it give you a sense of pride around the garage area?*

Peters: Yes, we’re very proud of what we have accomplished this year as a company. I’m very proud of what we’ve accomplished on the 17 team. With that said, we’re still looking for partners. With the way the economy is, obviously racing has taken a big hit. At the same time, we have proven as an organization that the three teams that we do have that we are very capable and willing to represent a great corporation. It also plays a factor of how we run. If we ran bad the first three races, I probably wouldn’t be sitting here talking to you. But to show everyone how we’ve ran the first three races and how we continue to run and how we feel like we’re a threat for this championship, hopefully we have done our job to attract these sponsors.

Dreyer: *Does it make it any more difficult to compete against Cup affiliated teams and drivers?*

Peters: I feel like we’re equal regardless. We get our engines from Joe Gibbs. There’s a little bit of technical support there, but I’m very proud of what Tom DeLoach and the resources he has given us not only through his side but from Toyota. Without the manufacturer support, Toyota has a big building facility that all the Truck teams, or Cup or Nationwide teams, come to and take advantage of our different tuning tools. They play a big role in our success. Obviously the RCR bunch speaks for itself but week in and week out since Daytona there hasn’t been a race we haven’t been a threat.

Peters: [I’m] Really happy for Andy Hillenburg as far as the crowd that he had in attendance. The racing was just awesome. Obviously I’d have liked for a regular to have won but I guess it’s ok that Kasey came in there and won. We were able to do the tire test and I just think that helped me out leaps and bounds to come back for the race to run as well as we did. We kind of went in there with a game plan of that it was going to go green for a long time. Obviously that wasn’t the case, so we missed it a little bit but we’ve got a great notebook for when we go back.

Dreyer: *Does it bother you when the Cup Series drivers come in and dominate?*

Peters: Not really. You just want to beat them. From my point of view, I don’t care nothing about it. I want them to come and race for my selfish reasons I just want to whoop ‘em every week.

Dreyer: *Speaking of the Cup Series, the schedule is several races in while you guys have only run a few. Do you think the Truck Series needs to revisit its schedule or do you like it the way it is?*

Peters: I want races every weekend. I think when the Cup and the Nationwide guys come down and run the Trucks, I’m not going to say it’s easier for them but they’re more comfortable because they’re used to their Cup cars sliding around and they’re in something week in and week out. Me, I want something every weekend, but we also understand the Truck Series is the entry level of the three major series and they look at it from affordability.

Dreyer: *On a more fun side, many of our readers would consider NASCAR to be must see television. Are there any television shows you follow that are “must-see”?*

Peters: I’d have to say, I’m pretty much an Ax Men and Swamp People regular. I’ve been watching those since the season premiere.

Dreyer: *I don’t understand the hype with those shows, but to each their own!*

Peters: Does watching the 2-hour documentary on Titanic help my case any?

Dreyer: *Yes, but only because I watched it too!*

Dreyer: *What about workouts and eating healthy? Is there a certain type of food that you can’t walk by without giving in?*

Peters: I have to say Cookout, back in North Carolina. It’s a pretty popular chain and it reminds you of your momma’s hamburger that she cooks on the grill. When I see it, I have to have it. I do have a workout regimen that I’ve tried to do. I at least try to work out one day a week. Normally I do it two days a week and run, but the way the schedule is and being back at the shop … I try to stay healthy on that part of it.

Dreyer: *But not when it comes to Cookout?*

Peters: Nope! We went to Rockingham on Thursday last week and we stayed right by a Cookout. I told my wife we may have to have that for dinner one night and we did!

Dreyer: *In closing, obviously your goals for the year are to win races and ultimately the championship. You’re on the right track, so what do you guys need to do maintain this level?*

Peters: Obviously we want to keep winning races, but if we can keep top 5’ing them to death our wins will come. Austin Dillon won the championship last year with a 9.4 average finish in 25 races. With 22 races on the schedule, with the points the way they are, with the winner and the bonus points, getting 42 points and then minus 1 points all the way down to 36, I think your window of mulligans is shut. I have to know who to race, when to race, I have to know how to race the guys on the racetrack and as long as we complete 100 percent of the laps I think we’ll be in good striking distance for a top 5 finish and maybe even that win.