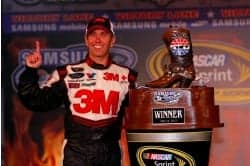 What do Jeff Gordon, Kyle Busch, Tony Stewart, Kevin Harvick and Carl Edwards all have in common? From 2007-2011 they were the dominant drivers in the first 26 races of their respective seasons, establishing themselves as the guys to beat going into the Chase, only to come up short. While we are just eight races into the 2012 campaign, Greg Biffle already appears to be making the strongest case to be this year’s champion. However, he’ll first have to buck a trend that has plagued the other regular season contenders for the past five years as he tries to become the first man ever to secure a championship in all three of NASCAR’s national touring divisions.

Regardless of how the rest of his season turns out, it has already been a turnaround year for Biffle. It took him just three races to match his total of top-5’s from last year and his win at Texas Motor Speedway last week broke a victory drought that went back to the 2010 season. His consistency so far has been amazing, with a 5.9 average finish in the first eight races and no finish lower than 13th. It is very reminiscent of Carl Edwards’ run last year, when he didn’t always have the fastest car but managed to finish near the front every week.

Greg Biffle’s Texas win and fast start cement his position as an early title favorite but can he buck a trend to win it all?

Of course, we all know how the year ended for Edwards, and it’s just another example of how it doesn’t really matter how strong you are in the first 26 races, as long as you find a way to get it done in the Chase. With the exception of Kyle Busch in 2008 and probably even Stewart in 2009, the regular season “champs,” (that is, the drivers who scored the most points) not necessarily the number one seed in the Chase, continued to be strong in the final ten races. The problem was that Jimmie Johnson, and Tony Stewart last year, stepped up their game in the final three months to sneak away with the title. History has shown that the elite drivers win the Chase, not the merely good ones. Sure, Johnson and Stewart had some luck go their way, but when it came down to those final ten races, they were able to get the job done. Is that to say Biffle won’t win this year’s championship because he isn’t considered to be “elite”? No, of course not, but it does not bode well for him according to the history of the Chase, where better racers have failed.

Let’s not get to far ahead of ourselves just yet, though. We are approaching the summer months and will head to some tracks Biffle has historically struggled at, starting with Richmond this week, followed by Talladega, both tracks where he has combined for just three top 5’s in 37 starts. There will also be Charlotte, Pocono, and the two road courses that will present a challenge for the 2002 Nationwide champ. At this point, he is already virtually a lock to make the Chase with his win at Texas and high points position, but some of these upcoming tracks should give us a much better gauge on how seriously we must take Biffle for the rest of the year. If he does continue his hot streak into the summer months, then we must really start to think of him as a legit threat for the Chase.

They say in order to win a championship, you must lose one first. We heard it quite often last year when Edwards was trying to clinch his first Cup title after losing it to Jimmie Johnson in 2008. That season, Edward won a series high nine times, three of which came in the final 10 weeks. However, finishes of 29th and 33rd during the Chase while Johnson also won three times and never finished worse than 15th were enough to cost Edwards the title. Last fall, it seemed like he had learned, not taking as many risks that sacrificed wins in place of consistency with no finish worse than 11th. Different approach, same result, and Edwards lost it again as Stewart won five of the ten races, good enough for a tiebreaker title.

But can Biffle learn anything from all this?

It helps that Edwards is his teammate, and if the driver of the No. 16 3M Ford finds himself at Homestead in the same situation as his teammate last year, then there might be advice to be shared. Not only that, but Biffle too has lost a title before. In 2005, which has been his best season to date, where he won six times and had 21 top-10 results, Biffle narrowly missed the championship by a mere 35 points. A loose wheel at Texas with just a few races remaining spoiled what would have been a solid outing, and cost him probably close to the margin by which he eventually lost the title. Then there were poor performances at Talladega and Martinsville, tracks Biffle continues to struggle at today. More importantly, these two tracks still remain in the final ten races and Biffle will need strong outings there in the fall. We saw how dominant he was in the Daytona 500 this past February, and that should be taken as a good sign for the upcoming race at Talladega. He finished 13th in the first race at Martinsville this year–not his worst effort–but he will need to drive the wheels off when the series returns there in October if he has any hopes of hoisting the Sprint Cup.

Just two months into the season, surprising names have already established themselves up front. While Greg Biffle has been at the top before, he is now 42 and most expected his better days to be behind him. Well, not only does he look to be back with a vengeance, but he is on pace to have his best year ever. We still need to wait until the series goes to some of the more diverse tracks on the circuit to see if he maintains his strong start. If he can, Biffle will look to break the curse that has haunted several other top-name drivers and make history in doing so.