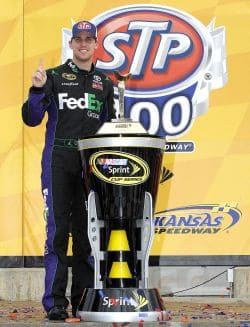 *Did You Notice?…* Parity in the Cup Series only goes so far… and can hurt the sport as well as help it? This season, we’ve seen wins by four different organizations in eight races, with all four manufacturers represented. The sport’s “New York Yankees,” Hendrick Motorsports, is stuck at zero (and the well-documented 199 career trips to the Winner’s Circle) while the victories have come from Roush Fenway Racing (two), Penske Racing (one), Stewart-Haas Racing (three), and Joe Gibbs Racing (two). Overall, if the season ended now, seven different car owners would be represented in the Chase. That sounds pretty decent… right?

To a degree, yes. Those same seven organizations – add Hendrick, Michael Waltrip Racing and Richard Childress Racing to the winners listed above – also account for all 40 top-5 finishes in the series. That means on any given week, we know the contenders are pretty much going to come from those 20 cars; that’s a good number, an aura of unpredictability where you don’t know exactly who’s going to challenge for the win on any given week. But why is that number also important? That number 20 also represents the number of teams competing for the Chase; remember, the two “wild cards” will be the drivers inside the top _20_ in points, not already qualified who have the most victories.

Denny Hamlin enjoyed Victory Lane in Kansas…but how many teams are really capable of getting there at all?

What does that mean? It means that within those “power teams,” as the season unfolds, the sense of urgency is minimized during these early 2012 events. Take Kasey Kahne as an example. Initially, up until a few weeks ago I thought making the Chase would be a near impossible task, with bad luck and poor on-track performance leaving him on the cusp of falling outside the top 35 in owner points. But with only 20 cars truly capable of running inside the top 5 in any given week (Kahne is within that group) it makes it easy for him to make the gains needed to get inside the “Chase window.” Already, he’s just 21 points outside the critical 20th-place points position you need to make the playoffs, as long as you start racking up some victories. That means an eighth-place finish for him is great at this stage; there’s no need to push it, and the No. 5 car can just concentrate on a few select races when they know they’re rolling out a Chevy capable of challenging for the win. Same with his teammate, Jeff Gordon; at 18th in points, a victory this Saturday night at Richmond means all the ugly on-track issues for Gordon in 2012 would be erased. All of a sudden, he’d be in the Chase as the second “wild card” if the season ended right then and there.

Some of these scenarios could be contributing to a lack of side-by-side competition throughout the field, as we’ve hinted at in this column in the past (NASCAR’s own raw data, by the way, backs that up; both lead changes and green-flag passes are down significantly so far this season.) If the championship is what you’re aiming for, and you feel like you’re in good position right now, with eighteen races still remaining, there’s a whole chunk of time there where you can “tread water” or experiment without fear of falling behind. Also, with only seven organizations in contention, each fielding multiple cars, it can also set up a dangerous scenario where the one “winless” driver gets set up with the best equipment late in the regular season to make the Chase. Take Penske Racing as an example. If Brad’s already in with three wins by August, why not put your best foot forward with the No. 22 Dodge and give AJ all your attention down the stretch? With more limited competition up front, your chances of making that gamble work increase dramatically.

The falloff between these 20 cars and the rest of the field is mighty steep. There’s only four other organizations (and five cars in total) who have scored a top 10 this season: Earnhardt Ganassi Racing (both cars), Richard Petty Motorsports (No. 43), Wood Brothers (Trevor Bayne, No. 21), and Phoenix Racing (Kurt Busch, No. 51). Add in Marcos Ambrose (RPM) and the single-car outliers Regan Smith and Bobby Labonte, driving for Furniture Row and JTG Daugherty, respectively you’ve got maybe 28 cars in total capable of a top-10 finish outside of Daytona and Talladega. The rest? We’ve got about eight moderately-funded programs, from Germain Racing to Front Row Motorsports, who just don’t have the chassis or the top-level cash to fully contend. Two of those teams are in danger of starting-and-parking on any given week. Then, the rest of the starting grid, from 37th to 43rd, is filled with jalopy-type, seriously underfunded efforts who will park within 100 laps 90% of the time with “mechanical” issues.

Looking for NASCAR’s middle class, the type of program that mixed up the running order with the occasional top-10 finish in the late 1990s and early 2000s? Keep looking; it’s virtually disappeared. Parity is ripe among the rich, but for the bottom half of the grid each week it’s become all but hopeless to both achieve the sport’s ultimate goal (make the Chase) or its consolation prize (a top-10 finish, which in turn generates at least minimal media exposure). That clear separation can also lead to single-file boredom; after all, when you’ve got 20 cars just making laps, trying to survive, that reduces the amount of drivers you actually are racing hard against for position.

NASCAR’s whole goal was to even the playing field. But is this result exactly what they wished for?

*Did You Notice?…* Where you start is no guarantee of where you’ll finish? Four of the top five drivers in average start this season have yet to win a race this season; what’s more, three of them have combined to lead a _total_ of just five laps. Here’s a snapshot:

Of those five, only Biffle has cashed in on Victory Lane, also doubling as the only one to actually _improve_ on his average start by the checkered flag. While Kahne’s struggles have been well documented, the driver that actually sticks out the most on this list is Logano. In a contract year, he’s slipping an average of seven positions per race, wasting those track position opportunities, which is a sign the team isn’t keeping up with adjustments during the event. In fact, he’s earned just three lead-lap finishes, a shocking number considering that 12th-place position in the standings. If he’s looking for a vote of confidence from Gibbs, those numbers need to improve.

*Did You Notice?…* Quick hits before we wrap up this edition…

– If you think I’m avoiding the Pattie Petty / Victory Junction Gang Camp situation… you’re right. Why? We’re talking an internal family squabble going public, one that’s getting more bizarre by the minute where I don’t think we’re playing with a full deck of facts quite yet. Here’s what’s troubling to me: Pattie Petty and Austin Petty are quoted as having not verbally spoken since Valentine’s Day. Instead, they’re sending out different public statements in which they appear to be posturing for power within Victory Junction. Meanwhile, Kyle Petty says he has absolutely nothing to do with what’s going on between them. People, we’re talking about a married couple and their lone surviving son! Last I checked, families aren’t supposed to be communicating about private matters through the press. Something’s not right here, and for a family that has experienced so much tragedy the only reaction I have so far is sympathy. I hope the three of them figure this out; they’ve already been through too much to start shooting themselves in the foot over a charity that, by and large, is one of the most well-respected in the country.

– Looking for a break from Danica-mania? Then you can’t shove Travis Pastrana into a car soon enough. The X Games star makes his Nationwide debut this weekend, but beware what you wish for: his best finish in six K&N Pro Series starts is 12th place. The equipment he’ll drive this weekend, run by RAB Racing in a co-op with Michael Waltrip & Company, is capable of a top-5 finish. _If Pastrana keeps it in one piece,_ (a key portion of this sentence) it’ll be interesting to see how far behind the curve he’ll actually be. 20th? Reasonable start. 30th? A troubling sign he’s a loooong way from making an impact at even NASCAR’s “AAA” level. As in years.

– Coming back from six days in the Dominican Republic for a destination wedding (not mine) and I couldn’t find one native that knows a thing about NASCAR. Was I expecting to? Not really, but they sure knew a lot about the stick ‘n’ ball sports! (Especially baseball, as you might expect). Just a subtle reminder that the stock car phenomenon remains a mainly American obsession; in this increasingly global world, it makes me wonder if the sport should be doing more to promote itself overseas. But then, you think about all the economic troubles within NASCAR’s own house and maybe it’s a lower priority? Just a thought… what happens when you have too much time on a plane.