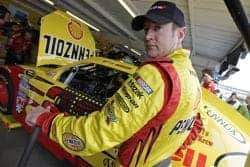 FanVision held their NASCAR debut at Daytona International Speedway during the Budweiser Shootout on Feb. 18, 2012. FanVision is a dedicated controller used to enhance a fan’s experience at live sporting events, much like the Sprint FanView used in NASCAR from 2006-2010. The lineage of FanVision traces back to 2001, when Canadian motorsports enthusiast and amateur racer Marc Arseneau had a vision of fans sharing his passion for racing through a live, interactive experience, in which Kangaroo Media, Inc. and Kangaroo TV were born.

In 2003 the first generation controller was in operation solely at Champ Car events. Over the years, the device was revised and in 2005 they signed a deal to work with NASCAR, as they began using the controllers at the first race of the 2006 season under the name FanView. In 2006 Kangaroo Media also signed a deal to work with the NFL, through DirectTV. After also trying out the controllers at Formula One races in 2006, Kangaroo TV launched its first full season in Formula 1 at the Australian Grand Prix in 2007. In 2009, the Miami Dolphins became the first NFL team to sign on with Kangaroo TV. Later in the same year, Dolphins owner Stephen Ross purchased Kangaroo Media and has been offering the FanVision controller and service at various sporting events around the world ever since.

Ross explained the impact of having his product at sporting events and how it will change the way fans watch sports to NBC’s Darren Rovell.

“The whole production at home has become so sophisticated, the broadcasters have really grown that much, and when you go to the game, it’s the same old same old. I think today, people want technology and they want connectivity. So, they are looking for something else. Once we create this in venue network where it is in every single sport, fans are going to look to this; it’s going to be part of the experience in going to the game.”

Ross went on to explain that NASCAR fans are given the total package with FanVision, because sitting in the seat doesn’t allow fans to see what’s really going on around them, which in turn, makes FanVision a necessity.

“Improving the fan experience at-track is a key component of our five year industry action plan,” said Steve Phelps, senior vice president and chief marketing officer for NASCAR, in the official FanVision press release. “By upgrading to FanVision, we will be offering the fans who attend our races an enhanced live event experience that allows them to further engage in the sport. This will certainly not be the last upgrade we make at track but it’s certainly a significant one that will have immediate impact on how the sport is consumed.”

A few of our own “frontstretch.com”:https://frontstretch.com writers have used both FanVision and the previous FanView controllers. “The video is very high quality (better than its predecessor) and allows fans to see the action or a replay from a different angle. It was great to be able to check the entire running order without having to wait for the scoring pylon and the various graphs and charts it provides for telemetry are interesting and informative,” said Amy Henderson after using the FanVision in the Martinsville media center this spring. Henderson went on to say that she found it to be a great product and, “any fan who rents it for a weekend will get their money’s worth.”

With the aid of FanVision, fans are able to listen to the latest uncensored belittling and dressing down by Kurt Busch.

Henderson’s favorite feature was the ability to play back the scanner feed. “So many times I’ve either caught the tail end of a conversation or wanted to hear it again to quote (for transcribing an article),” Henderson said. “And with this device it was available instantly.”

If you have ever used a scanner at a race, or only managed to attempt to use one, as is the case for me, you would be able to appreciate the user-friendliness of FanVision.

“I’ve used everything from an old 30-channel scanner that had to be manually programmed (and you’d better remember who was programmed for what channel!), to a more modern scanner that programs automatically at the track and tells you which team you’re hearing (this is my current go-to), to the Sprint FanView before trying the Fan Visions and I found this to be a fantastic product,” according to Henderson. “It was easy to use, even for someone who isn’t a computer scientist, the size and shape were comfortable to hold and carry. The features were varied and interesting to try out, though too many features could be distracting during a race, and I found myself using mainly the scanner and playback features when the race was under green.”

Not all is perfect with the product. As “frontstretch.com”:https://frontstretch.com writer Summer Dreyer stated on twitter at the Kansas Camping World Truck Series race this past weekend, “Not digging the new FanVision. You can’t just type in the number of the Truck you want. You have to scroll through a list.”:https://twitter.com/#!/SummerDreyer/status/193786821812027392

Henderson also stated that the driver info for the NASCAR Camping World Truck Series was not complete and had a lot of blanks as opposed to the Sprint Cup Series, with a lot of photos missing. The Cup drivers in the NCWTS race had incomplete info when they were on track for the truck event, and it wasn’t missing when they were driving their Sprint Cup cars.

Unfortunately, your old FanView device is not usable anymore. If you purchased it from a Racing Electronics dealer in 2008 or later, you may be eligible for a credit up to $250 towards the purchase of a Generation 3 FanVision controller. These new controllers are also compatible at all participating sports venues outside of NASCAR as well.

FanVision controllers are available to rent or buy at top three NASCAR race levels, provided the lower two series races are at a companion Sprint Cup race weekend. The controller automatically adjusts to whatever series is on track at the time, so there is no need for fans to have to switch between the Sprint Cup and other series.

The cost to buy a new controller is a little less than the old FanView system. You can purchase FanVisions for under $300, but you must also subscribe to the service at the event, however single weekend subscriptions are $19.99. This includes all the races during that weekend. If purchasing is too large of an investment for you, because you only attend a couple races a year or you just want to try it out, the option to rent is always available.

FanVision has a 4.3 inch LCD display with 8.4 Mbps continuous video streaming. It is live race broadcast, both video and audio with instant replays. The controller features 8 in-car cameras with radio scanner for all cars, and you can track up to three of your favorite drivers. It also has driver updates and comparisons, driver stats and bios, including live stats for all race series. You can find NASCAR Twitter feeds, NASCAR news feeds, race schedules, track information, race results and championship standings. The display also offers the option of split or full screen.

The FanVision battery, when fully charged, should provide up to six hours of continuous data and video streaming. It can be recharged by using the wall charger. FanVision provided “frontstretch.com”:https://frontstretch.com editor Henderson with an extra battery and charger when she tried out a controller, and was very pleased with the service.

“It does a ton, is easy to use,” Henderson said. “I’m very impressed! And I never get impressed with electronic gadgets.”