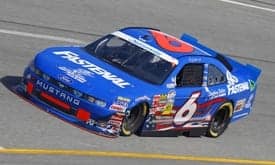 One year ago, a simple change to the points system gave the Nationwide Series its first series regular champion since 2005. And though Ricky Stenhouse Jr. scored two wins and was a top-10 fixture in 2011, it was still a year that saw Sprint Cup drivers utterly dominating the season stat sheet, even if that didn’t equal points.

Not so in 2012. Between red-hot starts for title contenders Stenhouse and Elliott Sadler, Nationwide regulars have won all but one of the season’s first six races. Now, the point leaders actually have further legitimacy to their spots atop the standings. They’re a threat to win wherever the race is being run and able to run with any part-time all-star that chooses to double dip.

But after a lengthy hiatus from regular racing, the next big challenge for the Nationwide Renaissance is on the horizon… taking back Richmond. It’s been nearly eight years and some 15 events since a then-Nationwide regular Kyle Busch won from the pole in the spring of 2004 at RIR. Can yet another one of many ugly Nationwide Series streaks come to an end tonight? Here’s four guys that could make it happen… and why they won’t.

While Ricky Stenhouse Jr. has run well at Richmond, the numbers say that won’t happen in the spring race.

*Ricky Stenhouse, Jr.* won his 2011 title on the back of short-tracking, scoring both of his wins at the Iowa Speedway (which, notably, is the closest thing to a sister track RIR has). The No. 6 car hasn’t finished worse than 11th in the last six NNS short track events, and was a poor strategy call away from winning in dominating fashion at Bristol last month in 2012’s only short track race to date. Stenhouse is now the sole horse in the Roush Fenway Racing stable, and that’s a role that suited him just fine two weeks ago. In his first weekend being the team’s lone driver, he won convincingly at Texas.

That being said, one look at the stats sheet shows a predictable trend for the Mississippi-native at Richmond. He runs well… in the fall. In the last two fall races at the track, the No. 6 finished fourth and third. The two spring races in that span? 20th and 21st. I’ll take Stenhouse as a contender to break the stranglehold of Cup regulars in Virginia’s capital city… in September.

*Elliott Sadler* is one of the home-state boys that will suit up Friday night for the latest race on one of Virginia’s crown jewel bullrings, and there won’t be a driver with more on the line in the field. For one, despite a scorching start to 2012 with his first two NNS wins in 13 years, Sadler lost a ton of momentum in the series’ last race, fading to 12th as his nearest rival rode off into the sunset. The No. 2 team may well still be leading the points, but it’s no longer the class of the field. What’s more, Sadler’s disappointing result came on an otherwise stellar night for RCR (top-5 finishes for both Paul Menard and Austin Dillon).

There’s probably no driver in the field that’s hungrier to win at RIR specifically than Sadler. Being a native Virginian is motivation enough, but even more so, Sadler has come oh-so-close to tasting victory here. Don’t forget that in 2005, he came to the white flag leading the race, only to get all but dumped in turn 2 by Carl Edwards. Ample reason to charge hard and win, but Denny Hamlin’s kind of got the Virginian bid locked up.

*Austin Dillon* has taken to the Nationwide Series like a fish to water following the 2011 Truck Series championship, scoring five top 10s in the first six races of the season. What’s more, like Stenhouse, Dillon has enjoyed tremendous success at the similar Iowa Speedway (a win and a second-place finish in his two full seasons of Truck racing). Problem is, that’s about the only short track that Dillon’s been a force on. RCR has had no shortage of success at Richmond, but with three cars in the field for Friday’s race, it won’t be the No. 3 car carrying the organization’s banner.

Just like *Sam Hornish, Jr.,* the Richmond International Raceway is no longer a part of IndyCar racing. And just like open-wheel racing on a short track never proved a winning combination, there’s no way the No. 12 will outpace the No. 22 on a track similar to those teammate Brad Keselowski cut his teeth on (and has won on, to boot).

Who else? JR Motorsports isn’t in contention to win races at this point in the season, Trevor Bayne’s riding the pine, and though James Buescher is on a tear this far into 2012, it’s hard to see the Red Sea parting on the final lap at Richmond the way it did for the No. 30 at Dover.

Call it cynicism, but with Harvick, Keselowski and Hamlin all entered in tonight’s race, this one just has that feeling of being more of the same dominance by the double dippers… even amidst the resurgence of the Nationwide regular.