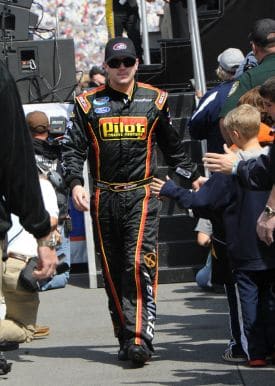 We raced most recently at Texas Motor Speedway. We enjoy getting top-10 finishes, but our car was better than ninth. At this point, we’re glad to have it. We were moving forward all day. I think it was about halfway through the race we restarted 14th, drove up to seventh, got into a lapped car and put a hole about the size of about the right front headlight, pretty much a hole through the right front headlight. Then we couldn’t get a caution to try to get a chance to work on it. I had to come in for a green flag stop and at that point, we didn’t really know how bad the hole was so we didn’t have the right stuff there to patch it. With it being a green flag stop, we didn’t want to spend too much time on damage.

Michael Annett and team have come a long way since their rushed Daytona debut, and are now knocking on the door of some serious results: he’s fifth in the season standings with two top-10 finishes in six starts.

We fell back from there to about 15th place and then got a chance to put the patch on. We ran up to about 12th and then we got a bunch of grass on the grill, overheated, and started spitting water out. With about 11 laps to go, we were going to have to come down pit road and clean the grass off. But right when we were getting ready to go in, they said debris and there was a caution. We came in, put some water in, put on a set of four lap scuffs we had on pit road, restarted I think 14th and drove up to ninth. My car was going to keep going forward until I ran into that lapped car and then it was everything we could do to get it fixed and get that top 10.

If you would have seen the nose of the car after the race, you would never believe we even finished in the top 15, it was so bad. It definitely was a testament to how good the car was.

I think one thing that were doing that’s really good is we’re bringing home cars in one piece. We’re not bringing home wrecked race cars, having to fix them and not being able to make that car better. If you can come back and just make the car itself better instead of trying to fix damage and get done quickly in time for the next race, you can help improve your performance and I think besides Daytona we haven’t wrecked a car. I think that’s a huge part of why we’re fifth in points. My team, we just talked about that adversity, they never quit. We keep going and we fight until the last lap to get the best finish we can. I think besides Daytona, the worst finish is 13th so far and that’s pretty good, especially for putting this team together a month before Daytona.

Because of our schedule, we’ve already had a few weeks off this season. There’s a few ways to think about that. Since we are a new team, we had to rush everything to get it done. Having these three weeks off that we’ve had recently, it gave us a chance to get everything how we wanted it. Everything in the cars is how we want it, everything down to the pit box, the trailer. All those things we had to rush and just take what we had to get to Florida, now we have it done the way we want it. But then the momentum when you come off a top 10, you want to keep going. That part kind of hurts a little bit.

Having a 16-week-in-a-row deal with no off week later this year, about eight weeks in we all want to have one of those weekends off. It’s just something that we deal with. Everybody deals with the same thing, so it’s just who performs better and deals with it.

When I did my last diary entry we were in the middle of March Madness, which I didn’t really follow. I know hockey is more my thing than basketball, but someone was talking to me the other day asking me if I was watching the playoffs and I really haven’t. A lot of times people don’t get why I don’t watch a whole lot of hockey. It’s just like how I don’t like going to races if I’m not competing in them, because it drives me crazy. I want to be out there so bad. It’s the same way for me with hockey. I’ve been to some Charlotte Checkers games and you’re sitting there and your knees hurt and you’re tapping your foot wanting to be in the game. It’s tough to watch sometimes.

We’re going to Richmond this weekend, so it’s time to think about how to get around there. The first thing you always focus on is getting a real big arc into the corner in turn one. If you can really get your car secure where you can hang it out there and do a real late entry, it seems like it helps with coming off turn two. That’s one thing we see every time we go back there, everyone is loose off of turn two because the wall comes up so quickly. It gets really narrow really quick on the backstretch. Everything you can do to get pointed better before you get to that point helps. Turn three is a pretty simple turn, we never really have too many problems there. Off four you get the big horseshoe. It opens up quite a bit there. Again, you do see a lot of guys loose off and buzzing the tires all the way down the frontstretch. Richmond is fun. There’s nothing really like it and I enjoy tracks like that.