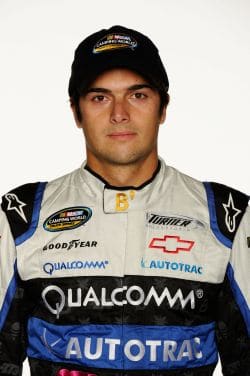 As the rest of the NASCAR world heads off to Richmond this weekend, the Camping World Truck Series enters yet another nearly month-long vacation before returning to the track at Charlotte Motor Speedway May 18th, for the North Carolina Education Lottery 200. Just last weekend, newcomer to the Truck Series–NTS Motorsports–announced their plans to be a part of Sergey Mokshantsev’s debut as NASCAR’s first Russian driver.

NTS Motorsports started out as a K&N Pro Series team before expanding to a single-truck team this season, and they’ve been participating in an “aggressive NASCAR driver development program” with Mokshantsev in anticipation for his Truck Series debut sometime this season. And while nothing is set in stone as far as his first race, “Jayski has reported”:http://www.jayski.com/cts/ctsnews.htm the team plans six to ten starts this season in a second truck.

Once he makes his debut, Mokshantsev will join several other international drivers who have competed in the Trucks Series, with two of them racing full-time as teammates for Turner Motorsports. Miguel Paludo made his Truck Series debut back in 2010 at Bristol Motor Speedway, behind the wheel of the No. 77 Stemco / Duroline Toyota for Germain Racin. Paludo started 23rd, but managed to to take care of his truck and score an impressive ninth-place finish; a result he matched in the season finale for Red Horse Racing.

The 2011 season saw Paludo running full-time for Red Horse Racing, where he scored seven top-10 finishes, including a career-best third at Michigan. So far this season, Paludo has had a tough start that saw him careen head-on into the inside wall at Daytona, resulting in a 30th-place result after having led 56 laps. However, that’s turning around for the driver of the No. 32 Chevrolet, who posted a solid tenth-place finish last weekend at Kansas.

Max Papis declared that Nelson Piquet, Jr. would not go much further in NASCAR. Do not allow Max Papis to offer any assistance with your Fantasy Football draft this fall.

Nelson Piquet, Jr. made his Truck Series debut with Red Horse Racing in the season opener at Daytona in 2010. After starting 22nd, he barely worked his way through two big wrecks that happened within the first 32 laps, but the careful driving served as a way to move inside the top 10. But while he ran in the top 10, the Brazilian made what most would call a “rookie mistake” when he failed to execute a bump draft properly, and sent Max Papis hard into the wall.

Interestingly enough, “Papis tweeted”:http://www.twitter.com/maxpapis after the wreck at Daytona “he will not go much further in NASCAR.” The funny thing is that Piquet now runs full-time and has shown marked improvement with his experience, and is generally regarded as the next likely first-time winner in the Camping World Truck Series. In fact, I’d be willing to bet he would have won at Rockingham if it weren’t for his late-race pit road speeding penalty.

Piquet piloted the No. 8 Chevrolet for Kevin Harvick, Inc. in 2010 where he scored 10 top-10 finishes, including a career-best runner-up result in Nashville. Now, he pilots the No. 31 Chevrolet for Turner Motorsports and already has three top 10s in four starts this year, including his fourth-place finish last weekend.

Looking back at other foreign-born drivers that have previously competed in the Truck Series, Max Papis spent last season running full-time for Germain Racing after making a handful of starts for the team from 2008-2010. The Italian driver made his debut at Texas Motor Speedway in 2008. Despite starting fifth, Papis ran just 16 laps that day and finished a dismal 29th-place finish. After complaining about a very tight truck, Papis made a move across Erik Darnell’s nose that sent him hard into the outside wall, causing terminal damage. He went on to finish 27th, two laps down in the season finale that year. In 44 starts, Papis boasts just four top-10 finishes, including a career-best ninth at Auto Club Speedway in 2009. Two of those top 10s came during his full-time effort where he ended up 18th in the points standings at the end of the year.

The Ice Man commeth…and goeth. Formula One World Champion Kimi Räikkönen is officially the only driver ever to eschew a factory Ferrari ride for Perky Jerky.

Of course, we can’t forget those that have run on a part-time or even single-race basis. Narain Karthikeyan, a native of Chennai, India, made nine starts for Wyler Racing (now Turn One Racing) in 2010. In his debut at Martinsville, Karthikeyan started 11th and used the lucky dog twice to score a solid 13th-place, lead lap finish. By the end of the season, Karthikeyan had just four top-15 finishes, including a career-best 11th at Texas Motor Speedway. And despite his part-time status, Karthikeyan earned the Most Popular Driver honor for the 2010 season.

Fast forward to 2011, and you find Kyle Busch Motorsports has fielded two different drivers from outside of the United States. Finland’s Kimi Räikkönen made his debut in the North Carolina Education Lottery 200 at Charlotte Motor Speedway behind the wheel of the No. 15 Perky Jerky Toyota. Despite starting 31st, Räikkönen used his track time wisely and worked his way through the field all the way to a solid 15th-place finish. According a report from SPEED’s Ray Dunlap at the time, there were plans for him to run Martinsville and Homestead, but Charlotte turned out to be The Ice Man’s lone NASCAR start.

Later in 2011, two-time Corona Series champion German Quiroga made debuted behind the wheel of the No. 51 Telcel Toyota. After starting 17th, the Mexico City, Mexico-native found himself lapped in the early stages of the race. But that didn’t stop Quiroga from using his seat time–he went on to finish 16th, albeit three laps down. Just six races later, Quiroga also piloted the No. 51 in the season finale at Homestead-Miami Speedway, though he only managed to finish 26th, one lap down. The original plan that floated around the rumor mill was for Quiroga to drive full-time for KBM this season, pending sponsorship, however that clearly hasn’t come to fruition.

As the years roll on, more and more international drivers are taking their chance to step into the NASCAR Racing world, and while not all of them have found success or a long-term tenure, it’s definitely a sign of the sport’s appeal across the world.