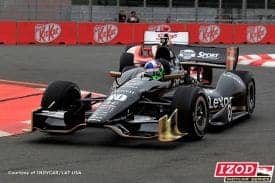 *In a nutshell:* Will Power spanked the field for a third straight year in the Sao Paulo Indy 300, delivering yet another dominant performance at the 2.536 mile Brazilian street course. Power started on pole and he never looked back, pacing the field for 63 out of the scheduled 75 laps. Five cautions interrupted the action on the day, including a yellow for an eight car accident late in the event. Power cruised home on the restart and finished the day with a 0.9 second win over Ryan Hunter-Reay. Takuma Sato finished third and earned his first ever IndyCar podium, while Helio Castroneves and Dario Franchitti rounded out the top 5. Rain threatened throughout the day, but ultimately the weather held off and allowed the race to be completed in dry conditions.

*Key Moment:* On a restart with eight laps to go, Mike Conway crowded Marco Andretti going into the first turn, leading to an eight car stack up which brought out a full course yellow flag. The caution gave second place runner Hunter-Reay a chance to make a final run at perennial race leader Power, but Power prevailed on the restart and captured the checkered flag.

*Highlight Reel:*
* Ryan Briscoe locked up the tires on lap 23 and kissed the wall, bringing out the first full course yellow for the day. This led to a series of sloppy restarts which jumbled the field around quite a bit and resulted in more than a few wrecked race cars.

Dario Franchitt’s poor luck continued in Sao Paulo where he had contact with Mike Conway but he rallied for a fifth place finish. Photo credit to INDYCAR/LAT USA

* Dario Franchitti’s rotten luck continued in Sao Paulo, as he was spun by Mike Conway on a lap 27 restart while running in the top 3. Franchitti managed to rebound to finish fifth, but the race just served to add more frustration to what could only be described as a nightmare season for the Scottish driver.

* Josef Newgarden had a solid run going before a lap 30 incident essentially ruined his race. Newgarden has had some poor luck this season, but one can’t help but be impressed by the way he has run at times this season for an underfunded Sarah Fisher Hartman Racing operation.

* Just when it seems like oval-standout Ed Carpenter is getting the hang of road course racing, he has some sort of trouble. This race was no different, as Carpenter had yet another spin on lap 62. Despite Carpenter’s continued improvement on road and street tracks, he will need to limit his mistakes if he wants to be a weekly factor on the IndyCar circuit.

* Not having an automatic restart function in the DW12 truly burned a number of drivers who got caught up in the big wreck on Lap 67. Numerous drivers lost laps simply because the safety crew couldn’t get the cars restarted fast enough.

*Notable Driver: Takuma Sato* continues to make steady improvement every week, and the former F1 driver’s consistent efforts rewarded him with a solid podium finish in Sao Paulo. Sato started a dismal 25th, but he managed to pick his way through the field and found himself racing with the leaders late in the event. The NBC Sports Network rightfully noted that Sato’s third-place finish was his best result in an IndyCar race ever. Many questioned Sato when he made the move to IndyCar back in 2010, and while there have been some bumps in the road, Sato has proven to be a reliable and capable driver, and he seems to be getting better. Coupled with a resurgent Rahal Letterman Lanigan Racing team, don’t be surprised to see Sato and his number 15 team competing towards the front more often this season.

* With Will Power capturing his third straight victory, it will be nigh impossible for anyone else to keep up with him in points unless they can go on a similarly dominant run of success. The next few races will be on ovals, which are traditionally Power’s weakness. It will be interesting to see is he and his Penske team can continue to dominate on tracks where they normally struggle a bit.

* Sao Paulo was the last race of the early season stretch of road/street races. The 500 is up next, and there will be a lot of uncertainty going into Indianapolis in regard to how the DW12 will race on an oval. Perhaps even more interesting will be seeing which team got a jump on the others in terms of development on their oval track program. If there were ever a year in which an underdog team stood the best chance of an upset 500 victory, this would be the year.

“How come Franchitti can improve 10 spots under yellow by ducking into pits before green & no one notices?” – Quote from the AJ Foyt Racing team’s (@AJFoytRacing) official Twitter account

“I think a single file restart would be helpful on street/road circuits… You? @IndyCar”-NASCAR driver Jimmie Johnson (@JimmieJohnson) on the rash of messy restarts that plagued the race.

“Full credit to the Verizon guys, Penske and Chevrolet. We’re three for three. That was a great race. A great strategy by the team.” – Will Power on his team’s dominant win.

“This fourth place is like a victory.” – Helio Castroneves on salvaging a solid finish after an up and down day.

*What’s Next:* The Indianapolis 500 Mile Race is the next event on the schedule, and the teams are already working feverishly to get prepared for the month of May. This year’s race is shaping up to be more unpredictable than ever, with a new car and new engine suppliers alike all making their oval track debut. Last year’s 500 was a race for the ages, with then-rookie J.R. Hildebrand crashing in the final corner and gifting the victory to the late Dan Wheldon. Dan will be on the minds of everyone in Speedway, Indiana throughout the month of May, and a fitting tribute will almost certainly be on tap at the track that was the sight of Dan’s last win. The 96th running of the Indianapolis 500 will take place on May 27th, and coverage starts at 12 PM on ABC. This year’s event promises to be as exciting as ever, so mark your calendars ladies and gentleman, this is a race you will not want to miss.