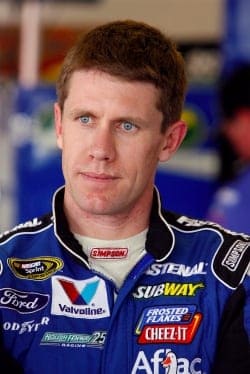 *NASCAR Sprint Cup Series: Edwards Call was Legit* With Richmond now in the rearview mirror, it’s hard to say that this week was uneventful. The controversy began with the opening technical inspection for the Nationwide Series on Thursday and didn’t end with the checkered flag in the Sprint Cup race on Saturday. The hottest topic of conversation this week: Carl Edwards’ penalty for jumping the lap 318 restart. In case you missed it, that restart was a game-changer for Edwards, who dominated much of the race but was only able to finish tenth after being black-flagged and forced to serve a pass-through penalty. Edwards and his fans are still questioning the call.

Carl Edwards’ frustration with NASCAR for black-flagging him was all for naught, but can similar penalties be avoided in the future?

There are three things to take into consideration here. First, Edwards’ team alleges that they thought they were leading. The scoring pylon at Richmond and the ticker on FOX’s broadcast showed the No. 99 on top… but it wasn’t–meaning that when Edwards passed on the poutside before the start-finish line, he was in violation of NASCRA’s rules. That error was caused because the scoring system is triggered by the transponders on each car; Edwards had edged ahead of actual race leader Tony Stewart while cleaning his tires as they took the one to go, and that put the No. 99 incorrectly on top of the pylon. In reality, there was no way that Edwards could have been the race leader, as he had pitted under the caution and Stewart stayed out, and _there was no way he could have taken the lead_ under those circumstances. NASCAR was firm that the No. 99 team should have known that. And you do have to wonder why, if Edwards truly didn’t know he wasn’t the leader, he didn’t try to push the issue before the restart and take the onside lane. That he didn’t says his team had an inkling.

Second, even if he had been the race leader, Edwards clearly accelerated _before_ the restart zone. Even though the leader controls the start, he can’t start before that area on the racetrack, and the replay shows that Edwards clearly did. So, according to NASCAR, he’d have been black flagged even if he was the leader. He’d already come close earlier in the race, making NASCAR pay close attention to him this time.

But finally, should the restart have been allowed to happen? Going forward, NASCAR could make a couple of minor changes, including reviewing timing and scoring info on the pylon or TV feed before allowing a race to go green and having a pit road official notify the team who is leading, or by prohibiting drivers from passing the leader under caution, even while scrubbing tires. Whether changes are made remains to be seen. _–Amy Henderson_

*Izod IndyCar Series: Some New-And Surprising Indy 500 Pairings Emerging* There are 33 spots on the starting grid for the Indianapolis 500 but only 26 teams competing on a weekly basis in the IZOD IndyCar Series. That means there are always one-off special combinations of owners and drivers. Dan Wheldon’s winning effort last year is proof that some of these pairings can be pretty potent in a race where just about anything can happen.

Rahal Letterman Lanigan Racing announced a deal this week for Michel Jourdain, Jr. to race the 500 with sponsorship from Office Depot Mexico. Jourdain competed in the 500 only once, in 1996, where he finished 13th, one of three starts he made in the Indy Racing League. He went on to make 152 starts in CART and Champ Car between 1996 and 2004, some of those with Team Rahal before that team moved to the Indy Racing League. Jourdain moved to the NASCAR Nationwide Series and Camping World Truck Series from 2005 to 2008 and has been racing in various rally and sports car series since. He will be classified a veteran but will participate in a refresher course in conjunction with the Rookie Orientation Program on May 10. Jourdain will run as a teammate to Takuma Sato, the team’s full time driver, who got his first podium result with a third place finish in Sao Paolo this week. The team won the Indy 500 with Buddy Rice in 2004.

With spots up for grabs, don’t be surprised to see more one-off owner-driver pairings happen before teams roll into Indianapolis. With money and prestige on the line, everyone wants a piece of the pie. _–Toni Montgomery_

*NASCAR Nationwide Series: Visual Inspection Nabs Six at Richmond… Now What?* Think the fallout from Jimmie Johnson’s C-post violation at Daytona was a big deal? This one’s has the potential to be bigger. ESPN’s pre-race show at Richmond noted that NASCAR was far from happy after confiscating six front bumpers from Richard Childress Racing’s and Turner Motorsports’ NNS teams in pre-race inspections, and there seems to be little doubt that points penalties are going to stem from what was reportedly a very deliberate effort to gain a competitive edge.

Of course, there’s the inherent problem of penalizing six race teams for equipment that never saw the race track, and thus never gained said competitive edge. But the larger issue is that, unlike the No. 48 team episode in the Cup Series, one that impacted only one race team in a series where the points get reset with 10 races to go, three Nationwide Series teams in the top 10 in points are all going to be impacted by any penalties to come. Further, there is no reset to count on, so the fallout is going to stick with Elliott Sadler, Austin Dillon, and Justin Allgaier, as well as the other teams who got caught, through all of the 2012 season.

Like the Cup Series penalty, the infractions were discovered on visual inspection. However, unlike the C-pillar, because the nose section of the car is factory designed, NASCAR has an exact factory piece for each model to compare against. But the waters are once again muddied by the fact that Sadler says his team raced with the same piece twice before–and won–and it has therefore been subject to–and passed–several previous inspections; this was a key point in the No. 48 appeal, which eventually resulted in their penalty being drastically reduced. In light of the recent appeal and subsequent overturning of a similar penalty, what NASCAR chooses to do with this is a bit cloudy. Will they come down harshly on the teams for violation a specific rule about altering a factory-designed piece, or will they back off given the recent sting of defeat on the No. 48 appeal?

Granted, this is not an issue specific to the Nationwide Series. But this story is going to impact the title chase in a big-time way. _–Bryan Davis Keith_

*Grand-Am: Rain, Rain, Go Away!* In the third race of this season, this weekend’s Grand Prix of Miami, the big story was the torrents of rain which resulted in multiple spins, sending cars off the track. At times, visibility was so low spectators could barely see the headlights from the cars. Drivers also carried the infamous “towel on a stick” to clear the inside of their windshields. With water pooling up in the corners and the grass, there were more cars spinning than wrecking from other causes, especially in turn 2, where most of the incidents happened. Amazingly, no one ended up stuck in the muddied grass, and most were able to make their way back onto the track.

Perhaps the most impressive spin came from Barber Motorsports Park winner, the Spirit of Daytona No. 90, with Richard Westbrook behind the wheel. Leading the race following the second caution period for heavy downpours, Westbrook hit a large puddle in turn 2 and spun, thanks in part to some help from Enzo Potolicchio. Grand-Am officials were not pleased with the contact by the driver of the No. 8 Ford and assessed a stop-and-go penalty that dropped his team to fifth in the Daytona Prototype running order. The problems for the No. 8 team continued when they spun, ultimately forcing a pit stop for cleanup. With nearly an hour remaining, officials chose to throw the white flag in the interest of safety, giving SunTrust Racing their first win of the season in the Daytona Prototype class. In an impressive run, the No. 69 Ferrari, piloted by Jeff Segal at the time (teammate Emil Assentato), took the GT Series lead under green flag conditions and held on through pit stops, giving the manufacturer its first victory since November 2003.

But even after this impressive victory, the rain was what will be remembered by most fans. And though all ended well, could there have been more precautions taken to keep drivers safe? _-Rick Lunkenheimer_

*Short Tracks:* Josh Richards has decided to make the ultimate leap of faith in his young career, relocating to Charlotte, NC, and giving up a second place standing in the World of Outlaw Late Model Series in order to try to find a full time home in NASCAR. Richards has made several starts in the Camping World Truck Series for Kyle Busch Motorsports and had hoped to make the move to a full-time Truck ride for 2012. Unfortunately for Richards, that did not materialize; so he made the last minute decision to return to dirt for the season. Now he is very close to announcing a NASCAR ride in the next week or two and so has chosen to get out of his family ride and focus all of his attention on the asphalt world of NASCAR.

For this past weekend, the Richards family decided to put Tim Fuller in the two-time series championship seat, which was a boon for Fuller. The 2007 World of Outlaw Late Model Rookie of the Year had just decided to abandon his own efforts at chasing the series, so this is an opportunity of a lifetime for Fuller to show what he can do in top flight equipment.

Nothing is guaranteed beyond this weekend for Fuller or the Richards’ house car. Fuller finished in fifth place in the North Alabama WoO event, for a good start to the weekend. The second race, at Tazewell Tennessee, didn’t end quite as well for Fuller. He came home in 18th place in the fastest 50-lap feature in the history of the World of Outlaw Late Models.

What is up next for both Fuller and Richards is anyone’s guess at this point. Fans will certainly find out over the next week or two what the future holds for both drivers and the Richards famous house ride. Stay tuned; this could be a big step for two up-and-coming young stars. _-Mike Neff_