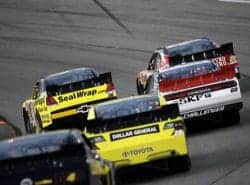 If you listened to the hoopla surrounding the Nationwide series Friday night, you’d have thought that the only driver making his debut in the series was the driver of the No. 99. While there is no doubt that Travis Pastrana is a _huge_ media figure and is bringing a myriad of attention to the sport, he wasn’t the only first-time competitor in the Virginia 529 College Savings Plan 250. Ryan Blaney, the son of Cup Series driver and former World of Outlaws Sprint Car Champion Dave Blaney, also made his first career Nationwide start. While he isn’t a media darling with nearly 360,000 Twitter followers, Ryan Blaney is a racer who has been paying his dues and made the most of this opportunity.

Blaney is only 18 years old, but has been racing for most of his life. He’s won over 25 races in Legends cars. In 2007, he was the Young Lions champion at both the Summer Shootout and Winter Heat at Charlotte Motor Speedway. Blaney also has an impressive resume in quarter midgets, compiling over 100 wins in three different classes including the Grand National Championship in 2009 in the Heavy AA series, 2007 World Formula Gasoline Alley National Champion, 2008 Eastern Grand A-Main Qualifier in Light AA and 2009 Eastern Grand A-Main Qualifier in World Formula and Junior Half.

Ryan Blaney leads a pack of cars at Richmond en route to an impressive seventh-place finish in his first ever Nationwide Series race.

Blaney was also impressive in his first ARCA race, scoring the pole at Winchester Speedway in Indiana in 2011. He led 154 out of the 200 laps before cutting a tire and coming home in sixth position. At Raceway Park in Indianapolis, Blaney led 67 out of 203 laps in the race and finished second to series champion Ty Dillon. Blaney also moved into the heavier cars of the K&N series in 2011 and scored a victory at Phoenix in November in just his third career start in the developmental series. This season he scored a runner-up finish in the season opener at Bristol in the K&N East series.

Friday night at Richmond, Blaney qualified his car in the eighth starting spot and ran in the top 15 for the entire race. His team approached the event with the attitude that they did not want to shoot themselves in the foot, so they took their time on pit stops to make sure they didn’t make mistakes. It cost them some track position but it prevented them from making a bigger mistake. Dave Blaney reminded everyone after the race that this is still a learning process for his son and the team and they would rather give up a little by getting things right. “He’s been practicing with his guys but you just have to go through the races and gain the experience, and know how far you can push it,” explained the elder Blaney. “We were running good enough tonight that they were just preaching to him, just not mistakes that will cost us. It cost time but not like a lap or a mistake. All went well.”

In the end, Ryan Blaney was in the top 10 for good by lap 225 and came home with a solid seventh-place finish. While he didn’t garner the attention of the media masses that Pastrana did, fans who paid attention were treated to a very impressive run by a future star of the sport.

After the race, Dave weighed in on his son’s performance. “I’ve been proud of the way he handles himself for a long time. To race around the guys he raced with tonight, he earned a lot of respect,” said Dave Blaney. “I watched how he raced everybody and how everybody raced him and that is priceless right there,” the elder Blaney said. “It doesn’t surprise me that he did very well. That was surely beyond everyone’s expectations but it was a great car and he was flawless in it. He ran fast and made good decisions and was just flawless. That’s what you get.”

The younger Blaney was also understandably happy after his effort Friday night.

“It was a real good night for us,” the younger Blaney said after the checkered flag. “Everyone at Tommy Baldwin Racing and Seal Wrap, Heavy Duty, these guys worked so hard at getting me a good car for this weekend. We were real good in practice, it was just a real good day. We were real consistent in practice and then qualified up there and ran with the best guys. It just took our car 35-40 laps to really get going where we could really mow guys down. Before that we were kind of average and weren’t the best in dirty air, but I definitely learned a lot on pit road and racing with all of these good guys. It was a really good day for us.”

Ultimately, the young driver said, it was his previous experience that helped to prepare him for his Nationwide debut. “There isn’t too much of a difference [between a K&N car and a Nationwide car.],” Blaney explained. “The K&N East cars are definitely more similar to these cars with the big springs and all that. We’ve tested this car before and ran 100 laps in practice today just to get me comfortable with it. With all of the ARCA races and K&N races I ran definitely had me ready for this.”

There are many different avenues that drivers can follow to get to their ultimate goal of racing at the highest levels. For Ryan Blaney, it’s been a matter of putting in in a lot of laps in full-bodied stock cars, and it showed on Friday night at Richmond. Blaney made a case for himself as a future force to be reckoned with in the sport with his impressive, methodical run. Darlington will most certainly be another test for the young driver, but it will be very interesting to see if he can, once again, best his fellow rookie Pastrana, since they’ll both be at the Lady in Black in two weeks.