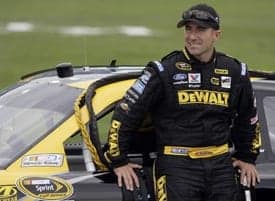 *Did You Notice?…* During a resurgent year for Ford, Richard Petty Motorsports as a whole has fallen behind the curve? That ugly fact is what’s spurring this move to bring on a top-quality crew chief, Mike Ford, more than anything else. Aric Almirola, in nine races, did not have a large quantity of time to work with Greg Erwin in order to show whether or not the pair could be a success; after all, the driver has just 44 career Cup starts to his credit.

But across the way, RPM’s marquee name, Marcos Ambrose, has been struggling just as much as Almirola. Combined, they’re outside the top 20 in points driving for an organization that surged to 15th last season with AJ Allmendinger, seemingly on the verge of making the Chase. That momentum should have been boosted, despite Allmendinger’s departure, by a Ford operation that’s come out of the box swinging in 2012. Consider…

After his team enjoyed its most successful season in 2011, Marcos Ambrose and RPM teammate Aric Almirola are struggling so far in 2012.

* All three of Roush Fenway Racing’s teams: Greg Biffle, Matt Kenseth, and Carl Edwards are inside the top 10 in points. Biffle and Kenseth have each won a race in 2012, while Edwards led 206 laps Saturday night at Richmond. If not for a controversial restart call, that number could be three of nine. Ford’s primary team has also scored 17 of a potential 27 top-10 finishes (63%), earned two poles and has yet to record a single DNF.

* A condensation of RFR’s resources, trimming from four teams to three in theory increases the quality of support for their chassis and engines package being farmed out to RPM. Every other program receiving RFR equipment does not have the funding for the full-time “A” package; Germain Racing, Front Row Motorsports, and the Wood Brothers are either running a limited schedule or purchasing “B” level equipment.

Unfortunately, instead of riding the coattails of Ford’s top dogs, like Stewart-Haas Racing has done with Hendrick Motorsports (even outperforming them in 2012) RPM has been busy hitting a wall. Their position in points isn’t due to DNFs (although the teams have one apiece); it’s due to cars not having the speed to compete. Poor performance equals perfect timing for Dodge, in desperation mode with Penske Racing’s pending departure and a manufacturer who has come swooping in, dangling a lucrative offer to make RPM their primary focus in 2013. But the organization’s top active investor, Andrew Murstein and King Richard aren’t stupid. They both understand Dodge doesn’t have a full-time engine program without the support of Penske Racing, and even the motors that are being produced have struggled (see: EFI failures for both Brad Keselowski and AJ Allmendinger). There’s a lot of pluses to running the Dodge nameplate, certainly when you consider the Petty last name, but it’s not a deal RPM can just jump into.

That’s where the hiring of Ford comes in. Ironic, because the man with the same last name as the manufacturer is now charged with making the Fusions work, taking over the shop in the same way Joe Gibbs Racing hoped Darian Grubb would invigorate the organization far beyond the No. 11 Toyota. RPM is a two-car program that needs to find out whether their problems are internal, with personnel, or with the RFR-provided cars themselves. A veteran like Ford can head that evaluation, and he’s not attached to the Roush Fenway hierarchy (like Erwin was), so if RPM does move to Dodge, it allows them to sever ties with less of a mess.

Strange, right, that a move is more about an organization than a driver? Certainly, though at some point Almirola will need to step up in performance. As his previous tenure with DEI showed, in 2007-09 it can be hard to sell sponsorship for the young man and one top-10 finish is not going to cut it.

*Did You Notice?…* Dale Earnhardt, Jr.’s resurgence hasn’t exactly come with a surge in NASCAR popularity? The sport’s most recognizable name has made a name for himself on track in 2012; to date, his worst finish is 15th and he sits just five points behind Greg Biffle for the points lead. It’s a spot atop the standings Junior should own after Talladega; in four-plus years driving the No. 88 car, the restrictor plate specialist has two top-5 finishes and no result lower than 13th in the Spring race at the big track.

Will it take Earnhardt leading the points, something he hasn’t done in his tenure at Hendrick, to make an indifferent fan base pay attention? After all, through the years NASCAR CEO Brian France has continuously brought up this man’s struggles as a reason why more fans aren’t tuning in. But I would argue that, after four years without a victory, that spot atop the standings would hurt Earnhardt more than it helps. Here’s a man who, this season, is ranked 14th in laps led in the Cup Series and suddenly, nine races into 2012, he could potentially be leading atop the points? It would be the worst example of how top-10 finishes, not victories, are defining the way drivers are racing in the Cup Series.

No, I think for a legion of casual fans tuning off the sport to pay attention, Earnhardt’s going to have to actually win some races. That’s the best-case scenario for the sport, the No. 88 hitting Victory Lane deep in the heart of Earnhardt country and snapping a drought that’s approaching four years. But anything else, in particular a fifth-place finish while a Hendrick teammate like Jimmie Johnson wins, and we’re about to be faced with hype that just won’t match the fan enthusiasm.

*Did You Notice?…* The way Kyle Busch’s victory may shake up the battle for the Chase? Yes, the racing in 2012 has been less than aggressive to date. But now, what we’ve got is drivers like Jeff Gordon, Kasey Kahne and others who not only need a victory to contend for the playoffs but need to work their way to at least 13th in points. That’s where Brad Keselowski sits, the second and final “wild card” and it’s a mountain that may be impossible for some of the sport’s superstars to climb. See below:

Note the large deficits on not just the top 10 but 13th nine races into the season. Those won’t be easy to overcome, which means by race 26 these drivers would have to win not once, but twice in order to receive Chase consideration. Even then, it’s no guarantee (you don’t know what the other drivers are going to do) but at least you’re given a chance.

And taking chances is what I expect this trio to do going forward, whenever they have a car capable of victory. Kahne is in the best position, earning three consecutive top 10s after shedding the awful luck associated with a disastrous start. It seems like he’s leading up to a victory; meanwhile, for Busch the make-or-break could come this weekend. Phoenix Racing has always been a specialist on plate tracks, one of the few places the underdogs even out and even the most desperate operations have a chance to win. A victory here, and Kurt’s well on his way to bigger and better things.

*Did You Notice?…* Some quick hits before we take off…

– Brian Keselowski’s future showcases a sad state of affairs for the Cup Series. One year-plus after pulling his Daytona 500 upset bid, the elder brother of Brad has no money, no full-time job, and an uncertain future for his self-owned No. 92. Of course, if he wants to be like all the other “underdogs” these days he can bring his car to the grid and attempt to start and park. But he didn’t do that all throughout 2011, and as a result his team wound up broke. Not the example you want to send for teams who are looking to actually race over the course of a Sprint Cup weekend…

– No major penalties for the six Nationwide Series teams involved in Bumpergate? Seems like NASCAR didn’t want another controversy on its hands, ala Jimmie Johnson back in February. Or maybe they’ve lost all confidence in National Stock Car Racing Commissioner Chairman John Middlebrook? There’s no use in throwing down the gauntlet, of course, when each team winds up with nothing more than a slap on the wrist two months later. Turner Motorsports and Rick Hendrick (Middlebrook’s buddy) have a close relationship, and all those accused of wrongdoing run Chevrolets; I’m guessing Mr. Middlebrook, a former executive with GM has received plenty of free dinners from all involved.

For those who missed it: no points lost, just a $10,000 fine and probation for each of the six crew chiefs. Oh, and “probation” for the car chiefs, which is basically saying really nicely, “Please don’t do this again” before laughing about it and inviting them out for lunch. Will this precedent set the stage for NASCAR backing down? We’ll see. The true test should come when a potential Chase contender gets caught with a supposed rules violation later this summer.