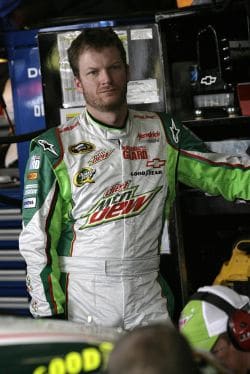 Sounds familiar, doesn’t it? It has become a recurring statement in four of the last five seasons, ever since NASCAR’s Most Popular Driver, Dale Earnhardt, Jr., teamed up with racing mogul Rick Hendrick in 2008. With Earnhardt driving in the best equipment, fans and media alike have high expectations going into every year for the driver, only to end it on a sour note.

So, is this the year that _really_ marks the return of Earnhardt?

To start, what would actually define the “old” Earnhardt? A safe bet would be the same guy, who, from 2001-2004, posted 13 of his 18 Sprint Cup victories and did not finish lower than 11th in the year-end point standings. These were the years that followed up a tremendous rookie season in 2000, when he won twice and also scored a victory in NASCAR’s all-star race, then known as “The Winston.” It’s hard to believe that since the end of 2004, Earnhardt has only visited Victory Lane three times.

Dale Earnhardt, Jr. is off to a hot start in 2012, but can he be a true contender without a win?

It has been a rough seven years for Junior Nation after the young driver was so successful in his early days. As his performance has declined, so have attendance and television ratings, which almost certainly have been affected due the lack of an Earnhardt up front. Perhaps it’s why we have been hearing the same thing at the beginning of every season lately; a new start perpetually brings new hope that Dale Junior will find his way back to the glory days. We heard it in his rookie campaign with Hendrick Motorsports four years ago, when he snapped what was then a career-long 76-race winless streak at Michigan and was a mainstay towards the top of the points all the way to the Chase. However, Earnhardt slumped in that year’s final ten races and finished last out of the 12 Chase contenders. That slump continued throughout the following season, his worst to date as he finished 25th in the final point standings. It was bad enough to get Hendrick’s attention, and Earnhardt’s longtime crew chief Tony Eury Jr. was replaced with Lance McGrew during the summer months.

Then 2010 rolled around, and everyone was back on the Junior bandwagon. With an off-season to continue to work with McGrew and a runner-up finish in the Daytona 500, the premature declarations that he was back were…well, back. While Earnhardt remained pretty solid through the quarter mark, he pretty much went MIA for the rest of the year before fading all the way to 21st in the standings after the finale at Homestead. It marked his second straight year outside the top-20 in points, and once again was another disappointing end to what had been a promising start.

During the winter months, Hendrick Motorsports again made big changes, only this time it was the entire organization that was affected. Earnhardt and the No. 88 Chevy would be moving over to work with new crew chief Steve Letarte and share a shop with five-time champion driver and crew chief Jimmie Johnson and Chad Knaus. Earnhardt basically took over Jeff Gordon’s cars and brought the AMP Energy and National Guard stickers with him. Letarte had actually led Gordon to one of his best seasons ever in 2007, with six wins and 30 top-10 finishes. However, their other five years working together had been un-Gordon-like. Even though they were all good, Chase-qualifying seasons that any other driver would love to have, they were below average years for someone who once, and still, might go down as one of the best ever. Wins started to become few and far between and the consistency was no longer as strong. Letarte was there for all of it, and was along for the ride in Gordon’s slow but steady decline.

In a bit of an ironic twist, Letarte was expected to be the catalyst for Earnhardt’s revival despite being part of Gordon’s downfall. The move did lead to mixed reviews by some, but for the most part it was generally considered a great move to have Earnhardt move into the same shop with Johnson. Once again, the expectations were back, and they only increased after Earnhardt won the pole for the Daytona 500. He came oh-so close to winning races at Martinsville and Charlotte in the spring and stayed consistent throughout the entire year for the first time in a while. Earnhardt finally finished seventh in the points, the highest he had finished since 2005. The off-season change was definitely a step in the right direction and was a vast improvement from the previous two years. Still, to say he was back would be a stretch. There were several important categories that he faltered in as he had just four top-10 finishes, only 52 laps led, and most importantly, a goose egg in the win column. While he was consistently finishing better than many other drivers, he was never really that competitive. In other words, Earnhardt was nowhere close to his glory days from ’01-’04.

So now, here we are, one fourth of the way through 2012 NASCAR calendar, and Earnhardt is back.

It certainly looks like it could be for real this time at least. It took Earnhardt just one race at Las Vegas to eclipse his lap led total from 2011 and he has already matched last year’s top 5 total with four. As it stands right now, Earnhardt is on pace for his best season ever; if he continues to go at this rate he could end 2012 with 28 top-10’s. He is the only driver to finish every race so far in the top-15 and his average finish of 7.3 would shatter his previous best of 12.1. While it will be tough to maintain this pace, Earnhardt is making a statement that he may well be a force to be reckoned with in the Chase. There is still one thing he needs to do, though, to officially mark his return, and that is to win. Before he can even think about competing for the Sprint Cup, Earnhardt must end the winless drought that will reach four years next month. He came close this past weekend at Richmond, and his most successful track, Talladega, is up next. Earnhardt is currently on the best run of his career from a consistency standpoint, and if he can’t win now, then we may never see him in the winner’s circle again.

So, there is still one caveat in Earnhardt’s quest for a comeback. No matter how well he does for the remainder of the year, he needs to prove he can still win races. Until he does so, you can’t say Dale Earnhardt Jr. is back. But it’s looking good so far.