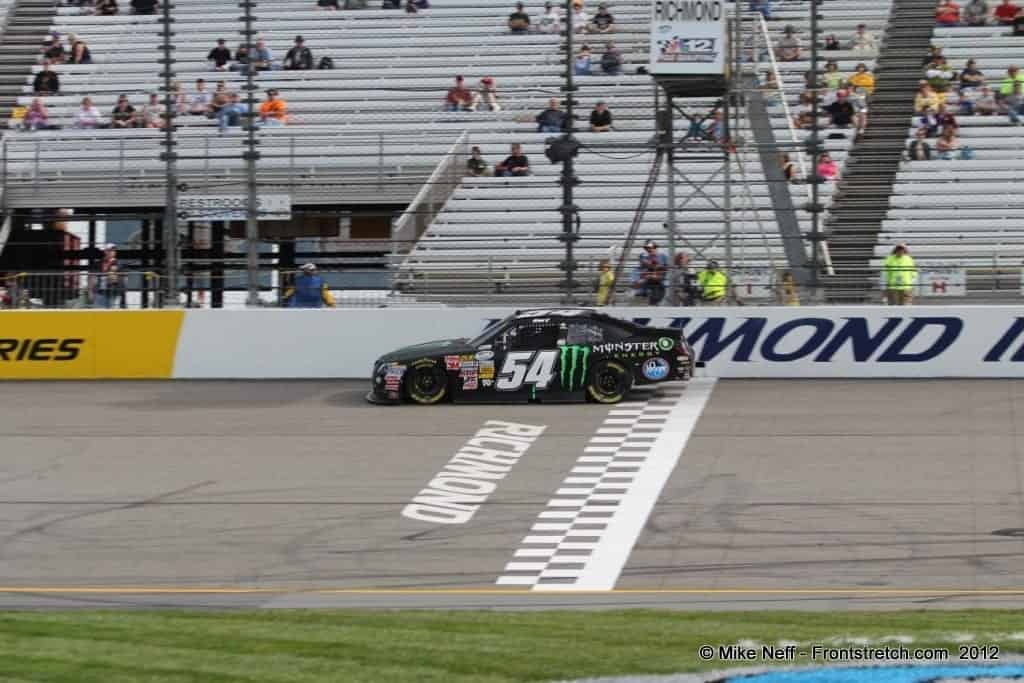 *Does team ownership really make that much of a difference?*

I never once bought the claim that Kyle Busch would calm down amidst team ownership, even with some “evidence” with hothead drivers turned gentlemen like Kevin Harvick and Tony Stewart. Sure they had their outbursts, but overall they were calmer and less of a trouble-making “it’s my way or the highway” numbskull after they started their own team.

I didn’t think that would happen with Busch. Even if he experienced all the hard work that goes into team ownership with a Truck Series team, he still didn’t calm down for very long. Eventually, he began leaving a trail of burned bridges and an angry mob behind him like dust to a car on a dirt road. He was on a lot of lists—Harvick’s included—and eventually got himself suspended.

Kyle Busch’s Nationwide program found victory lane at Richmond, a race that brought about emotions rarely seen in the driver known as Rowdy.

Then … it happened. An off-season and a move to the Nationwide Series later, and Busch finds himself fighting back tears in a Victory Lane celebration with his brother. It was one of those sappy moments you’d expect to see on an old rerun of _Extreme Makeover: Home Edition_ or _The Biggest Loser_. Heck, if we’re talking about NASCAR drivers, that sort of response would be expected from a Jamie McMurray or, a … well, actually, I don’t know. No one has yet to top that one.

Anyway, it would be ignorant to not the mention suspension as a contributing factor to Busch’s different demeanor. Obviously it had to have changed his perception on things, but I do think that the Nationwide Series is a whole new animal and an added workload can help with that “wild thing” problem.

Not that it’s necessarily a problem, nor do I think it will go away. Even Stewart can’t help but tangle with the media every so often, and the season wouldn’t be complete without Harvick starting (or finishing) trouble with someone. Busch will have his moments, but maybe those two teachers known as “reason” and “logic” finally got through to him.

*Is it wrong of us to want to see the debris that brings out the caution?*

At least weekly, a seemingly unnecessary caution is brought out for a supposed piece of debris no one is allowed to see. Sometimes it impacts the outcome of the race, and other times it brings a merciful ending to a long green flag run. This past weekend, it was the former that was the reason for an outcry and none other than the aforementioned Stewart made a big fuss about it – mainly because it cost him a win. However, fans and writers weekly make note of the debris cautions and if there is a need for them or not.

Here is what NASCAR vice president of competition Robin Pemberton had to say about it: “Sometimes, some people are a little more needy than others and they want to see that for whatever reason. And whatever their thought process and beliefs with the governing body (are), they think they need proof.”

Well … yeah. Yeah, they do. And for good reason. When a late race caution impacts the outcome of a race, I think the fans and drivers have a darn good reason for wanting proof. A water bottle is enough for a good laugh when the caution is called in the middle of the race with no consequences, but when it changes the course of a race? Is mentioning what was so dire to throw the yellow for it such a huge task for them?

I understand that they don’t control the TV cameras, but for crying out loud … The fans are what keeps this show on the road, and at least telling them what the caution is for shouldn’t be that difficult.

*Who was the incompetent party in the Carl Edwards restart issue?*

If you don’t already know about what happened, you probably haven’t been keeping up with NASCAR in which case I’m not sure why you’re reading this column. But, in short, Edwards was told by his spotter that he was the leader, when in fact he wasn’t, and he restarted as such. He was penalized for it—though part of the issue was his accelerating outside of the restart box—and cried foul. Edwards’s spotter claims that NASCAR told them they were leader and the scoring monitor supported that, while NASCAR says said spotter Jason Hedlesky was in the wrong.

Seriously, do these guys not do this every freaking week? If it was a scoring error—and even NASCAR admitted that the scoring pylon showed Edwards as the leader at one point—then they need to own up to it and figure the problem out. Additionally, I can’t imagine that the “official” restart positions don’t become a tad mangled if one car’s transponder crosses the start/finish line before the other’s even though technically they are scored the other way around. It’s just the way it works. So why is this suddenly a problem and where did the miscommunication occur?

Honestly, it doesn’t matter. NASCAR needs to not be so high-and-mighty about it, since all signs point to a scoring error, and in the meantime the spotters need to pay attention to where their drivers are _really_ ranked instead of what the pylon says. At least under caution. Again, I don’t understand why this is being portrayed as a new issue. How hard is it to tell second from first?

*Is this Dale Earnhardt Jr.’s weekend?*

Yeah, I know, we ask this every time they go to Talladega, but at least Earnhardt has the stats to back it up this weekend. He has everything lined up for him right now: the consistency, the momentum, equipment, and, yes, even talent. Add all that together at one of his best racetracks, and it could potentially be that moment Junior Nation has been waiting for, for almost four years now.

Then again, it’s Talladega and he could crash on the first lap. But that’s beside the point. If Earnhardt does indeed win on Sunday, it won’t be because it’s a restrictor plate race. It will be because this team is competitive as it has ever been and are showing a surge in competitiveness not many thought they were capable of. Whether that’s due to Steve Letarte, a renewed confidence in Earnhardt, or both, this team is due to break out sooner rather than later.