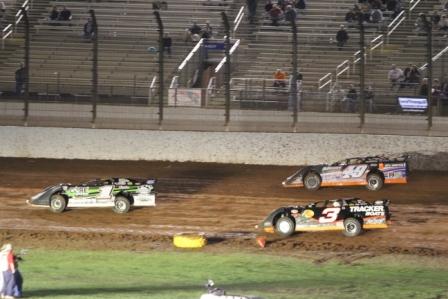 It’s been well-documented where I’m at in my career with RAB Racing. It stung really bad not racing at Texas. You know, I had 143 straight Nationwide starts which was the longest current tenure, and I also have the most starts in the history of the series. I’m not going to lie; I was bitter. It hurt like hell. So now I’ve got some new assignments in my life and we’re going to run what Nationwide races we’re going to run. I’m not going to create drama every week. I have six more Nationwide races scheduled this year.

If anybody wants me to drive their Nationwide car, just call me up. I’ll entertain some ideas if somebody wants me to drive their car while I’m not driving for my RAB Racing team. It’s important for me to be competitive. I don’t want to go back down the path of just running around for the hell of it, just running around in circles on the racetrack, you know? I want to run competitively. I just want to make that clear that while Travis Pastrana drives the car in the next six races, if there’s a race in there someone wanted me to run, I might do that. But I feel a lot better about it now. I feel really good.

Speed TV has been really good to me. I’ve been doing more TV. I’ve been doing Trackside, helping Kyle Petty out while he’s on his charity ride. I did Trackside at Richmond and will do it again this week at Talladega. So I’ve been busy doing TV.

My dirt career is taking off. I’ve had a lot of racetracks calling me now that they know I can race up to Friday nights now. I’m excited about that. We’ve run 19 races on dirt so far and I’ve won five of them. We’ve made the A-main in every single race. I’m excited; things are going good there. We’ll be making a lot of appearances there. I’ll be in Beckley, West Virginia on May 11. I’ll be driving somebody else’s racecar. I’ll be signing autographs at a Toyota dealership up there as well as at the racetrack. Until we can get the next big sponsor and get back full time in Nationwide, that’s what I’m going to be doing.

We ran at Clay County Speedway in Flora, Illinois on Sunday, and that was the debut of my Toyota motor. We tried to do it secretly; we didn’t advertise it. We were going to race in Quincy, Illinois on Sunday, and we didn’t advertise that either, but Quincy got rained out, and we found a track about two hours from our shop, Clay County Speedway, and we went up there and we finished second. I’m the first driver in the history of dirt racing to run a Toyota motor in a Modified. So now the motor got put back in the crate and sent back to Triad Motors. I told them what we need to work on, and I hope that in about one month, we’ll have exactly what we need.

I take a lot of pride in the fact that my dirt team was first. It’s been a little different. We’ve had to invent some new parts and pieces so the Toyota motor will hook up to the dirt car. So that’s why Sunday was a quiet test. I didn’t tell people we were going because it was more of a test for the Toyota motor than it was a race. I’m excited about it! Once we’ve got the motor all tuned in, the car will have a complete Toyota paint scheme and I’ll be wearing a Toyota uniform. We’re about a month away from being all Toyota on the dirt car.

Billy Smith, my crew chief is also a good racecar driver. He races every Friday night in Farmington, Missouri. Billy’s got over 100 wins, and I’m real lucky to have him. He’s more of a friend than he is an employee. Billy and I are a team together. I help him on his dirt car, and then of course, naturally he works for me on mine. We just hired one more employee for the summertime. We’ve got Tommy Boyd who’s going to work with us for three months. I tease Billy and tell him, ‘Billy, the day that you quit working for me is the day I quit dirt racing.’ Billy really does it all for me with the dirt car. But for the summer months coming now, we’ve got Tommy as well. So if you come out to the dirt tracks this summer, you’ll see me, Billy (his nickname is “Billy the Kid” Smith), and Tommy Boyd. I also have a lot of friends who help out. I usually go to every racetrack with four or five crew members. Two of them are paid and the rest of them are retired. We just have a good time!

My favorite dirt track is probably Park Jefferson Speedway in Jefferson, South Dakota. But I’ll tell you what, there are a lot of tracks that are exciting! I just got done racing in Salina, Oklahoma. But everybody knows the most exciting track is the one that Tony Stewart, Ken Schrader, and I own in Macon, Illinois. Macon Speedway is a legendary bullring, probably the coolest racetrack in the United States.

A track I haven’t run but want to is Knoxville. I really want to run at Knoxville, Iowa bad! That’s the next one on my bucket list.

I’ve had two weeks off from the Nationwide car. I would say that I’m no different than Brian Vickers. He was out of the car for half a year, showed up at Bristol and finished fifth. I’m still good. I’m still the man, there’s nobody better than me!

My Cardinals are stunning the nation! It bothered me a little bit that people thought that without Albert Pujols, we would fall to pieces. Actually, it’s the opposite. Albert has fallen to pieces and the Cardinals are doing better. I love Albert; we’re good friends. But for the people who were rude to my Cardinals saying that we wouldn’t be anything without Albert, I think we’ve answered all that! There’s a reason the Cardinals have won eleven world championships and nine of them without Albert. We’re a great organization.

The Cardinals are retiring Tony Larussa’s number. That’s exciting; I’m really happy for Tony. He deserves it. He’s got the third most managerial starts, and I’m really proud of our organization. They retired Whitey Herzog’s number and now they’re retiring Tony’s. It’s going to be on May 11th. They’re going to have Tony Larussa retirement bobbleheads. I’m going to have to have one of my friends get me one!