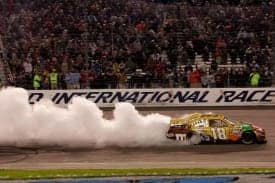 *NASCAR Sprint Cup Series: Ratings Continue to Fall* As the NASCAR season enters its fourth month, the television ratings fell for the ninth straight week after Richmond (Talladega ratings were not yet available as of the writing of this column). This is a disturbing trend for the Sprint Cup Series.

In the first nine races of 2011, rating were up compared with 2010 in seven of them. This year, not only are all nine races struggling compared with a year ago, but the races at Texas, Kansas, and Richmond all fell below those races in 2010. The trend is a difficult one, because if NASCAR makes an attempt to make races more exciting, any knowledgeable fan will know that the racing is contrived. If the races are not exciting, fans will continue to find something else to do on Sunday afternoon. But is it simply the racing that is causing fans not to tune in? The lowest-rated race so far this year was at Richmond, a track known for exciting racing.

Despite a reputation for excitement and a wild and crazy ending, Richmond saw the lowest ratings of the year…and it’s all part of a disturbing season-long trend.

What NASCAR needs to figure out, and quickly, is what, exactly, it is that is driving fans away from the broadcasts. Is it the broadcasts themselves? Is it the racing? (That’s the easy answer, for sure, but also hard to prove when the lowest rated race of the year was Richmond.) Is it, as NASCAR has suggested, the lack of performance by the perennial Most Popular Driver, who, despite having a year where he has yet to finish worse than 15th, has not won in nearly four years? Figuring out the reason is just the beginning, because once that happens, NASCAR will need to figure out how to stop the bleeding without manipulating the racing. And that could prove the biggest challenge the sanctioning body has ever had to face. _–Amy Henderson_

*Izod IndyCar Series: As Indy 500 Nears, Entry List Growing* Townsend Bell joins the list of drivers who will attempt to qualify for the Indy500. Bell will drive the No. 99 BraunAbility/Schmidt Pelfrey Motorsports Honda-powered entry, marking the third consecutive year he will drive for Sam Schmidt. Bell will run as a teammate to Simon Pagenaud, the rookie driver of the No. 77 Schmidt-Hamilton HP Motorsports, the team’s full time IZOD IndyCar Series entry.

“Speed and consistency win the Indianapolis 500,” said Bell. “Returning to Indy with Sam and his team for the third year in a row will ensure I have both those ingredients again in 2012. For the past two years, my guys have provided me a fast race car, and I know the No 99 BraunAbility/Schmidt Pelfrey Motorsports car will give me another shot at winning.”

Bell has a best finish of fourth in the Indy500 in 2009 and made a strong showing for Schmidt’s team last year, qualifying on the second row. An accident on lap 157 ended his day early.

Practice starts next weekend with Pole Day set for Saturday, May 19th. Driver and team combinations often come together throughout the month of May, sometimes at the track during qualifying days so keep an eye out for more to come, including former Formula 1 driver Jean Alesi who is expected to make an official announcement today that he will run for Fan Force United, an Indy Lights team looking to expand into the IndyCar series, with funding from Lotus. Alesi has never raced on an oval track and is expected to run at Rookie Orientation on Thursday with fellow Formula 1 veteran Rubens Barrichello. _–Toni Montgomery_

*NASCAR Nationwide Series: Is RCR Falling From the Title Hunt?* It’s a long season, but those two early season wins for Elliott Sadler already seem distant memories after another disappointing result at Talladega. Sadler lost the points lead this weekend after suffering through a damaged front end and a late-race incident with Mike Bliss as Ricky Stenhouse Jr. quietly left Alabama with a third-place finish. Coupled with a weekend that saw both Austin Dillon and Kevin Harvick swept up in a late big one, Richard Childress Racing left a track they’ve long owned with little to show short of scrap metal.

Having already dodged a major bullet after NASCAR opted not to pursue penalties for Bumpergate at Richmond, the RCR camp has missed out on a golden opportunity in recent months. With Trevor Bayne’s sponsorship woes and Carl Edwards being out of the picture, Roush Fenway Racing is in new territory as a single-car Nationwide operation. Ricky Stenhouse Jr. is on his own island now, but if the past month has been any indication, the No. 6 team has taken to that situation like a fish to water. They’re only going to get better at this as they adjust to leaning on the Roush Cup operation for info instead of a Nationwide teammate, meaning the window of opportunity for Sadler and RCR to capitalize on uncertainty in that camp has all but closed.

That Stenhouse has managed to take the point at Richmond and Talladega, two venues where RCR has history a mile long of success, speaks volumes as to just how well he is running. For Sadler and Co., it’s by no means a dangerous situation, but it’s not one they’re going to want to let continue either. After all, Sadler has tried to come from behind on Stenhouse in a points chase… and everyone knows how that battle turned out. If he’s going to do it this time, he needs to pick up the performance–and soon._–Bryan Davis Keith_

*ARCA: Can Coulter Motorsports Capitalize on Momentum?* For years, Coulter Motorsports has proven a strong, capable organization at the ARCA level… and they’ve also proven to be more vulnerable to wrecks and bad luck than just about any team competing at that level. For current driver Matt Lofton, it may well seem that way after losing on the final lap at Talladega despite leading 55 of the 94 circuits run (Joey Coulter got caught up in a massive wreck early driving the team’s second No. 61 entry). But for Lofton, his runner-up finish was a drastically needed result.

Finishing second and securing bonus points for the most laps led, Lofton cracked the top 10 in points. It was his first top 10 finish of the season, and marked the fourth consecutive event that the No. 16 team has improved their finishing position. More importantly, with Daytona and Talladega now in the books for the ARCA guys, next up are two short tracks in Toledo and the series’ debut race at the Elko Speedway, followed by an ARCA staple race at Pocono.

The significance of all of this? Lofton is a long-time short-tracker, and Pocono is a track in which Coulter Motorsports has long been strong. (Harold Holly was formerly the crew chief for the operation before moving to the Truck Series with Joey Coulter.) Lofton stopped the bleeding at Talladega, just in time for a three-race stretch in which the No. 16 team could easily make noise. The championship race in the 2012 season started wide-open with the departure of Richard Childress Racing from the ranks. It remains equally so four races in, as drivers 1-10 are all still easily in contention heading to Toledo in two weeks. _–Bryan Davis Keith_

*Short Tracks: Basset’s Third UARA Win In Question* Short Tracks – The theme of the year in the UARA-STARS series has been Ronnie Bassett, Jr. Coming into this week’s race at Kingsport Speedway, Bassett had two wins and a second-place finish. Coming home with another win looked like it was going to be difficult after Bassett clipped a cone during qualifying, which relegated him to starting at the tail end of the field. But for Bassett, that just made the challenge a little more exciting. He worked his way through the field like a surgeon, and when the field was bunched for a restart with 10 laps to go, Bassett was alongside race leader Coleman Pressley. As the green went in the air, Bassett cleanly passed Pressley and led the remainder of the race to score his third win of the season.

Post-race technical inspection, however, brought into question the validity of Bassett’s win. When the crate motor on Bassett’s car was disassembled, the surface of the head didn’t “feel” right and was declared illegal. This isn’t the first time that the UARA series has thrown out a win by Bassett, though he also had his crate motor declared illegal after his first ever win at Anderson Motor Speedway last year. Bassett Racing immediately appealed the decision so, at this point, the win still stands. The head from the engine has been sent to Ford Racing Technology for inspection and they will make the final determination on the technical violation.

The UARA-STARS series strives to ensure that the playing field is as level as possible for everyone involved in the sport. A thorough technical inspection process prevents people from playing loose and fast with the rules, but a thorough appeal process also ensures that people are treated fairly. We’ll find out this week if Bassett’s third win of the season will stand, or if he’ll have to go out and do it at Anderson Motor Speedway on June 1st. _-Mike Neff_