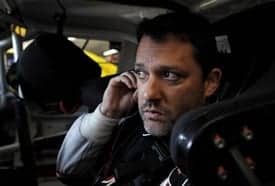 Brad Keselowski won the Aaron’s 499 on Sunday at Talladega Superspeedway, losing pusher Kyle Busch coming off Turn 4 and heading to the tri-oval.

Jeff Gordon lost a battle with the Turn 4 concrete, and in turn, opened a cork on the temperature issues that NASCAR mandated to get rid of two-car tandems at restrictor-plate tracks.

“[We had an] awesome race car, [but] this temp thing is kind of a joke,” the four-time series champion said after being released from the infield care center. “They [NASCAR] are going to have to fix that. We all knew that was going to be a big issue, but when you can’t really even race because the temps, even in a regular pack are an issue, we have to address that.”

Gordon has the standing to say stuff like that on national TV and make it stick, and NASCAR officials were most likely watching in interest when he said it.

At issue is the reduced cooling capacity available to the Cup Series cars at Daytona and Talladega. In the effort to get rid of the two-car tandems, NASCAR cut the volume of the radiator to about two gallons from five, and reduced the size of the overflow to around a half-gallon from more than two.

The idea was to make it so the cars couldn’t just stay glued to the rear bumper of a teammate or partner for lap after lap and ride around through the field.

Depending upon whom you ask, “work” is a relative term.

“It’s fun racing to watch,” said Kevin Harvick, who was involved in a crash late in the race. “I enjoy it, but NASCAR has got us in a terrible box here as far as temperatures and things like that. You run around in a pack at 260 (degrees), but I love this style racing. They just have to figure out a way to do it without the engines.”

Outspoken driver Tony Stewart had some interesting suggestions about fixing the racing on restrictor plate tracks.

Tony Stewart, who was caught up with Harvick in the crash on lap 174, took a different tack. Told that Gordon had recommended widening the intake on the grille for Daytona in July and Talladega in the fall, Stewart had a different opinion.

“I think they need to close it [the inlet] down,” he said. “Honestly, I think if we haven’t crashed at least 50 percent of the field by the end of the race, we need to extend the race until we at least crash 50 percent of the cars because it’s not fair to these fans for them to not see any more wrecks than that and more torn-up cars.

“We still had over half the cars running at the end and it shouldn’t be that way.”

He said that the overheating and temperature issues weren’t a factor in any of the crashes.

“No, not at all. I don’t think any of the wrecks were an overheating issue. That is why I say I think we ought to just tape them off solid and run them until they blow up anyway. I think it would make it a lot more exciting for the fans.”

Stewart was, obviously, talking tongue-in-cheek, but it speaks to the pack mentality that NASCAR effectively endorsed by taking away the cooling ability. It is, as Stewart intimated, a Catch-22 for NASCAR.

Take away the cooling, get rid of the two-by-two. Give the cooling back, it’s Noah’s Ark.

“Not being able to race the way we want to race is frustrating,” Burton said. “Every time we would get in the pack, our water pressure would get real high and we didn’t want to push water and that wasn’t a lot of fun.”

Regan Smith’s Furniture Row Chevrolet blew early on because of a temp issue he didn’t even know he had just 25 laps into the race, which threw a scare into the other cars with Earnhardt Childress Racing engines under the hood.

Ryan Newman and Jimmie Johnson retired from the race with overheating woes and an engine problem, respectively.

Clint Bowyer was in the mix to the end, but his Toyota was pushing water all the way on the final restart.

“She was blowing water before I even got to the line, but that was my only shot,” he said. “I wish we could find a different way to do it, but unfortunately right now we have to answer to the fans and that’s all we can do. Hopefully, before we come back here we can fix it a different way and keep it to where we can race all day long.”

That gets us back to Gordon’s point.

“There is certainly plenty of pack racing and two and three-wide racing,” Gordon said. “If you are up there you are going to push hard to try to get clean air and get to the front which I think that is great. But you can’t even run in the fifth or sixth position because you are overheating or going to overheat. I think that we all knew coming in here that the opening on the grill and some of the things were probably not sufficient. I think that would be nice next time we come back here to have a little concession for Talladega. In July, I don’t know what we are going to do in Daytona in July.”

What had been cool weather with rain on Sunday morning turned into legendary Deep South humidity and temperatures near 90 degrees. Talladega is an impound race, so there are no adjustments to be made on race morning to take that into account.

“There is just that fine line between getting the temperatures right and not being able to push,” Gordon said. “To me right now we are teetering on the side of having to be just a little too conservative. I’d like to be up there taking it three-wide, pushing cars and making some good exciting moves because I know we have a car that can be up front.”

Both Gordon and Smith had issues that seemed like gauge issues, where the temperature was not quite right with what was showing to the drivers. Electronics issues are going to be a problem until the EFI systems are de-bugged, or at least have more laps on them.

Of course, Stewart had a suggestion that NASCAR might take a look at for Daytona in July.

“I think we ought to make it a figure-eight,” he said. “It would be perfect. It would absolutely be perfect here. It would be better than what we have. That is going to be my vote next week is that we make it a figure eight and/or we can stop at the halfway mark, take a break and turn around and go backwards the rest of the way.

“Then with 10 to go we split the field in half and half go the regular direction and half of them go backwards.”

Whatever the solution—NASCAR giving back some of the intake that was taken away for plate tracks or Stewart’s figure-eight idea—something needs to be done to clean up the plate races going forward. Otherwise, there’s going to be a lot more popping off before the season ends.