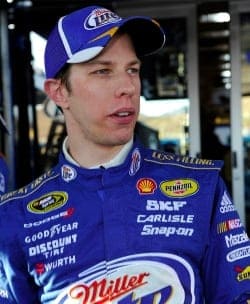 Three years. For most people, that seems like nothing – just ask couples in long-term, successful marriages – but in NASCAR terms, history has shown us it’s all you need to prove yourself. Three years into his Cup Series career, Jeff Gordon captured his first title. Dale Earnhardt? Three years was too much: he won one in his _second_ full-time season. They head a list of top-level nominees that include Jeff Burton, Ernie Irvan and Bobby Labonte, drivers who could point to that timespan as when their careers started skyrocketing from zero to hero.

Could Brad Keselowski become the next NASCAR superstar?

Let’s rewind to April, 2009 during a wacky weekend at Talladega. At the time, Keselowski was running a part-time Cup Series gig with James Finch, treading water while facing a cloudy future as the “Hendrick Motorsports protégé” over in the Nationwide Series. Sure, his gig at JR Motorsports was going great, but Mark Martin’s time at the No. 5 was even better; it was clear that if the 50-year-old stayed for at least one more season, the sign at the HMS inn would read “no vacancy” for the foreseeable future. So with one lap remaining in the Cup race, Keselowski sat a solid second yet in danger of remaining the Miss America Runner-Up, a driver fans forget about while toiling in Nationwide Series obscurity for who-knows-how-long.

But as the cars came off Turn 4 one final time, Keselowski’s move shocked NASCAR Nation. Diving to the inside, he held his line when leader Carl Edwards came down to block, gaining momentum and forcing a spin instead of backing off and letting the NASCAR superstar get the best of him. As the checkered waved, it was the No. 09 car an unlikely victor, its rookie driver heading to Victory Lane while Edwards’ car – and the Talladega catchfence – lay shattered in pieces from the confidence of a driver on the rise.

That result, in an instant forced Keselowski onto the list of top-level free agents. It would catch the eye of Roger Penske, struggling to find a complement to Kurt Busch and lead to Keselowski’s current full-time job. Suddenly, an aggressive and unique personality was met with validation; the driver’s spunk had led to success. A road to superstardom, if walked right, was paved with unlimited potential.

Which brings us to May 6th, 2012, three years and ten days after that maiden Cup Series win. Once again, Keselowski stood in Victory Lane, armed with a move in the final few thousand feet that left everyone gasping. Kyle Busch was the victim this time; no wreck, just a wreckage of shattered dreams after Keselowski “dumped” him from a tandem draft by darting to the inside while leading racing through Turn 3.

“I thought about it and thought about it, dreamed about what to do,” he said of the shift, which cost both drivers speed but not enough for another tandem to blow by. “It wasn’t easy to convince myself to do that, but it was the right move.”

Indeed. For Talladega, it was the first time in five races the leader entering the last lap went on to actually take the checkered flag in first. But while both the fan base and some drivers were in awe, the difference now is that the element of “surprise” for Keselowski has disappeared. The Michigan native now has a total of six wins, not just one, a 2011 Chase appearance and 598 career laps led in the Cup Series. With 260,000+ followers on Twitter, he’s one of the most popular drivers on the circuit. And with a long, sordid history of rivalries both ignited (Denny Hamlin) and renewed (Edwards), the past three seasons have foreshadowed the birth of a potential superstar.

Can Keselowski make that leap? Oh yes; in some ways, Sunday seemed like a weird deja vu as his career appeared to come full circle. The man’s tap of Kurt Busch, causing a late-race wreck, was ironic in literally “turning the No. 51 aside” for his benefit. The contact was an accident, but the history cannot be denied; in the timespan of two-plus years, Keselowski earned Busch’s sponsor, then outperformed the former Penske No. 1 driver and made him expendable. Yes, the elder Busch dug his own grave to the unemployment line but Keselowski’s success on the other side of the aisle made it easier for the people in suits to draw up that pink slip.

The big question is how much further can he go. Will a consistent, upward climb end the season with the No. 2 car sitting No. 1 in series points? There’s certainly plenty of obstacles, not the least of which is a transition from Dodge to Ford looming for 2013. But if there’s anything Kes has figured out so far, it’s using the Cup Series “wild card” system to his advantage; the goal is to win, not top 10 people to death in order to secure an early bid. Mission accomplished; and now, just like Greg Biffle, Matt Kenseth, and other top drivers in this year’s championship standings this driver can spend the summer testing for when the sponsors really care.

“Two wins, with the Wild Card and all, that almost makes you immune to missing the Chase,” he said. “This team is going to be strong come Chase time.”

Roger Penske, at 75, certainly hopes so; there are only so many more chances he’ll have to win a Cup title. But he’s not the only one rooting for Keselowski to graduate into the next level of stardom. NASCAR execs know this driver, still new to the Cup Series yet with a wide level of social media attachment, is the freshest face they have to offer. Danica, for all her hype, is years away from ever being successful; Austin Dillon, despite plenty of Nationwide Series promise, may not make it to the sport’s top level until 2014. Considering the top Sprint Cup rookies from the last three years are either running part-time, start-and-parking, or sweeping floors somewhere (in some cases, it’s a combination of all three), fresh talent has become increasingly scarce. The sport needs a new name, an underdog capable of rising up and challenging the established elite.

Keselowski can be that man.

“At Talladega, you don’t have a plan,” he said of his race. “You go up front and you race your butt off all day long. You either get to the front or you don’t and that’s what we did.”

Spoken like a man who drives without fear. And in this age of NASCAR conservatism, we need someone that thinks in terms of winning strategy, not sixth-place satisfaction more than ever.