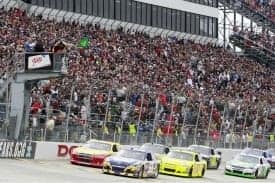 Last weekend’s running of the Aaron’s 499 at Talladega Superspeedway was, for the most part, pretty typical as Sprint Cup events on the Alabama high banks go.

Drafting in various forms gave way to passing and wrecking in various forms, yet the race did manage to exhibit some unique traits by the time the checkered flag flew. Not only did Brad Keselowski and his No. 2 Blue Deuce lead the entire final lap and win (a most uncommon occurrence at Talladega), but his victory put Dodge back in the winners’ circle after an absence of over 35 years. Not since journeyman driver Dave Marcis piloted his No. 71 K&K Insurance entry to a 29.5 second victory over the No. 15 Norris Industries Ford of Buddy Baker had the legendary marque celebrated a win at the 2.66-mile track. For all things appearing to be the same, NASCAR Nation was treated to something rather unique.

The same will be said once NASCAR’s traveling circus stops in Delaware early next month. While the June race at Dover International Speedway is most often recognized for the physical and emotional toll it takes on drivers and crews, this year’s running will be recognized for something else – a development that aligns the speedway with a practice that seems to be emerging all across the nation. This emerging trend is tied to emerging data regarding the condition known as autism, and a need for new approaches to better serve this all-too-ignored audience.

Recent statistics regarding autism are staggering. According to findings compiled by the United States’ Centers for Disease Control and Prevention, approximately one of every 88 children in America falls on the autism spectrum. This number marks a ten-fold increase over the past 40 years. Autism is more common in boys, with about one in every 54 being diagnosed as on the spectrum. In comparison, data shows that one in every 252 American girls receive a similar diagnosis.

While the specific causes of autism are not readily known (although early brain development seems to be a crucial component), it has long been believed that basic childhood immunizations might be a contributing factor (although research shows no relevant or direct relationship). According to Autism Speaks (where the afore-mentioned information was found), more than two million Americans have Autism Spectrum Disorder (ASD), with tens of millions more people affected across the globe. Even though levels of ASD severity vary greatly, the spectrum shows that roughly 40% of autistic children possess average to above-average intellectual skills, while around 25% are non-verbal but able to learn how to communicate.

Autism has emerged as a more-recognized topic in our popular culture through an eclectic collection of motion pictures such as “Rain Man” (1988), “What’s Eating Gilbert Grape” (1993), “Mozart and the Whale” (2005), “Adam” (2009), and “Dear John” (2010). A more mainstream depiction of autism (and its effect on family relationships) can be found on the NBC television series “Parenthood”, which features an eleven-year old boy (the character of Max Braverman, as played by Max Burkholder) who’s been diagnosed with Asperger’s syndrome. According to an article about the series by Emily Nussbaum in the January 2nd, 2012 issue of “The New Yorker”, the program’s creator – Jason Katims – has a son with the same, high-functioning condition. As such, the popular television series clearly depicts the struggles and triumphs of an extended family living with autism.

While this column is not intended to be a primer in the complex disorders known as autism, it IS meant to demonstrate how prevalent the condition truly is. Given my wife’s occupation – she co-teaches in an early childhood classroom – we are acutely aware of autism and its attributes. Not only does she deal every day with students who are on the spectrum, but we know people whose children are autistic. We get to see these families away from the confines of a classroom, such as in the middle of a store or in a restaurant, which gives us a different appreciation for what Dover International Speedway does each June.

Dover International Speedway has been involved with autism awareness and fund-raising for the past six years, cultivating a relationship with Autism Speaks, which is regarded as “the world’s leading autism science and advocacy organization.” As such, the stage is set once again for the second-annual running of the “FedEx 400 benefitting Autism Speaks”. A variety of events are on the docket for the weekend of June 1st through the 3rd, including an opportunity that will enable children with autism to experience big-time stock car racing in an atmosphere best suited to their individual needs. While being the first of its kind in NASCAR, a similar concept has been developed for other, very public events that tend to prove difficult for an autistic audience.

Recognizing a change in socio-cultural attitude was, for me, rather simple – albeit unusual. It came in the form of a small news item published in “The New Yorker” about seven months ago. The bulletin announced that several hit Broadway shows were going to stage “autism-friendly” performances for children. These special performances were being organized (and sponsored) by the Theatre Development Fund, an organization that seeks to make live theater accessible to all. The first such experiment was a special showing of “The Lion King” last October, which was followed less than two weeks ago by a performance of “Mary Poppins”.

Autism-friendly Broadway means changing lighting, dance numbers, and music to be softer and less jarring for children who are sensitive to such sensory conditions as light and sound. Theater decorum was “modified” so that children could move about and make noise, and autism specialists were present to help the audience prepare for sudden changes, such as applause after a song or loud noises onstage. By making the performance better suited to the needs of children with autism, the children and their caregivers were able to enjoy a beloved story through the magic of musical theater. Based on the success of these two experimental performances, more autism-friendly shows are being planned. Perhaps more importantly, theaters from around the nation are asking about how they might offer similar experiences.

Dover International Speedway has taken large steps to implement changes and accommodations for those with Autism to be able to experience a live NASCAR event.

It may not be the musical theater of Broadway, but next month’s Sprint Cup race at Dover plans to adopt similar measures in hopes of reaching a similar audience. In the words of the speedway’s official press release:

The all-inclusive event [the “FedEx 400 benefiting Autism Speaks”] marks the first-ever autism friendly NASCAR race, and gives families an opportunity to experience a NASCAR race in an environment specifically designed for the enjoyment of children with autism. Autism Speaks Day at the Races will be held in Dover’s air-conditioned grandstand, offering a great view of the Monster Mile from the backstretch, and will feature brief presentations by educational speakers in the morning, special appearances by NASCAR personalities, food and drink, and much more.

In addition, the area will offer a dedicated quiet zone, set inside special rooms within the air-conditioned grandstands, where parents can bring their kids to get away from the crowd if necessary. The quiet zone will be sensory friendly, with muted lighting in a calmer environment, while also featuring video screens to keep up with the action on the track. (published 4/23/2012)

Not only does this effort by Dover International Speedway and NASCAR (who’s playing an active role in fund-raising events that weekend through the auspices of its charitable foundation) mark a significant development in attitudes regarding audience and access, but it’s actually another step along what has become a very wide path across NASCAR Nation.

My question is, everything happens for a reason, so what does the sanctioning body hope to achieve?

It wasn’t all-that-long ago when attending a NASCAR race meant taking a walk on the very wild side. As the sport’s target audience experienced a “baby boom” of sorts, race fans became frustrated when they tried to take their children to an event. I remember being surprised by the announcement that Charlotte Motor Speedway was converting a section of its grandstands into a “family-friendly” seating area.

The idea of a grandstand being turned into a no smoking/no drinking zone seemed like the antithesis of what made NASCAR the sporting experience it so infamously was; spending Sunday afternoon among folks who had no intention of smoking, drinking, or even using profanity seemed too much like being in church – the place fans purposely avoided in favor of enjoying a day at the races. We’re coming off a weekend at Talladega, a track where the action in the infield sometimes outshines the action on the banking.

Back in the day, as they say, it wasn’t an official race weekend in Alabama until a car was set ablaze in the infield.

Now…. consider “off-track” events we’re seeing in 2012 – a year when Daytona International Speedway proclaims itself to be a smoke-free facility and NASCAR boasts openly in the national media about its dedication to recycling bottles and planting trees. More importantly, there are families in need of financial, medical, and emotional assistance. NASCAR’s own promotional materials state that:

That said – is it any wonder the NASCAR Foundation is playing a significant (and very public) role in the events benefiting Autism Speaks and the Sprint Cup race at Dover International Speedway next month?

I know competition has been tweaked dramatically over the years, but is it possible that attractions surrounding the races need to be tweaked dramatically, too? Has the rough-and-tumble NASCAR of yesterday evolved into a kinder-and-gentler NASCAR more in touch with the needs and demands of today’s fan base?

I’d say the answer to that question – quite emphatically, based on the all-inclusive event we’ll see at Dover in a few weeks – is a rousing and enthusiastic “yes!” The work being done by speedway administration and staff, in cooperation with the efforts of a respected organization like Autism Speaks, just may redefine how families affected by autism participate in professional sports. If the “first-ever autism friendly NASCAR race” experiment is successful, any major sporting event will become fair game.

Actually, NASCAR’s direct involvement makes perfect sense. While efforts to reduce greenhouse gases and reduce landfill waste sound all well and good, these initiatives do little more than pander to current popular attitudes and values. As I alluded to in my column last week, it’s difficult to earn huge annual profits through the consumption of limited natural resources and not at least try to look concerned about the environment. The whole “fiddling while Rome burns” approach won’t sell tickets to your next race. A better bet is to become affiliated with a more benevolent cause – to become associated with a charity that provides tangible benefits right now.

The NASCAR Foundation supports wonderful and necessary charities and civic causes, but maybe the sport should strive to do more in that regard. Saving the environment might have long term, “big picture” potential for success, but it’s often the smaller, more-immediate initiatives that provide concrete results – a perfect (and appropriate) goal to accomplish at Dover International Speedway.