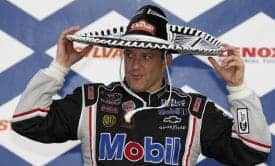 It’s been a tough week to be a NASCAR fan. Last week NASCAR’s Robin Pemberton called us “needy” for wanting to see the debris that warranted a late caution flag at Richmond. After Sunday’s Arron’s 499 at Talladega, “Tony Stewart delivered a bizarre , sarcastic rant that seemed to blame the fans for the carnage that occurred during the race.”:http://www.youtube.com/watch?v=1UjbugjIAxc

I was a bit taken aback by Stewart’s comments. If they were intended to be funny, he missed by a wide margin. Over the years I’ve learned from several failed relationships that when you start sensing a little bitterness in her sense of humor even as she laughs, it’s time to pack your bags and head for the next rodeo because it’ all over but the hurting part. If he was trying to express his frustration with NASCAR and plate racing there was no need to drag the fans into it. The majority of us are in agreement with the majority of drivers in thinking plate racing is stupid and dangerous. My guess is Stewart was concerned if he really spoke his mind he’d end up getting fined for it just as his teammate Ryan Newman did for expressing his displeasure with plate racing.

In honor of Cinco de Mayo weekend, Stewart must have slipped into his alter ego of El Antonio Loco during his post race rant at Talladega, longing for Figure 8 racing, taped off front ends, and NASCAR Thunder 2003 antics at plate tracks.

NASCAR has in fact said no penalties will be leveled against Stewart for his remarks. They’re probably too glad his bizarre rant is what people are talking about this week rather than the wholesale carnage at ‘Dega.

It’s also interesting to me that a driver who finished 24th in the last vehicle listed as running after all the smoke cleared, chose to address the media at all. Throughout his career Stewart has never been shy about expressing his disdain for the press. The top 3 finishing drivers are required by NASCAR to make themselves available to the scribes in the press box after the race. Stewart has blown off that obligation numerous times simply because he wasn’t in the mood to speak. If someone asks him a question Stewart feels is stupid he’ll let them know that in no uncertain terms and he’ll refuse to answer the question. That’s his right I suppose — but it’s not very polite.

Truthfully Stewart has often at least hinted at a certain level of disdain for fans as well. He was the driver who championed the concept of closing the garage area to race fans because he didn’t want to be bothered by them. (Well, I think he actually said he was claustrophobic and didn’t like crowds. I’m not sure how anyway with claustrophobia could stand to sit in much less drive the current generation of stock cars.)

You have to look at Stewart’s remarks in the context of the season-long debate over whether stock car racing has gotten too sterile and frankly, boring.

In my mind the season is off to one of the blandest starts I can recall, but that’s not because of a lack of wrecks prior to Sunday’s wholesale carnage. What’s been lacking has been side-by-side competition with most races quickly become single file processions of cars separated by gaps of several seconds. In last week’s column I gave my guesses on what’s causing the dearth of action and my opinion is in agreement with most of the fans who write me.

The reaction of some to complaints that the races are boring is that fans are ghouls who just want to see a bunch of wrecks. There’s some higher ups in NASCAR and in the media who feel that’s the case and apparently this misconception has spread to some of the drivers as well, most notably at least this weekend in the person of our reigning Cup champion. But I’ve heard other drivers express the same sentiment albeit it a bit more tactfully but in equally bizarre terms. Carl Edwards smiled as he said that if fans wanted more wrecks he and the other drivers were going to have to do that. Really? What are we going to pre-script the races like a pro-wrestling bout? All right, Carl, on lap 25 you run into the No. 48 and take him out. Jeff, on the restart you take out Carl for what he did to your teammate and stuff him into the first turn wall. When you get out of those cars make it look like you’re having a heated argument and are about to start throwing punches even if you’re actually discussing how your 401ks are doing. Oh, and we need someone to toss a water bottle onto the track with five laps to go.

What kind of nightmare would that be?

Well actually what sort of nightmare is the following statement, a direct quote from Stewart’s bizarre rant. “Like I said, if we don’t crash half of the field by the end of the race they really need to extend it because that is what the fans want. They want to see that excitement. I feel bad that as drivers we couldn’t do a better job of crashing enough cars for them today . I feel like that is what we are here for.”

Makes you feel all warm and fuzzy inside, doesn’t it?

It’s especially troubling to me that Stewart would make such a comment after Friday’s ARCA race and Sunday’s Nationwide race both featured savage wrecks that left fans hanging and praying wondering if they’d just seen a driver killed. There is simply no sound at a race track worse than a med-evac helicopter firing to life. There’s few sights at a race track worse than the Jaws of Life being taken out of the back of the truck. All you can do at that point is pray, hope and wait. I know that’s what I was doing Friday evening and Saturday afternoon. Yet somehow Stewart seems to have an impression I’d be standing up and cheering hoping for the worst possible outcome. If that’s the case why is attendance at Talladega, a track known for and promoted as featuring savage wrecks drawing around 50,000 less fans per event than it was a decade ago?

Did the SAFER barriers installed to reduce the likelihood of serious injury or worse send all those ghoulish fans packing?

It’s funny, but for the last ten races of last season I don’t recall a lot of fans complaining about how boring the races were. That was due in large part to Stewart himself. After a disappointing regular season, Stewart caught fire in the Chase, getting up on the wheel and running every lap he drove as hard as he possibly could. When adversity knocked him back in the running order, he’d come storming back through the field like a maniac. Once he was in the lead, he wasn’t going to give it up to anyone, and if they tried to take it from him, he wasn’t above swapping a little paint to point out their lapse in manners. If a bunch of drivers would adopt a similar strategy for all 36 races, not just the last ten, the problem of “boring” racing would be solved completely but it’s unlikely we’d ever see that style of racing during the regular season with the current Chase points format.

It’s disheartening to how out of touch NASCAR officials and now even some drivers are with what the fans really want. That dichotomy is probably what lays at the base of most of the problems that plague our sport. But on behalf of myself and a lot of fans like me to anyone who thinks we’re ghouls eagerly anticipating the next big wreck, don’t worry about what we want. We were just fixing to leave anyway.