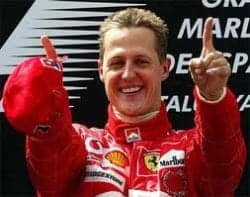 Following on from comments around last week’s piece I’ve been cajoled into that most subjective, most impossible of tasks. The top ten drivers. To simplify matters somewhat I’m going to restrict it to the limitations of “in my lifetime….that I remember.” So for the purpose of argument, we’re going to go from Gilles Villeneuve onwards. Let’s call it 1979.

Read on to see where the seven-time world champion ends up on Andy Hollis’ top 10 list.

On the matter of bias, I have always favored foot to the floor drivers like Senna over smoothies like Prost or Button so that rather influences some of my choices and positions. Forgive me on that!

*10 – Sebastian Vettel* – Number 10 was perhaps the hardest of all the numbers to allocate. I had an idea of who would form the top 9, it was just a question of what order. However, at 10 – which of Vettel, Hamilton or Button should creep in ahead? I’ve plumped for Sebastian by dint of the fact he is a double world champion, and moreover a consecutive champion. Granted the Red Bull has been much the superior piece of machinery over the past couple of years (and it’s advantage as such has actually been underestimated through engine conservation and tyre management. If the cars were flat out, 100% of the time, the Bulls would have been streaks ahead), but then, show me a champ in a slow car. Vettel has the talent to go on to break many more records – he’s fearless, quick in all conditions and for one so young makes very few mistakes. Hence he beats the others to that number 10 spot, with a keen eye on moving further up this table as the years progress.

*9 – Nelson Piquet* – I’m trying to take the human element out for the next two, as you’ll find few people in the F1 paddock who genuinely warmed to my number 9 or number 8 as individuals, but with that aside, you cannot deny a triple world champion a place in the top 10. Piquet, if nothing else, was a quick and mighty clever driver who would look for any advantage, be it fair or otherwise, to get his car across the finish line first. A master of mind-games and friend to few (other than that most powerful of allies, a certain B. Ecclestone). Put him in a 2012 car, would he be as quick as Vettel? No, probably not. But three championships in an era of some true greats of the sport can’t be sniffed at. Get in at 9 Nelson.

*8 – Nigel Mansell* – What can we say about Nigel, or Il Leone as the Italians called him. We Brits used to call him “Our Nige” and he engendered a fervent following like few others. In fact I remember going to British races in the 80’s that felt more like the experience (good and bad) of soccer matches that was generated purely by the presence of Mansell. And beer. When it came to bravery and flat-out driving in it’s most violent form, Mansell was peerless. Subtlety and politics, less so. But hey, this is about driving, and just for his raw, unadulterated breakneck pace, “Our Nige” comes in at 8 despite my personal reservations.

*7 – Gilles Villeneuve* – The man’s gone mad, I hear you scream. The bottom three slots of my top 10 are filled by drivers with a minimum of two driver’s championships apiece, and yet here at 7 we have a man with no championship to his name. Well, many people say that Stirling Moss was the greatest driver never to win a championship. In my lifetime, that unfortunate accolade would most certainly sit with Gilles Villeneuve. Had his life not been tragically cut short following a testing accident at Zolder exactly 30 years ago, then this statistic I am quite sure would be very different. Championships do not always give us a true barometer of talent, and I am sure that Gilles son, Jacques, would tell you that his father’s natural ability was greater, despite the fact it is Jacques that boasts that most desirable trophy.

The reason I put Gilles in ahead of a few multiple champions here though, was his gift for the extraordinary. People most often remember the three-wheeling, wild Gilles, but he was also capable of the most incredible sensitivity with his race car, and his tyre management was equal to his gift to wrestle the most unwieldy of machinery. Just pure talent.

*6 – Niki Lauda* – Another three-time world champion comes in at number 6 for me. I have a huge bias towards those who come from adversity back to triumph (hence my man at number 4 which I’m sure will be debated) and Lauda perhaps personifies that trait more than any other driver in history. Having been given the last rites following his crash at the Nurburgring in 1977 (yes, I know we’re meant to be going from ‘79 on, but cut me a bit of slack here okay!) Lauda returned despite horrific injuries and burns a mere six weeks later, finishing fourth in a blood-soaked balaclava at the Italian Grand Prix. After retiring at the end of the 1979 season to run his airline business, he returned to the sport in need of cash in 1982 and went on to win the third Grand Prix of his comeback, along with his third title, from team-mate Alain Prost, in 1984. Although it falls slightly outside of the original remit, the ’75, ’77 and ’84 champ comes in at 6.

*5 – Fernando Alonso* – Alonso for me is the most “complete” of the current crop of drivers (including the post-comeback version of Michael Schumacher). You don’t see the man have a bad race.. He’s exact in his precision, relentless in his pace and has that incredible ability to drive far beyond the capability of the car he is racing in. Moreover, I can’t stress enough how in the hands of ANY of the other drivers around at the moment (and yes, I include Hamilton, Vettel, et al in that statement) you would never, ever have seen that Ferrari on the top step of the podium this season. With Alonso behind the wheel though, it becomes possible, no matter how very unlikely. A double world champion to boot, give him a competitive car and that number will increase exponentially.

*4 – Mika Hakkinen* – This may be my most controversial selection at number 4, but perhaps I should let others sing the praises of the Flying Finn to explain my reasoning. If you speak to one Michael Schumacher, who knows a thing or two about Formula One, and ask him who his biggest rival was, who he respected the most, who he feared the most, he will always without hesitation tell you it was Hakkinen. Speak to team-mates such as Martin Brundle, and they will tell you that when looking at the telemetry after a practice session, there was always two drivers who could do things with the car that they couldn’t explain. Senna….and Hakkinen. Over a single lap there are few that would argue the point that he was quicker than Schumacher, and across the late 90s to 2000, he was the only man that could hold a candle to the great German driver, and often beat him.

Coupled to that, Hakkinen had returned to the sport after an horrendous crash in practice at Adelaide in 1995 – having had an emergency tracheotomy at the trackside, Hakkinen lapsed into a coma, where upon waking his first “signs” (for he couldn’t speak) were to mime a steering wheel – “when can I drive again?” The damage to his hearing amongst other neurological symptoms continues to this day, but regardless, he came back to win consecutive world championships in 1998 and 1999 (and was unfortunate not to claim the 2000 title as well, but for reliability issues). Bravery, resilience, searing pace. Hakkinen sneaks ahead of Alonso for position 4.

*3 – Alain Prost* – ‘The Professor’ is my sole concession here to the smooth, effortless style of driving. When you watched Prost, you never got the idea that he was trying awfully hard – no lurid slides, no snatched brakes and locked tyres. It just looked easy. Coupled with this, he held his own against Senna – sometimes through political maneuvering, but more often than not on the track. Never the most comfortable in the wet, he was a sublime talent, and his tally of four world titles means it would be folly not to find a place for him in my top 3. Welcome to the podium Alain, a place you know so well.

*2 – Michael Schumacher* – Never in the history of Formula One has there been a man so capable of building a winning unit around him as Michael Schumacher. A destroyer of records and holder of a quite incredible 7 world titles, like Alonso now, Schumacher was capable of metronomic precision in a race car and retained the ability to think with an absolute clarity whilst driving at 200mph. Although the Schumacher Mk II currently racing is not quite of the same caliber as his first incarnation, his talent is undeniable. Some may question the quality of the era in which he won his titles, but let’s be honest here. Anyone capable of bringing home the bacon seven times has to be up near the top. Number 2 it is.

*1 – Ayrton Senna* – Rather than writing a lengthy eulogy about Senna in this piece, my thoughts on the man can be found in last week’s column. All I will say though is that unlike every other position in this list, I never had any doubt over who would fill my top spot. He was the best and it will take an awful lot to shift him from that position in the mind of this writer.