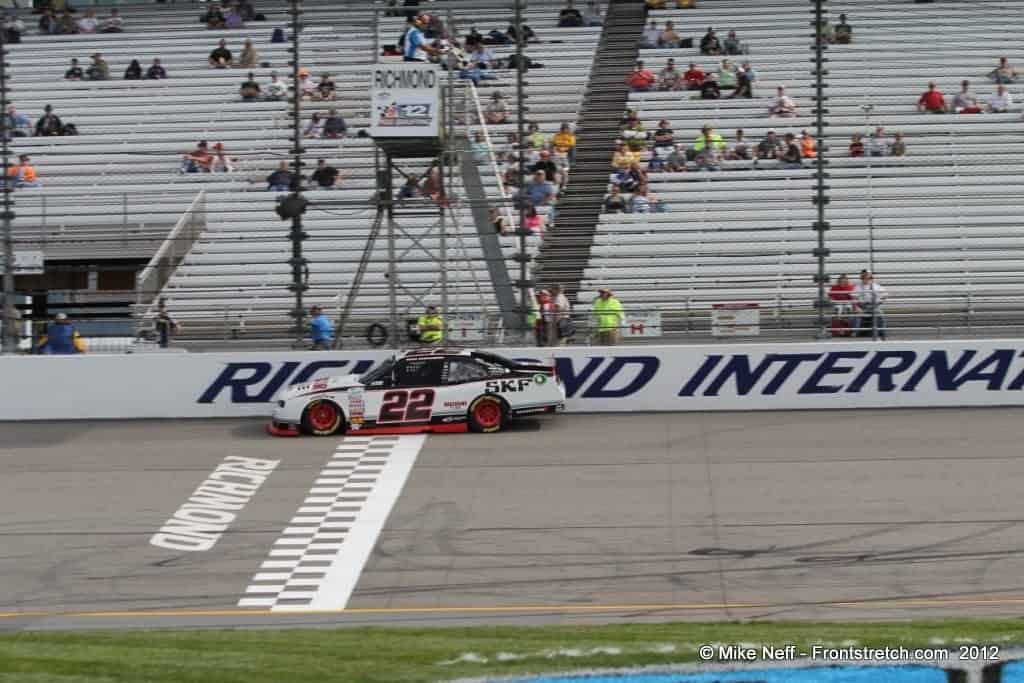 Just as was the case with Richard Childress Racing and Turner Motorsports at Richmond, NASCAR did nothing more than slap Penske Racing on the wrist after they were found to have modified front bumpers at Talladega. The crew chiefs of the Nos. 12 and 22 cars were fined and placed on probation without any points penalties or suspensions, meaning for the well-endowed operation at Penske, life will simply go on.

It’s not perfect. Penalizing race teams for getting innovative within the inspection template of today’s race cars serves no purpose but to stymie innovation and keep the competitors running at the sanctioning body’s speed…full on in the wrong direction. But in the grand scheme of things, both the monetary and probation penalties that were assessed are minimal. Innovation was curtailed, but in a “don’t do that again” way, not a “you’re grounded for two weeks” way.

Penske Racing became the latest Nationwide Series powerhouse to be caught pushing the envelope…and fortunately didn’t get hit hard for doing so.

That’s good news, especially considering that between RCR and Penske Racing being involved in these gray areas of the rule book, two of the three biggest title contenders in the Nationwide Series have taken a gamble to bring a better race car to the track, penalties be damned. That this mentality is present in a day of points racing and restrictive adherence to a heavy-handed rule book is refreshing, and just another angle to add to a points race that’s already got plenty going for it; a rematch of a 2011 bout that went to the wire, a Truck Series champion in the running to become only the third driver ever to win a title in both of NASCAR’s minor league tours, and an open-wheel convert getting a second chance at stock car racing.

Add to that mix one of the most visible elements missing from today’s NASCAR (mechanical innovation), and the Nationwide Series really may be on to something. Here’s hoping Roush Fenway Racing gets in on the gig…after all, it’s not like NASCAR can penalize everybody all at once…right?

Carl Edwards has left the Nationwide Series alone for the first three months of the season, but that absence is about to come to a close courtesy of ESPN. Now, the 2007 series champion and all-time record holder for pulling double duty between major and minor league sports simultaneously will be in the booth for the NNS events at Darlington and Kentucky.

There’s conflict of interest aplenty here. It’s bad enough there are owners and parents in the booth…now there are teammates as well? Though to be fair, with as much as ESPN’s telecasts slanted towards Elliott Sadler as the title fight with Ricky Stenhouse Jr. wound down last season, maybe having another Roush driver in the booth will just balance things out.

The larger issue though is one of oversaturation…how much Carl Edwards is too much Carl Edwards? Or any megastar for that matter? The TV ratings and attendance for Nationwide Series races have stagnated since ESPN took over as the sole broadcaster of the series…and if there’s been one pattern to their coverage over the years, it’s been beating a dead horse into the ground. Race broadcasts routinely feature 50% or less of the field. And cover stories become infomercials, be it the Kyle vs. Carl show of spring 2009 or the Danica 300 at Daytona a few years back.

It’s been this way for years, and it’s not growing the sport. Now, the next idea is to put a driver that’s already plastered all over Sunday’s races as a voice over for the minor leagues he insisted on running long after his driver development was complete. To put a driver on air that once wondered at Nashville why a driver like Kelly Bires couldn’t find a ride as he was busy driving a Cup-backed car with millions of sponsor dollars on the hood stomping the field. That a driver that was the face of Cup dominance in Nationwide racing is now going to be up top providing perspective screams retread…and more so that the network still isn’t ready to broadcast the very regulars they signed up to cover.

Looks like this writer and MRN are going to spend the evening together Friday. Feel free to join. Just bring pretzels.

It wasn’t 24 hours after the end of last weekend’s race at Talladega that NASCAR officials themselves made comment that Danica Patrick would not be penalized for punting Sam Hornish Jr. into the wall on the cool-down lap. To quote Robin Pemberton, “we’ll talk to them again at Darlington. [But] there’s not a history there. There’s not a lot of things.” And according to an ESPN report, Pemberton went as far as to note that Danica’s move was not on par with Kyle Busch dumping Ron Hornaday at Texas last fall, a move that saw Busch parked by the sanctioning body and abandoned by his sponsors for the end of 2011.

Now, heading into Darlington weekend, Danica’s quoted as saying she’s not sure whether NASCAR will penalize her. It’s too perfect…no penalties were announced on Tuesday, the vice president of competition for the sanctioning body itself all but ruled out penalties and went out of his way to differentiate her incident from a similar one that would set a difficult precedent to enforce…and yet, the starlet is now the story…again. Will she get penalized? The suspense!

Here’s the real rub, and it goes two ways. There’s nothing wrong with NASCAR calling a meeting Friday to ensure no bad blood spills over onto the Lady in Black. It’s been done before. But for crying out loud, there’s nothing to learn that determines whether or not last weekend’s offense is worthy of a penalty. Make an announcement on Tuesday, set the story straight, and move on.

And as for Danica’s sudden fear of reprisal? What a great PR piece. Now the No. 7 car will be the story all day Friday, from the buildup to her meeting with NASCAR to the 15 interviews that will ensue regardless of what happens.

It all feels choreographed. I can’t prove collusion, but I can and will suggest it.