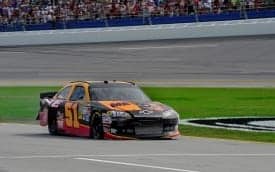 From irate policemen, abused reporters and now a ticked off pit crew, Kurt Busch is going one direction with his career: the wrong way.

This fight from this past Saturday was different. The crews fought, not the drivers. The signature video clip of one car getting drilled was not there. Chances are, Kurt Busch vs. Ryan Newman will not be the marketing campaign used to sell tickets to the 2013 Cup race at Darlington. But what this clash lacked in terms of celebrity, it more than made up for in terms of significance. Last year’s Kyle vs. Kevin clash was business as usual; two of NASCAR’s biggest hotheads acting like morons in front of millions. Nobody learned anything new: Kyle Busch was still a coward, so scared of paying for his actions that he ran through parked traffic to get away and Kevin Harvick entered another conflict hidden behind a gargantuan helmet that’d make a Victoria’s Secret model a competent boxer.

Saturday was far from a replay, and wasn’t a bout between two drivers with history and egos to match. The beef wasn’t between the drivers of the Nos. 51 and 39, but instead the No. 51 driver and the No. 39 crew. Newman’s pit mates were irate after Busch blazed through their pit stall even as crewmen and officials were still clearing their box after completing work on the No. 39 car. Tensions already high, Busch ran into the back of Newman’s parked car on pit road after the conclusion of the race, prompting numerous crewmen from the No. 39 to confront Busch’s team on pit road. Shoves were exchanged before the aggressors were finally restrained and pulled away, keeping likely Tuesday penalties to a minimum.

But NASCAR’s involvement, at this point is inconsequential. Though in terms of a scuffle, this one was tame, the damage done could well send shockwaves through a 2012 season that can only be described as vital for one Kurt Busch.

The Busch brothers both entered this season in dire need of a rebirth. Kyle finished 2011 on the sidelines, sponsors and team alike disciplining the driver after he slammed Ron Hornaday into the fence Truck racing at Texas, while Kurt was allowed to leave Penske Racing after an ugly tirade levied towards reporter Jerry Punch at Homestead.

This type of controversy isn’t new ground for either driver. It’s become a yearly thing to discuss “new Kyle Busch” until adversity comes and rears its ugly head. Kurt narrowly avoided jail after acting arrogantly in the face of one of America’s strictest law enforcement departments in Phoenix, a decision that cost him his ride at Roush Racing less than a year removed from a Cup championship. But unlike Kyle, who still has a big-time ride and his own race team, the rant at Homestead left Kurt with no options but an unsponsored mid-tier car at Phoenix Racing. He entered 2012 with three challenges: to stay relevant driving a 25th-place car, to prove that he could still bring in sponsor dollars after acting out in so virulent a manner that sponsor Shell/Pennzoil and Penske Racing both said heave-ho to a proven race winner in favor of an unproven commodity in A.J. Allmendinger… and to get the fans, media and garage alike talking about the “new Kurt Busch.”

Following this week’s latest episode at Darlington, any progress made in rehabbing his image is gone. A late-race spin relegated an otherwise strong run by Busch to a mediocre 21st — not a finish likely to draw a much-needed sponsor. The financial part of Busch’s uphill climb in 2012 is obviously not going well (funny or not, carrying a Ricky Bobby paint scheme at Talladega is not bringing home the big bucks it takes to Cup race competitively). But the biggest damage done was on pit road following the race, no matter how minor the contact between his and Newman’s cars appeared.

For one, Kurt Busch had no rational reason to hit Newman in the first place. The No. 39 crew was angry, but the No. 39 driver had nothing to do with that… or Busch’s spin. Yet, when the race came to a close, the No. 51 car ran into a parked Chevrolet on pit road! Of course, Kurt’s excuse was he didn’t see where he was going because he was taking his helmet off. Believe that one and feel free to swing by my apartment, I have a bridge to sell you.

Considering the circumstances, it’s hardly surprising that Newman was upset in post-race remarks, telling Dustin Long, “Kurt drilled me in pit lane and said that he was taking his helmet off and he didn’t see where he was going, which I’m pretty sure there were 42 other guys that are taking their helmets off and doing whatever for the last 10 years and that’s the first time that’s happened to me. Circumstances I think are that he lied and was so frustrated that he doesn’t know how to deal with his anger.”

Harsh? Sure. Justified? Absolutely. But Newman went further, into surprising territory. When asked if he was worried about Kurt as a driver, Newman remarked, “Everybody has for the last 10 years. He’s proven that. When you can’t keep a job, it’s pretty obvious.”

Ryan Newman and Kurt Busch, during happier times: pulling out a 1-2 finish in the 2008 Daytona 500 for Penske Racing.

That remark borders on the shocking, mostly because it comes from a former teammate. It’s easy to forget it wasn’t but a few years ago that Busch and Newman were both teammates at Penske Racing. In fact, it was Kurt Busch that ultimately got Penske Racing back from single-car operations to a multi-car team after a bitter feud between Newman and Rusty Wallace had built a 50-foot wall between the Nos. 2 and 12 cars. Busch and Newman were never the chums that the Rocket and Smoke are today, but there was never a hint of bad blood, at least not to the degree that Newman alluded to Saturday.

Having said that “former teammate” bit, there’s another factor to consider here: Newman and Busch are under the same umbrella banner of Hendrick Motorsports now. So do the math… Kurt Busch hit a de facto teammate. Kurt Busch used the C-team car to hit a B-team car. The unsponsored driver hanging on by a thread hit a Chase contender and a race winner for the Hendrick organization. And the driver that’s already torched bridges with flagship operations at Ford and Dodge has now gotten into an ugly and unnecessary spat with a driver directly backed by Chevrolet’s big boss… and a three-time championship driver that has Hendrick’s ear.

All of this mess, again, for no good reason. It’s irrational, inflammatory behavior that does not have a positive spin to be put on it.

It’s “old Kurt Busch” all over again. Cup champion or not, a career can only take so much of that before turning catastrophic.