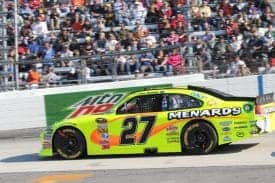 _Slugger Labbe is heading to the All-Star Race for the first time with Paul Menard this weekend and he is approaching it as a learning experience. The race is completely different from the rest of the season because the segments are short and it is all about getting to the front. It is also going to be an even more exaggerated test session because of the new technical bulletin that just came out from NASCAR that is going to make a significant change to the aerodynamics of the cars._

_In our weekly Tech Talk, Mike Neff sat down with Labbe to find out just what makes the All-Star Race different from a mechanical perspective._

Mike Neff: *We’re heading to Charlotte for the All-Star Race. You don’t get a lot of long runs in that deal. Do you get to set up your suspension a lot more aggressively because you know you aren’t going to wear your tires out?*

Slugger Labbe heads to Charlotte this week with Paul Menard and the No. 27, prepared to test new setups during Sprint Cup’s biggest exhibition race.

*Slugger Labbe:* We do, at Charlotte the All-Star Race setup you run is a lot different than what you’ll run in the 600. The track is different because there isn’t a lot of rubber on the track, so it takes a while to come in. You can be more aggressive with the setup. You have to run a tighter setup, at least we do with Paul. But it changes, of course, through the day. You practice in the heat of the day and you race at night. It is a shootout race. People generally don’t bring their best cars for that race and whatever happens, happens. You’re more aggressive on your cambers and toe, certain things we look at, more rebound in the front. However, at the end of the day you still have to handle.

Mike Neff: *Since they redid the track and did away with the Humpy Bumps, has it begun to age and are you having to worry more about travels with the shocks now that you have a few years on it?*

*Slugger Labbe:* Well, it is getting bumpy but nothing like it was for sure. Charlotte is just now getting to be a fun track where you can run all over the place again. The tires are really good and last forever. Pit strategy comes into play there a lot. I think you’ll see a lot of green flag racing which has been the norm this year, but the track is starting to come into its own and y’know they’ve thrown a few different changes into the way the format is, so you’re going to see people playing the game and trying to win the segments. Do all different kinds of things with pit strategy to get that done.

Mike Neff: *On the tires, ever since the levigation disaster they’ve pretty much had a Flintstone hard tire there. Has there been any discussion about backing off on those and bringing some softer compounds back there?*

*Slugger Labbe:* They tested at Charlotte and they did change the left side tire a little bit for when we go back, but I don’t think it is going to be anything really big. Another thing to point out about the All-Star Race is your pit stop location is going to be determined by the Pit Crew Challenge, which happens on Thursday in downtown Charlotte. It is important to do good in that event to get a good pit stall for the All-Star Race. So there a lot of things leading up to the All-Star Race that are different than what we do every week.

Mike Neff: *With the current car design there isn’t a whole lot of room to play with the body. Is there anything you can do with the body because you know there isn’t going to be much of a change during the course of a run that will get the body a little more aggressive than you would for a longer race?*

*Slugger Labbe:* The thing is, you have to understand that it is a non-points race but the penalties are still just as severe if you get caught pushing the envelope too much. And NASCAR still takes cars after the All-Star event. I don’t think you can build a cheater car or a cheater engine like you used to do in the past. NASCAR is still going to take you to the tech center. That is why a lot of people say Carl Edwards went through the grass last year and tore up his car after he won the All-Star Race, because he didn’t want people or NASCAR to see what they did to their front end. There’s a lot of theories out there, you just never know the truth.

Mike Neff: *NASCAR just put out a technical bulletin about side skirts and and I believe nose height. What exactly is in the bulletin?*

*Slugger Labbe:* There are a couple of things they’re trying to do to keep the cars on the ground when they get sideways. They’re also looking at it to take away the advantage from the leader, you see a lot where the leader will check out, so they think it will be a downforce disadvantage to the leader. It is a couple of things they’re looking at. Last week, we tested it at New Hampshire to see what the effects were of doing that. We also tried it at a Nashville test with the other two teams last week. We’ve done a lot of work preparing for it. We’ve tested on two different types of tracks.

Last night, we were in the wind tunnel making an aero map for our simulations. So it has been a lot of work, and I’m sure there are other people doing as much work or more. It is going to be a different change that is going to require different setups, and it is not going to be just as easy as we’ll just cut an inch off your side skirts and go. Aero is very important to these Car of Tomorrows, these Sprint Cup cars, and when you make a change like that it is a big effect.

It is an engineering nightmare, to be honest with you. The engineers have a lot of work to do to figure out how to get back to where we were. Eventually we’ll get there. It is a work in progress. It is what they do and what we do. They keep up with us and we keep up with them. It is a game of cat and mouse, so to speak. You’ve got to commend Darby and Pemberton for getting aggressive and preparing for 2013. At the end of the day, we have to put on good shows for the fans. If we don’t do that, we won’t have no one in the grandstands and nobody watching on TV.

So, at the end of the day they’re doing what they do and we’re doing what we do and hopefully we’ll come up with a good package that is good for the race fans.

Mike Neff: *Since you’re heading to Charlotte for the All-Star Race, is that going to be the first test with this bulletin and, if so, is there something you’re going to play with to see how it will work in the 600?*

*Slugger Labbe:* The All-Star Race has always been a science project, so to speak. The setups are different from the All-Star Race to the 600. It is different theories, different mindsets, it is 600 miles vs. 20 laps. We’ll learn some things for the All-Star Race. I can tell you we probably won’t go back with the same setup that we know runs really good there because of the new rules. It is a work in progress and I think you’ll see a lot of people running a lot of laps when we get there on Friday.

_The All-Star Race has been more of a test session over the last few years for most of the competitors who weren’t strong enough to run for the win. That is going to be truer than ever now that the new aero rules have been handed down to the teams. If someone is able to hit on something during the All-Star Weekend, it could give them a large advantage as the teams return the following week to run the longest race on the Cup schedule._