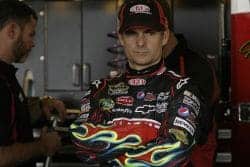 Sound funny? Sadly, it isn’t. The trend is not a new one these days, as Gordon has had cars capable of adding to his career total of 85 Sprint Cup victories but has not yet converted. He’s had bad luck, no luck, no chance… and it all seems to be happening at the same time.

Jeff Gordon has had by far the most trying season of his career this year. His woes continued at Darlington, where a pair of flat tires left him running in the back while teammate Jimmie Johnson captured the 200th win for the Hendrick team.

In fact, before Johnson’s victory on Saturday night, it had been eight months since a Hendrick car had graced Victory Lane. Hendrick says that all four of his drivers, Johnson, Gordon, Kasey Kahne and Dale Earnhardt, Jr., have had the stuff to win with but, for whatever reason – call it luck, call it karma – they hadn’t been able to close the deal for 200.

“I think in all the years I’ve ever raced, I know when I’ve had four cars, to have four cars that run as good as these cars have run every week, to have something happen…” Hendrick said. “I mean, we had oil pump issues, we’ve had cut tires, I mean, just things that were out of our control. Then cautions coming after you’ve dominated the race.

“It just looked like that, you know, we were stuck. I literally said the other day, I don’t believe we can go half a year, run that many seconds, lead that many laps… it looked like all the bad luck was coming at one time.”

The team boss made a joke about Four-Time’s awful luck this season, but there’s an underlying theme to it.

“Jeff, I wouldn’t fly home with him, you know,” he said to laughter. “But it’s just been unbelievable. I told him that out there. I said, ‘I got seats on the helicopter, but you can’t go with me.’”

The question is, when?

It won’t be anytime soon, if you believe Hendrick. He did say that Gordon needed to capitalize quickly if he was going to make the Chase for the NASCAR Sprint Cup.
Gordon is 24th in points after the Darlington race, 22 points out of the top 20. He hasn’t won yet, so he’s not in the wild-card discussion. Hendrick promised in January that all four of his cars would make the Chase… but the one who’s the biggest longshot also happens to have played the biggest part in this historical journey to 200.

“He’s got to win,” Hendrick said, shrugging off the slump. “I mean, he and Alan [crew chief Alan Gustafson] know that. As good as he runs, as good as that car has been this year at different places, we can do it. I mean, it’s an uphill battle.

“But I am confident Jeff will put everything he’s got in it and we’ll win some races with him.”

Gordon has been stout at several races this year, including Bristol and Martinsville, and he led a ton at both places. In fact, his 338 laps led is second in the Cup Series – only teammate Johnson has more. But he hasn’t been able to close the deal. He’s had that problem the past couple of seasons, and it’s not getting better.

Jeff Gordon’s crew was baffled Saturday night by two flat, left-rear tires that left him a disappointing 35th by the finish.

On Saturday night, it was a pair of left-rear tires that were mysteriously cut down. The result was a loss of 28 laps and a 35th-place finish. This track was one of the places that was circled on the calendar for Gordon, who has won at Darlington a record seven times, including a ripple of three straight Southern 500s… something that only the late Dale Earnhardt has ever accomplished.

Now, it’s being circled for the wrong reason, yet another disastrous finish outside the top 30.

“I said this a couple of weeks ago — bad luck is when you run over something that no one else can find and you cut a tire,” Gordon said. “We did that twice tonight. I don’t know. I am baffled. … All the good things that happened to us all these years to win races are biting us right now. But we know it can’t last forever.”

Oh, yes it can. Will it? That’s the better question.

Once the first tire was cut down, Gordon pitted and lost a lap. Not too long after, the same thing happened: same tire, same problem.

Gustafson sent his crew on a futile search for a culprit, pulling the car to the garage for 13 laps in an effort to find it.

Gustafson had the look of the losing coach in the Super Bowl after it was over.

“We’re trying to stay up, but it’s tough,” “he told NASCAR.com”:http://www.nascar.com/news/120513/dcaraviello-gordon-continues-bad-luck-darlington/index.html?eref=/jayski after the race. “I know, personally, I feel like I’m doing a lot of things wrong. You feel like you can’t even run a race. I don’t know. … I don’t know why or how.

“I feel bad for our sponsors and everybody that supports us and all of Jeff’s fans. It’s tough to deal with. All these guys work really hard, and we deserve a lot better than this. What’s tough, when you get into these situations, is you second-guess everything you do. And I’m trying not to do that, but it’s tough when you can’t even finish a race.”

Gordon hasn’t finished well all season. The engine blew up at Daytona. Earnhardt Jr.’s exhaust pipes cored the left rear tire at Bristol. He had pit-road miscues at California, got caught in the furball that was the finish at Martinsville. At Kansas, he lost a cylinder, and a flat tire stopped a good run at Richmond. He crashed at Talladega — along with a lot of the rest of the field. In all, the driver with more wins than anyone not named Petty and Pearson has finished on the lead lap just _three times_ in 11 starts.

That’s not a story. That’s a nightmare.

“This is not even about tonight, in my opinion,” Gordon said after Darlington. “This is an accumulation of everything that’s been going on with these performances and finishes this year. It’s almost comical. Tonight — my goodness. To run over something, possibly the same thing, and cut two left-rear tires back to back, you’re baffled by it. It’s not a fun thing, I can tell you that. We’ve had great things go our way throughout the years. Now they’re not going our way. We just keep working hard, hope it turns around.”

The walk to Victory Lane to join in the celebration of No. 200 — of which he has 85 — had to be the toughest walk this legend’s ever had to make.