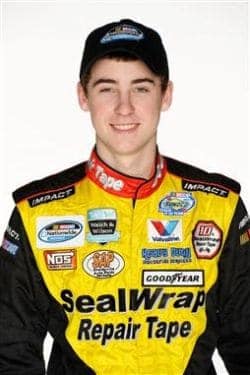 _When 18-year-old Ryan Blaney made his Nationwide Series debut at Richmond, his first start was somewhat overshadowed by the debut of Travis Pastrana as well as Danica Patrick. But by the end of that night, it was Blaney that they were paying closer attention to as he ran in the top 10 all night long, finishing a solid seventh. The son of Sprint Cup driver Dave Blaney (who is also a USCA and World of Outlaws champion) and nephew ofsprint carchampion Dale Blaney has taken his own path in racing, choosing stock cars over sprint cars. (though he’d love to drive sprints someday). The younger Blaney is running a combination of races in 2012 in late models as well as some races in the NASCAR K&N East Series and Nationwide Series–all while finishing out his senior year in high school. The rising star driver sat down with the Frontstretch’s Amy Henderson for a chat on Friday at Darlington Raceway. Although that race didn’t go as planned—Blaney was caught in a lap 2 crash and saw an early ending to the night–he used the weekend to gain valuable experience and get some great advice._

Amy Henderson, Frontstretch.com: *Last week you had your Nationwide Series debut at Richmond. Talk a little about your experience.*

Despite the lack of fanfare for his debut at Richmond International Raceway, Ryan Blaney turned heads by the time the checkered flag flew.

Ryan Blaney: It was a really smooth day for us. We unloaded pretty good and really just got better throughout the day. We qualified up towards the front where we wanted to be, and we stayed up there the whole night. It was just a really smooth day. It was a big boost for Tommy Baldwin Racing and it was great to have SealWrap on the Nationwide car for the first time and get them a good finish.

Henderson: *You kind of slid in under the radar at that race, but because of that finish you come to Darlington with more recognition. Does that add pressure?*

Henderson: *You have a total of six Nationwide races scheduled this year. Is there a possibility of adding more if you have more great finishes?*

Blaney: I hope so! That’s what we’re looking for.

Henderson: *Tell us a little about your background. You started out in Legends cars and late models–talk about that and how you got to be here.*

Blaney: I started out in a quarter-midget when I was eight. From there I went on to Bandolero cars, Legends cars and late models. I ran late models for four years. I’m still running them part time–not ours, but another guy’s late model. This year I’m doing the late models and six K&N East Series races out of our shop, and then these six nationwide races. It’s been a pretty busy year for me, and I’m just trying to keep racing.

Henderson: *Did you ever think about going into sprint cars? Your dad (Dave) and your uncle (Dale Blaney) have been really successful in those cars.*

Blaney: I’ve been wanting to get into one for a while. But I’ m really trying to focus on all this stuff I’m doing for right now. Hopefully, sometime here soon, I can get in one and go over and have some fun.

Henderson: *You’re running part time in both the K&N East and Nationwide Series. Starting out, what are your goals? As a team, what would make a successful season?*

Blaney: Finishing every race and completing all the laps. Beyond that, trying to earn a lot of respect from other drivers and teams. Hopefully, someone will notice when we run good at all our races and add on some more races for this year and keep us racing. Really, we’re looking to finish every single race in one piece. I really didn’t get off to a good start for today; the right side of the car is a little banged up on the right side, but I guess that’s Darlington.

Henderson: *You and everybody else! Which track are you looking forward to running the most this year?*

Blaney: I’m really looking forward to all the races on the Nationwide schedule. They’re all really, really, cool tracks, and all the ones we’re running the L&N races at, too. It’s going to be really fun. If I had to pick out a couple from the Nationwide schedule, it’s probably be either Indy or Charlotte. Those are two of my favorite racetracks to at least watch at.

Henderson: *You’ve been watching the Cup practices this weekend. I’m sure you watch your dad a lot, but is there anybody else that you really watched? What did you gain from watching?*

Blaney: I do watch my dad a lot. I also try to watch the guys who were up at the top of the speed boards to see what they’re doing, if they’re doing anything different from my dad or me that maybe I can learn from. So I’ve really been watching the fast guys. I looked at Harvick a lot, and Stewart was good, and Kahne. Really just tried to learn from watching those guys.

Henderson: *Is there anybody whose driving style is similar to yours?*

Blaney: Kasey’s line looked similar to mine. I could see turns 1 and 2 really good and a little bit of 3 and 4. Getting into 1 and 2, he looks pretty similar, so I’ll probably talk to him a little.

Henderson: *Who’s given you the best advice in your career, and what was it?*

Blaney: My dad gives me the best advice. He’s taught me everything I know. The best advice, and it played a big role at Richmond was about being patient. On our first pit stop, we got shuffled back a ways after running fourth, and then we were thirteenth. That kind of popped into the back of my head–be patient, you’ve got a good car and all that. And we slowly worked our way up and didn’t take any chances and that was a really big key.

Henderson: *How about your mom making you do your homework? Your sister Emma posted about that on Twitter.*

Blaney: Yeah, Monday, she was all over me about doing homework.

Henderson: *Are you a freshman in college?*

Blaney: I’m a senior in high school. I do school online, and I’m graduating pretty soon.

Blaney: We did U.S. History this year, and that was probably my favorite, just learning about how this country was made.

Henderson: *What do you like to do away from the racetrack?*

Blaney: We have a pond at our house, and I like to go fishing a lot. I do that sometimes if we get home early enough. I run iRacing a little bit and play some X-Box. I like to go four-wheeling a lot. So there are a lot of fun things I can do.

Blaney: iRacing is up there on the computer. On X-Box? You’ve got to have some of the Call of Duty games! Those are top notch. I play that a lot; I play with Chase Elliott a lot.

Henderson: *What was the biggest fish you ever caught?*

Blaney: We don’t have that big of fish in our pond. It’s like they just hatched, or something! The biggest one I’ve caught this year was only like two pound. I’ve got to start feeding them something, because they’re tiny!

Henderson: *Have you had any weird fan requests yet?*

Blaney: I just had one today where I got a marriage proposal. And someone asked me to sign a baby’s forehead one time. I was like, “are you sure?”