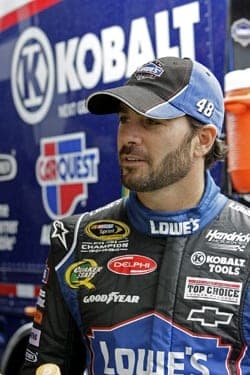 Jimmie Johnson has had a heck of a week.

First, he won No. 200 for Hendrick Motorsports at Darlington, then he flat-out dominated the NASCAR Sprint All-Star Race at Charlotte Motor Speedway.

There’s a distinct possibility that Five-Time is putting his pursuit of a new nickname to the top of the list.

That new nickname is…Six-Time. He’s already tied with Dale Earnhardt and Jeff Gordon for most victories in the All-Star/Winston with three.

Of course, the NASCAR Sprint All-Star Race isn’t for points; it’s all about the Benjamins. As in, a ton of cash, and he banked it with a dominant performance.
He was similarly good at Darlington the week before, and that means that the No. 48 team is finding its rhythm again.

That can be bad news for the rest of the field if it holds.

Jimmie Johnson and team are hitting their stride which should worry the rest of the field. The drive for the sixth championship is alive and well.

“I want to set my goals high and be considered one of the best to sit in a stock car,” Johnson said later Saturday. “The only way you do that is by winning races and piling up those stats.”

What can be more important for the No. 48 is that the chemistry that was missing during the stretch run for Title No. 6 last year has been found again.

“I’m happy to have won tonight,” Johnson said. “I can’t say enough about our team, the growth within our teammates, the confidence we have in one another, the bond that is growing between every member of the team, and all of that carries into what we do on race day and how that car performs on the track.”

The victory total should stand at three for the week, because the No. 48 team won the annual Sprint Pit Crew Challenge on Thursday night at Time-Warner Cable Arena in uptown Charlotte. That more than anything, said crew chief Chad Knaus, set the stage for the week’s sweep.

It was the pit crew, Knaus said.

“Last year we made a pretty big transition to a pretty young group of guys, guys that came from another team or two, put these guys together,” Knaus said. “I haven’t seen a group of guys that have worked so hard to have good, solid pit stops in my life. These guys are just fantastic.

“We had a meeting after we were able to win at Darlington last week, and we said, ‘Look, if we can go out and win the Pit Crew Challenge, get that No. 1 pit box, get a solid car, win the first segment, the rest would be up to Jimmie, we knew we could win the race.’ It played out perfectly.”

The crew was the weakest link in the normally bullet-proof team, but they did what they came to do on Thursday, then again on Saturday night.

“Those guys did such a fantastic job at the Pit Crew Challenge Thursday night, beat the defending champions, not only once but twice,” Knaus enthused. “I think it speaks volumes about how good those guys are.”

We know the driver is pretty good, and the crew chief too. And Johnson can get on a roll, too, as anyone who has followed the sport since 2006 knows all too well.

Is this one of those watershed moments in a season that will be pointed to in hindsight as the week it all turned around and gave the No. 48 its sixth series title?
Could be, folks, could be.

In January, team owner Rick Hendrick said that he expected all four cars to make the Chase, and for 2012 to be a dominant year for the organization.

Didn’t start that way, because it was 11 races before a Hendrick car hit Victory Lane. But Hendrick wasn’t fazed.

“I said earlier this year that I thought we had great momentum in our organization,” Hendrick said. “Jimmie has had a really good year, but we had a rough start. To see Dale win the open, then win a segment, and I thought Kasey had won a segment…all the cars are running well.

“I’m just proud of these guys. That pit crew, that young crowd, is just pumped. I think the guys are working together. It just feels terrific. After you win the 200th, that was kind of a monkey on our back for a while. To get the pit crew deal done, then coming here tonight and running this well, just excited about the 600, excited about the rest of the year.

“Everything has been clicking for us lately.”

Take the new format: within minutes after the rules were published, Knaus and Johnson figured out that by winning the first segment, you were pretty well assured to be in the thick of the race during the final 10 laps.

That’s what they did.

He hung out in the back the remaining three segments, then, when it was time to rock and roll, launched on the rest of the field after nailing his pit stop and just drove away to earn $1 million.

That’s one for the memory book, huh?

What does he want to accomplish by the time he hangs up the gloves for good?

“I have a great opportunity here with what I’ve accomplished to get up there and chase down what Gordon has done, what Earnhardt has done, Petty,” Johnson said. “I want to do that. I think it’s going to be very difficult to do. But I want to accomplish that. I’d love to tie their seven championships and I’d love to win eight. I’d love to chase Jeff down with how many wins he’s had. I’m saying I can do any of this.

“It’s obviously very difficult to do. I’ve got a lot of years left ahead of myself. I want to leave my mark in this sport when I hang up my helmet. We’re doing a great job of that.”

Judging by the way he’s been doing things the last week or so, all that is within his reach.