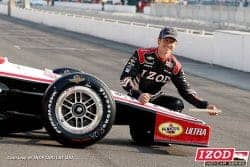 *What’s News?*
This time last year I watched the 2011 Indy 500 with my great friend Laz, a fellow petrol-head, racing enthusiast, and attendee of some seven Indy 500’s. As the laps ticked down and the leader, JR Hildenbrand, took the white flag a voice crackled over the TV broadcast, clearly the Sausalito, Ca. native’s in-car audio: “Come on baby, bring it home”.

And at that moment, with the way JR had driven, there seemed no reason why he wouldn’t negotiate the last lap with a good lead; no reason he wouldn’t bring it home for a victory for the ages. Laz and I got to our feet to applaud the clean-cut, well-spoken American rookie appropriately piloting the National Guard car, on Memorial Day Weekend. JR safely negotiated the first three corners and most of the fourth corner of the final lap before disaster struck. Instead, Dan Wheldon celebrated an improbable, and still a year on, unbelievable victory – his second at the track he so loved.

Less than five months later, the devoted husband of Susie and father of two young boys, Sebastian and Oliver, was dead in a horrible wreck at Las Vegas Motor Speedway less than 12 laps into the last race of the season. I was there that “terrible day”:https://frontstretch.com/dpeters/36001/ and it’s been absolutely atop my mind this month of May. It is a great tragedy that the defending winner cannot defend his crown, and an even greater tragedy that his sons will grow up without their father. RIP Dan.

This Sunday afternoon at the venerable Indianapolis Motor Speedway will see the 96th running of the Indy 500 and based on practice so far, it’s anyone’s race – well, apart from the Lotuses of Simona De Silvestro and Jean Alesi that are hopelessly off the pace. Ryan Briscoe starts from the pole after beating James Hinchcliffe by a final margin that equates to roughly nine inches over four laps.

Realistically, though, 31 drivers can harbor ambitions of bringing home the biggest win of all. 500 miles around a demanding track is a true challenge. I, for one, despite my sadness that Dan will not be there, can’t wait to see what unfolds.

*Track Preview:*
The Indianapolis Motor Speedway is a two-and-a-half mile flat rectangular oval track. On other weeks, this is a longer section but the home of the “Greatest Spectacle in Racing” at arguably the most famous track of them all needs no introduction.

*What’s the Points (Driver Standings):*
Will Power has a commanding 45 point lead over his teammate and friend Helio Castroneves thanks to his hat-trick of wins (Barber Motorsports Park, Long Beach and Sao Paolo) in the past three races. In the past seasons, oval racing has been Power’s Achilles heel (even with his win in the second race of the twin-bill at Texas Motor Speedway last June). The great thing for Will is that, given his somewhat checkered history at the track, there are fewer expectations.

A good points day would do very nicely but don’t rule out the gritty Aussie wheelman drinking the milk when 500 miles are all told. Sitting 57 and 59 points respectively behind Power are Andretti Autosport teammates, James Hinchcliffe and Ryan Hunter-Reay. Schmidt-Hamilton Motorsports’ Simon Pagenaud sits in fifth place, some 62 points out, and after a strong start to the year including a hard charging second place finish at Long Beach, expect plenty more from the French rookie. And finally, the champ, Dario Franchitti is in 10th place, 98 points in arrears and struggling. Now would be the perfect time for the four-time champion to start making noises about a fifth, which right now looks a remote possibility.

*What’s the Points (Engine Manufacturers):*
Simply put, it’s Chevy numero uno, Honda a little way behind and Lotus so far behind you can’t even see them. From the practice speeds so far, you’d think this would hold, but in a race of this magnitude, you never know.

*Featured Driver: Helio Castroneves.*
Three-time Champion (2001, 2002, 2009) Helio Castroneves will look to join the largest legends at Indianapolis Motor Speedway by winning a record equaling fourth Indy 500, bringing him level with the legendary names of A.J. Foyt, Al Unser and Team Penske Driver Coach Rick Mears. After a tough winless 2011 campaign, the popular Brazilian announced his return to form winning the opening race at St Petersburg. He followed that up with a third place effort at Barber and a solid fourth place run at Long Beach. After 12 years and 168 races in IndyCar, Helio is still chasing a first championship. This year might just be the chance he’s been looking for his entire career. He’ll have to get past his teammate Will Power to do it; his early season form suggests he’s up for the challenge. One way or another, Helio should be fun to watch – especially at a track he loves so much.

*Any Other News:*
For the first time in a LONG time, Jim Nabors won’t be there to sing “(Back Home Again in) Indiana.” For some this Sunday afternoon, the Indy 500 won’t be quite the same.

*Upcoming:*
June is an extremely frenetic month for the IndyCar Series with four races in a row. We start with the return to Belle Isle, Detroit (June 3) next weekend before a trip to Texas Motor Speedway the following weekend (June 10). Next up on the 16th is Iowa and finally it’s Milwaukee on the 23rd. After that stretch, the Series swings north of the border for races in Toronto (July 8) and Edmonton (July 22).