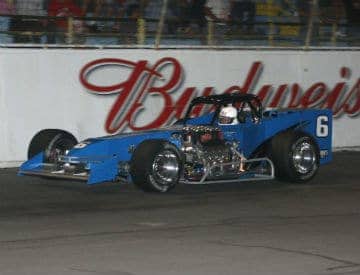 *This week from an old friend named Jack in Indiana, we got the following:*

_“I know you stay in touch with the open wheel scene, all the way from midgets up to IndyCar. What are your feelings about the new car, and would you have done anything different if you were in charge?”_

OK, Jack, you’re right. I love the open-wheelers as much as I do the stocks, and I kind of miss all of that racing that goes on around Indianapolis, as well as the people involved. Heck, I even miss my old drag racing buddies. About the new car, I don’t have any problem with its appearance, like some fans seem to have. One thing I’ve noticed in watching some of the practice sessions at Indianapolis is the effect it has on drafting.

I think we’re going to see a lot of passing in the 500 this coming Sunday.

It almost seems as if it’s going to be a lot like NASCAR at Daytona and Talladega back in the old “slingshot” days. They won’t be nose to tail before making that move, of course, but it looks like they can build up a real head of steam for a pass. The new car punches a much bigger hole in the air than the previous one did, and the bigger rear cross section enhances that. The last few laps could be pretty interesting.

All of this, of course, is in the interest of “leveling the playing field.” The days of individual initiative as it applies to car design seem to be over, and I find that pretty sad. No matter what you do, in stock cars or IndyCars, the best financed teams are going to spend every dime they can to find an advantage, and the rest are usually playing catchup. The competition may be a little closer for the first year until those big teams use their resources to figure the car out, but that’s always the way it’s been.

What would I have done? Well, you have to remember that I’m something of a throwback.

My solution would have been pretty radical. Not as radical as Brock Yates suggested a few years back, but radical nonetheless. For those who didn’t read Yates’ solution, he said that if they were going to spend so much money on designing a car, make it an in-the-box solution. He explained that you build a box with the maximum length and width you want the car to be, and if it fits in there, it’s legal. No other inspection, nada.

Personally, since they were tossing out all of the old equipment to begin with, I would have opted for running supermodifieds with American-built pushrod V8s, naturally aspirated, with no wings.

Yeah, I’m talking about those missiles they run in the northeast and out west, with the engines mounted on the side. Take a look at this photo of Kasey Kahne trying one out at Oswego, N.Y. and imagine 33 of those things at Indianapolis, or on any big oval.

Potts believes this is the style of machine that IndyCar should transition to. Wonder how Rubens Barrichello would react?

I believe the new safety technology could be adapted to those things, and they could be built by the teams themselves, much as things used to be, and it would probably be at about 20% of the cost of today’s rear-engine cars. Would it obsolete a lot of equipment? Sure, but you’re changing cars anyway, and that had to be expensive.

I’ll admit that one took me aback. However, it’s all about the money. They’ll telecast submarine races if they can get paid for it. Kind of makes you wonder what’s next; _Knitting and Crocheting_ on the Military Channel?
– – – – – – – –
I’d like to close with a comment about an old and dear friend who is leaving the business of motorsports broadcasting. I first met Bob Jenkins when he and the late Larry Nuber were doing public address work at some of the ASA races when I was flagging. The three of us became good friends, and I know Bob misses Larry as much as I do. Even when I moved away from Indianapolis, Bob and I stayed in touch.

Last weekend, Bob announced that he would be leaving the booth at the end of this month to spend all the time he can with his wife, who has been diagnosed with brain cancer.

It was very sad news to me, as I know it was to all who have enjoyed hearing Bob work various race events on TV, and remember him from the days when he worked the NASCAR events for ESPN.

Prayers from here, Bob, and we’re really going to miss you.