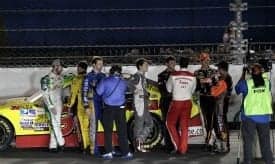 NASCAR’s recent announcement of signing an exclusive deal with Twitter should have me all….well…a-twitter, but I’m afraid I’m feeling more skeptical than anything else. While Twitter seems to be the social medium of choice among drivers, teams, crew members, and journalists, I can’t help but see the agreement as being more trivial than tremendous.

Don’t get me wrong; I have a Twitter account and post the occasional note, but that’s precisely my point: I use Twitter to post notes that typically communicate more noise than news. My most recent missive dealt with my discovery that my wedding anniversary this year falls on the same day as _Star Wars_ Night at our local Frontier League ballpark. Given that our children are huge _Star Wars_ fans, it’s almost certain that my beloved and I will celebrate our special day surrounded by Jedi and Imperial Stormtrooper wannabes.

Is such news worthy of global sharing? Not really. Did I tweet the information regardless of its relevance to complete strangers? Yes, I did. And now, 140 characters — approved by NASCAR.

The conduit connecting NASCAR to Twitter is Penske Racing’s Brad Keselowski. His tweets from the backstretch at this year’s Daytona 500 during the post-jet-dryer explosion red flag stoppage garnered not only plenty of media attention, but it netted Keselowski an almost threefold increase in Twitter followers. His first tweet from the track that night (“Fire! My view.”) included a photograph of the dryer wreck as seen from the driver’s seat of the No. 2 Miller Lite Dodge. That brief posting was re-tweeted over 5,000 times, and NASCAR’s love affair with social media suddenly went public in a huge way.

Keselowski continued to tweet information to fans all throughout the evening, even following his own accident on lap 187. From the wreckage of what was once his Blue Deuce, the Michigander wrote “’Nothing we could do there. Never saw the wreck till we were windshield deep.’” Even though he finished 32nd in “The Great American Race”, Brad Keselowski found himself all alone at number one among NASCAR drivers on Twitter.

Brad Keselowski’s Tweet Heard ‘Round The World at this year’s Daytona 500 set a new standard for athlete/fan interaction.

The problem here, in my opinion, is that embracing Twitter – regardless of whether you’re a driver or NASCAR itself – often reduces the communication being shared to a level of triviality. Just like in my previous example of tweeting about how my wedding anniversary this year coincides with _Star Wars_ Night at the ballpark, the question at the heart of Twitter should be “Is what I want to share worth sharing?” If your comment is Twitter-worthy, that’s great. If your comment is not worth the effort, then perhaps it’s not worth the tweet.

He brought race fans onto the track and behind the wheel to give them a personal perspective regarding what drivers were seeing and saying from their parking spot along the backstretch. The beauty of Twitter is that it carries the “here-and-now” of a user across the globe with the press of a key. Keselowski’s followers (and the related surge of re-tweets by NASCAR Nation’s faithful) not only communicated the events at Daytona as they happened, but the curiosity and/or interest fostered by these brief missives lured tens of thousands more into the NASCAR fold. As word spread around the speedway of Keslowski’s growing Twitter audience, the lure of exploiting the social medium seemed to grow too tempting to ignore.

How many followers could be drawn into Keselowski’s net?

According to an online article by Richard Sandomir of _The New York Times_, once it became apparent that Keslowski was attracting Twitter traffic, the goal became to snare as many followers as possible during the course of the Daytona 500. As was reported by Sandomir:

_He [Brad Keselowski] began the race with about 65,000 followers. The photo of the [jet-dryer] crash brought him 55,000 more, according to a tweet from ESPN…. As the number of new followers grew, he was asked how much higher it could go.

“Sure, let’s do it,” Keselowski responded.

But does merely accumulating a massive number of followers equate to wholesale acceptance and save NASCAR in these changing times?

NASCAR spokesman Higdon – as quoted by Richard Sandomir – stated that Brad Keselowski “distinguished himself in being the poster child for an engaging athlete – the type of athlete that the fans really connect to in a multitude of ways.”

Such behavior is not unknown in the world of NASCAR, where much of stock car racing’s popularity stemmed from the fact that fans could interact one-on-one with their favorite drivers, car owners, and crew members. From getting an autograph, to getting a photograph, to getting a hug, NASCAR has embraced its reputation for having an “open door” approach to fans. This attitude made NASCAR a national fixture during periods when other major sports suffered from alienated fans who felt unappreciated and unaccepted by the athletes and the teams they loved.

For every major league baseball player who ignored a child’s request for an autograph, there were half-a-dozen NASCAR drivers walking along pit road during qualifying with smiles on their faces and Sharpies in their hands.

Given this storied tradition of putting the fans first, does the advent of social media (and the use of Twitter, in particular) mean a fundamental shift in the relationship between NASCAR and the Nation it’s created over the past 64 years? One thing is for certain: NASCAR is celebrating Twitter and its proven track record for finding and communicating with loyal followers – sharing information (both personal and public) in real time.

According to Twitter co-founder Evan Williams, during a TED (Technology, Entertainment, and Design) presentation he gave in 2009, this was the initial intent for the system; the idea was to create what Williams called a “broadcast medium” aimed at allowing users to share moments of their lives and stay connected with others, especially when separated by long distances. This primary use for Twitter was field-tested during the San Diego wildfires back in October of 2007.

Not only did individuals use Twitter to update their family and friends about the status of the fires, but tweets were followed by reporters at The Los Angeles Times, fire and rescue teams, and emergency workers with the Red Cross. The immediate nature of Twitter allowed people “on the scene” to communicate information quickly to large audiences in real time. During 2008, Twitter users increased tenfold. The messaging service had found its place in the technology market.

For NASCAR fans, Twitter reopened doors that had been shut by the sport’s increased popularity, powerful corporate interests, and changes to race weekend schedules. If getting a pit pass proved too difficult, or if the garage area closed early on a Saturday, it was a Twitter account that allowed access to the “inner sanctum” of NASCAR.

Getting a driver’s autograph was suddenly supplemented by receiving 140-character notes from him via Smartphone, or from his crew chief, or from his wife. Personal photographs of day-to-day activities became common, as did inside jokes, pranks, and glimmers of upcoming announcements. Never before had NASCAR Nation received such quick, intimate access to their favorite teams, both on the track and in the shop. It’s a small world after all, thanks to Twitter.

But is NASCAR’s new deal with Twitter truly innovative?

If the sanctioning body is using an algorithmic approach to sorting and collecting “relevant tweets” (as has been mentioned in press releases), will acceptance by NASCAR be reduced to the presence of acceptable words or phrases? If I send a tweet, for example, containing the words “Brian” and “hate”, what are my message’s chances of being selected by NASCAR to be shared with NASCAR’s followers? The old-school “open door” policy of Twitter seems more realistic (and beneficial) to me.

Take Brad Keselowski’s test session accident at Road Atlanta last summer. Within moments of Keselowski’s wreck and rescue, a photograph of the damaged No. 2 Miller Lite Dodge was available thanks to a tweet sent by the photographer – some guy named Jimmie Johnson. Later that same day, Brad Keselowski himself tweeted a photograph of his injured (and wildly swollen) ankle. I was working on my computer at home in Northern Michigan when these photos came in – photos that I’d never see if I had to depend on a newspaper or some other such medium.

Perhaps Brad was trying to snap a fun pic to Tweet of him bump drafting Kurt Busch before he sent him spinning in the closing laps at Talladega?

The photographs and updates about Brad Keselowski were available to me before most people had even heard about the accident; most people didn’t even know that the Blue Deuce was testing at Road Atlanta that day. These tweets were sent by individuals who were able to determine their worth, their timeliness, and their value to members of NASCAR Nation; the pictures weren’t pretty, but they were certainly relevant. Leaving such decisions up to an algorithm (or to a NASCAR employee) seems problematic from a First Amendment perspective.

Given my feelings about the new arrangement, will I be a “follower” on NASCAR on Twitter? I already am. Will I trust NASCAR’s selection of “relevant” content to provide me with the information I seek? Nope, not at all.

I’ll just make sure to keep reading Brad Keselowski’s tweets, too. Any driver with 264,250 followers must have something worthwhile to share….