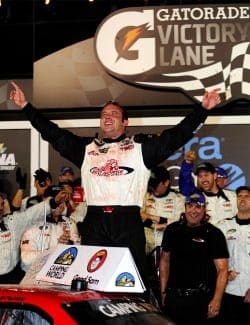 While John King shocked the NASCAR world by winning at Daytona in only his second career start, a pair of DNFs have conspired to drop hm outside of the Top 10 in points

Sunoco Rookie of the Year Contender John King shocked the NASCAR world with his surprise victory at Daytona in his 13th career start. Once the checkered flag flew, Twitter blew up with questions about the identity of the youngster who had just snagged the victory in what some would call the biggest race on the schedule. His previous best finish was a 15th, coming at his debut race at Bristol Motor Speedway in 2010.

After joining Red Horse Racing during the off-season, King came into this year optimistic for a strong showing, and after following up his victory at Daytona with a solid ninth-place showing at Martinsville, he suffered two DNFs (Rockingham and Charlotte) plus a 13th-place finish at Kansas. And while he’s dropped like a rock, he still sits just ten points outside of the top 10 and continues to gain valuable experience each and every week.

Like I said before, a trip to victory lane is no surprise when it comes to Kevin Harvick, and it’s even less shocking at a track like Martinsville. However, it was a little different for the driver who made his first start since shutting down Kevin Harvick, Inc. at the end of last season, and merging operations with RCR. Behind the wheel of the No. 2 Richard Childress Racing Chevrolet, the 36-year-old led 248 of 250 laps while keeping teammate Ty Dillon–who led the other two laps in the race–behind him much of the day. The victory was Harvick’s third at Martinsville and his fifth top 5 run in seven races.

Ironically, Martinsville is the same track Harvick was parked at back in 2002 after intentionally spinning Coy Gibbs; he was also forced to sit out the Cup Series race that weekend as well. At the same time, NASCAR president Mike Helton warned Harvick that another incident could result in an indefinite suspension, especially since he had already been on probation thanks to a then-Busch Series incident with Greg Biffle. Nothing official has been announced about any potential future starts in the Truck Series this year, but you can be sure he’ll be a threat for the victory each time he does race.

Some would argue that another name would be listed as the first ever Truck Series winner at Rockingham if it weren’t for the pit road speeding penalty Nelson Piquet, Jr.–who led all but 16 of the first 123 laps–suffered late in the race. The move took him out of contention for the victory while another Turner Motorsports driver celebrated when the checkered flag flew. For Kasey Kahne, it was just an extension of the success he’s found in his short tenure in the series. In just five starts, the 32-year-old boasts four wins and a runner-up finish.

Having captured his first Nationwide and Camping World Truck Series wins in just two months time, could a Truck title be that far off?

Coming into the 2012 season, James Buescher had been pegged to not only score his first career victory but to seriously contend for the championship. After scoring his first career Nationwide victory at Daytona in February, all eyes were on the Turner Motorsports driver to visit victory lane in the Truck Series. He led ten laps at Daytona before getting caught up in a late-race incident, which he followed up with a third at Martinsville, and a runner-up finish to teammate Kasey Kahne at Rockingham. But fresh off a break, Buescher came out swinging at Kansas. After starting sixth, he worked his way forward and led 103 laps en route to his first career victory.

While there are still questions of whether Buescher can maintain that progress and assert himself as a championship contender through the balance of the season, last year’s strong run combined with the overall increase in improvement for Turner Motorsports puts him solidly in the battle, provided he doesn’t suffer several DNFs.

“When I spoke with Justin Lofton last November at Texas Motor Speedway,”:https://frontstretch.com/blunkenheimer/36479/ he spoke of being reunited with team owner Eddie Sharp excitedly.

Justin Lofton’s win at Charlotte has his Eddie Sharp Racing team poised to revive their past ARCA success together. Yes, all of these guys make the same pose after winning.

“It was almost like a rejuvenation — we weren’t really going anywhere. Germain Racing is a great race team, the Hillmans are great people, the Germains are great people,” Lofton said last week in an interview. “But it just wasn’t working out the way we had all hoped, and I think it was dragging everyone down. And I know it was dragging me down personally, so it was really good to be back with someone that I have so much history with.”

And that history has apparently paid off in the form of the points lead following his victory last weekend at Charlotte, and with five consecutive top-5 finishes, he’s in the elite company of just two other drivers–Timothy Peters and Ty Dillon, who became the first rookie to accomplish the feat since the late Ricky Hendrick did so in 2001.

The question that still remains with Lofton is whether Eddie Sharp Racing is capable of winning a championship. Just last season, Lofton scored zero top 5s and just three top-10 finishes in 25 starts. However, the last time the driver of the No. 6 CollegeComplete.com Chevrolet was partnered with ESR, he scored six victories, 19 top 10s and the 2009 ARCA Racing Series championship. The new life breathed into Lofton’s career has certainly pushed his name to forefront of any conversation about championship contenders come November.

Along with the five different race winners this year, there have also been five different pole-sitters–Miguel Paludo, Nelson Piquet, Jr., Kevin Harvick, Tim George, Jr. and Ty Dillon. Looking forward to Dover in just over a week, I wouldn’t be surprised to see the series’ sixth winner. With so much talent across the series at this point, it’s difficult to pick a winner, however, if I had to choose one, Ron Hornaday, Jr. has a good shot of scoring his first victory of the year. In seven starts, the 53-year-old has one victory and five top 10s. Plus he’s got the added bonus of momentum in the form of his first top-5 finish of the year at Charlotte last Friday.

Regardless of who comes out on top next weekend at Dover, I certainly expect a couple more first-time winners this season, and I wouldn’t be at all surprised see 15 or more different victors in the 22 scheduled events.

*Miguel’s Corner*
_Author’s Note: Welcome to Miguel’s Corner! In a special partnership with Miguel Paludo, we’ll feature Portuguese racing phrases, an update on Oliver and more each week. Join me as we get to learn Portuguese together!_

*Oliver Update:*
We received Oliver’s type 1 diabetes diagnosis two weeks ago, and in that short period of time, he’s doing great. All his levels have remained where they’re supposed to be. The insulin pump helps a lot, because he’s taking only one insulin instead of two separate ones. At the same time, Patricia and I are getting more used to it and getting more comfortable dealing, knowing how many doses he needs and counting carbs and everything. Everything gets better, there’s still a long way to go, but for two weeks, I think we made a lot of progress.