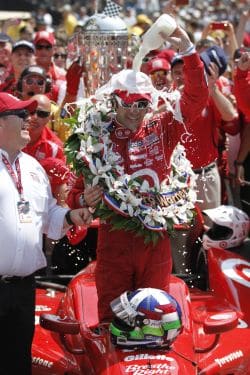 For the past several years, the eyes of the racing world have been more on a suburb of the Queen City – Concord, North Carolina – than on the epicenter of the sport in Indianapolis.

On Sunday, that might still have been the case. But based on the 1,100 miles of racing we saw during racing’s Memorial Day Weekend extravaganza, it might not be the case for long. The Indianapolis 500, always long on pageantry and tradition, lived up to its billing as the Greatest Spectacle in Racing. The Coca-Cola 600, on the other hand, was a decent race that ended with a popular winner… but not much else.

Now, understand that the two races are completely different animals. The 500, through its 90-plus-year history, has been based on being the big kahuna, the Place to Be on Memorial Day. The 600, NASCAR’s longest race, is more of a Southern tradition that begins in daylight and ends under the lights.

There was no use crying over Dario Franchitti’s spilled milk on this Sunday. Instead, fans were cheering an Indy 500 so exciting, it easily outclassed its NASCAR competition in Charlotte’s Coca-Cola 600 that night.

Both are tests of men, women and machines; both are nationally televised, and both are crown jewels in their respective disciplines.

Since the mid-1990s, when the internecine warfare among the competing open-wheel groups finally killed the golden goose that had made the 500 what it was, NASCAR and Charlotte had taken over the lead role in the Memorial Day sweepstakes. For several seasons, during the mid-2000s the Coke 600 was neck-and-neck, sometimes surpassing the 500 in the ratings.

But Sunday, the scales tipped back toward Indy. With that race, there was a plethora of emotion, because the defending champion, Dan Wheldon, was killed in the season finale last year, and because so many of the drivers in the race were like family to him. That was a sub-story throughout the event, and it was effective.
The fact that three of Wheldon’s closest friends — Dario Franchitti, Scott Dixon, and Tony Kanaan — crossed the finish line 1-2-3 helped, and the fact that eventual winner Franchitti had to pinch Takuma Sato down to the bottom on the final lap to secure the victory was a storyline in itself.

The 500, on the whole, was a much more entertaining race. The new DW12 chassis made the racing that much better, because the field didn’t string out as much. The new car punches a bigger hole in the air, making clean air a relative thing, and the cars sliced and diced through the roiled mass with ease.

Sato, for instance, restarted the race at sixth and blasted past Dixon with two to go, setting up the final-lap drama. You never knew who was going to win until the first puff of smoke from Sato’s rear tires sent him on his way to the Turn 1 SAFER barrier.

By contrast, the Coca-Cola 600 was a race of attrition that saw one driver, Greg Biffle, lead more than half the laps (204) and eventual winner Kasey Kahne lead 96. That’s over 300 of the 400 laps, split between two drivers. In all, just nine of the 43 drivers in Charlotte finished on the lead lap; in Indy, 16 of the 33 did so.

NASCAR races this year have seen an absence of two things: passing and cautions. The Coca-Cola 600 produced 31 lead changes among 11 drivers, while the Indy 500 produced 34 among 10.

For years, the constant mantra of the two Memorial Day races was how Charlotte was so much better than Indianapolis, and how the Indy 500 was a race that lived in the past while the Coca-Cola 600 was a race that was the harbinger of things to come. On Sunday, that changed.

Oh, the TV numbers might say that Charlotte won the ratings battle, and it well might have. IndyCar is still getting over the CART/IRL split and just lost its most marketable driver, Danica Patrick, to NASCAR. Watching both, however, you got the sense that Indy had more energy, more pop, and better racing than its counterpart in Charlotte.

The first 133 laps at Charlotte passed without a break, as in no cautions. The first 20 laps of the Indianapolis 500 looked like the green-white-checkered at Martinsville.
That is not a value judgment on the two races. As stated above, they are different animals. One is an open-wheel competition; the other a stock car race. They have different strategies and play to different crowds. NASCAR is a weekend; the Indy 500 is a Sunday in May.

Which is better? Who knows? Race fans vote with their wallets… and their rear ends. The winner, at least the past 10-15 years, has been NASCAR.

On Sunday, however, there were more rear ends in Indy than there were in Charlotte — considerably more. How many of them were parked in front of the TV remains to be seen, but it is worth a finner to bet on Back Home Again instead of Down Home Again.

Is this a resurgence of the open-wheel brand on American motorsports? Perhaps. Is it an indictment of NASCAR’s way of doing things that will see IndyCar come out on top? Not yet it isn’t, and it may never be.

On this Sunday, however, the nod goes to the Indianapolis 500 over the Coca-Cola 600, based on a straight-up test over 1,100 miles. It was a better race, a better finish, and a better overall product.

Next week, a month from now, and at the end of the season, that might not be the case. Both have relatively new cars. IndyCar had a brand-new chassis making its debut on a high-speed oval, and it was a success, by most accounts. NASCAR’s car will change next season, and maybe some of the aero afflictions the current car has will be less pronounced.

This conclusion is by no means saying that the Coca-Cola 600 was not a good event. There was drama, there was competition, there was good racing. But on this particular Sunday, one snapshot in a season full of them, Indy’s traditional pomp carried the day.