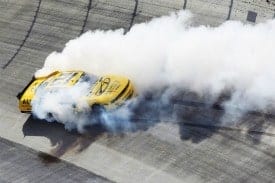 Wrecks like these have been few and far between in NASCAR, reducing the number of cautions while raising the question of “mystery debris” which some say has been used to bunch up the field the past few weeks.

*NASCAR Sprint Cup Series: Is NASCAR Reverting to Manipulating Races?* A dozen starts into 2012, there is something missing from Sprint Cup competition, at least according to some fans: the yellow flag. The dearth of cautions has been so glaringly apparent that it’s been the talk of the town on Twitter and in the media. When Kyle Busch was asked on Sunday about this trend, he said that the drivers are learning their limits within the new points system instituted last year, and many learned that overdriving the car to the point of a wreck or a blown engine simply costs too much in points for them to risk it unnecessarily early in a race. Danny Hamlin added that while drivers used to have a mulligan or two leading up to the Chase, even one in it, that’s not the case anymore.

In the end, whether Busch and Hamlin’s theories are 100% the culprit, both drivers are correct in their assessment. And, sadly, there is nothing NASCAR can do about it.

Or is there? After being notably absent for the first weeks of the season, the debris caution is creeping its way back onto the landscape in the Cup Series. All too often the debris, if there really is any, isn’t being shown by the television cameras. When asked, FOX officials responded by saying that fans were “too needy” and that it wasn’t necessary, leading to further speculation about the existence of the debris. When Jeff Gordon blew a tire at Darlington, the caution flew, though no debris was visible from the press box. Safety workers scoured the area for several minutes before picking something up (possibly a tire marble). Whatever it was, it wasn’t anywhere near where Gordon had limped around the track to pit road.

The next few weeks will be telling. Will the mysterious debris cautions continue, despite the sentiment that they are an unnecessary manipulation of the races, or will NASCAR go back to letting events play out, whether that means extended green-flag competition or multi-car wrecks? The answer will tell us a lot about the state and direction of the sport. _–Amy Henderson_

Dario Franchitti’s exciting win at the Indy 500 has more than a few people paying homage to not just the house of bricks, but all ovals involved in open-wheel competition. Could we see an increase on the schedule for 2013?

*IZOD IndyCar Series: Where Have All the Ovals Gone?* The number one complaint among IndyCar fans lately is the lopsided nature of the schedule, with only five oval tracks and 11 road or street courses making up the slate of 16 events. That complaint gained some momentum Sunday, in the wake of the most lead changes in Indy 500 history – a race which gives the series its maximum exposure and popularity.

So could more ovals be on the way? Series officials had previously expressed a desire to keep it more of a 60/40 split. The intention was to differentiate IndyCar from NASCAR and Formula 1 by claiming the most versatile racecars in the world thanks to the oval, road, and street course schedule.

“We were pretty fair on that in 2011,” said IZOD IndyCar Series CEO Randy Bernard this week. “But we saw some events that weren’t very good, quite honestly.” Bernard said series executives decided that the most important thing for the series right now was drawing good crowds to generate the interest of sponsors and series partners. As a result, it would be necessary to back off the 60/40 approach for the time being in order to focus on building great events.

Bernard hopes the lopsided schedule will balance out in time. He said the big picture emphasis of the series remains having the most versatile racecars and drivers in the world. But will the popularity of an exciting Indy change top decisionmakers’ tune for the future? The upcoming weeks and months will be telling as the series plans its 2013 schedule. _–Toni Montgomery_

*Formula 1: Silly Season Underway* Following the Monaco Grand Prix, it’s time to look out for who goes where in 2013. Known in the paddock as “Silly Season,” the driver moves for next year mainly center around Lewis Hamilton, Mark Webber, and Felipe Massa. Hamilton’s long-term contract with McLaren is in its final year, although the smart money would be on him re-signing on a $35 million annual contract with the team. But intriguingly, should the underperforming Massa be replaced at Ferrari by Mark Webber, that frees up a place with the championship-winning Red Bull team. So Hamilton’s future is far from carved in stone.

Hamilton’s relationship with the McLaren team has felt strained at points. Certainly, he endured a tough ride in 2011, and a series of pit stop errors by the team this season has continued to test his patience whilst costing him serious spots in the standings. As a result, his management firm from XIX Entertainment have been instructed to “explore other options”. It’s a decision that will run for a little time, perhaps, but certainly we’ll be keeping our ears open as the rumours begin to build pace. _-Andy Hollins_

*NASCAR Nationwide Series: Is a Storm Brewing in NASCAR’s Second Series?* Thanks to some fine pit road reporting from Frontstretch writers Tom Bowles and Mike Neff, perhaps the most significant element of the weekend’s impact on the 2012 title chase was brought to light: that between third-place driver Austin Dillon, points leader Ricky Stenhouse Jr., and the owner of the second and third-place cars in the points, Richard Childress, bad blood is afoot.

Stenhouse, despite losing 22 laps in the garage with a failure in the drive train, returned to the race track with the same speed that had him contending for the win in Saturday’s 300-miler before his mechanical demons surfaced. And with that speed, Stenhouse took care to make life difficult for Dillon, racing him aggressively but clean for an extended period that brought about the ire of both driver and owner over the radio (check out Tom Bowles’ “article from Sunday”:https://frontstretch.com/tbowles/39489/ to see the actual comments).

Why does it matter? For one, racing is racing. 22 seconds back, or 22 laps back, there is no obligation for any driver to yield space or positions to another. Stenhouse had speed, so he raced his competition as hard as he could. If Dillon had an issue with it, he should have made the pass.

In the bigger picture, Stenhouse may well emerge the loser from this exchange because owner Childress got involved. Actively defending their 2011 title, the No. 6 team has really only two major threats on the radar screen right now… and both of them are fielded by the same owner that took objection to the way Stenhouse raced his grandson. If this rivalry festers, it could explode into a much bigger matter as the season goes on._–Bryan Davis Keith_

Burt Myers, shown here after one of his many Modified victories has partnered with the North Carolina Highway Patrol and Tony Stewart to promote driver safety.

*Short Tracks: Local Driver’s Message Could Have Big Impact* Even racecar drivers have limits when it comes to being safe on the road. In the media center before the Coca-Cola 600, the North Carolina Highway Patrol and Burt Myers announced a program, in conjunction with Tony Stewart to promote driver safety, specifically attempting to put a stop to texting and driving. Myers is the defending North Carolina Whelen All-American State Champion. He’s famous for his participation in _Madhouse,_ the television series which formerly aired on History Channel. He’s one of the most well-known drivers at Bowman-Gray Stadium. Myers’ sponsor, Citrusafe, is backing this program to reduce the number of injuries and deaths that occur from texting and driving.

52% of U.S. Drivers between the ages of 18 and 29 reported texting or emailing while driving at least once in the last 30 days. In 2009, 5,474 people were killed in crashes involving driver distraction, and an estimated 448,000 were injured. Myers, Stewart, and the NC Highway Patrol hope to have people pledge to not text while driving and, ultimately, reduce or eliminate the occurrence of people being harmed by distracted drivers. Visit “notextingjustdriving.org”:http://www.notextingjustdriving.org to learn about the program and make your own pledge to not text and drive. Hopefully everyone, not just race fans, will see a drop in the number of accidents caused by texting and driving in the coming months due to campaigns like this one. _-Mike Neff_