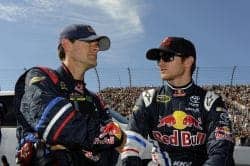 _The Cup Series is heading to Dover International Speedway, where Kasey Kahne looked to be headed to his very first Cup win in 2004 before hitting oil and crashing from the lead with 19 laps to go. That race took place two seasons before Kenny Francis climbed on top of the pit box full-time for Kahne. Since assuming that spot, Francis has led his promising driver to all but one of his 13 Cup victories. This week, in our Tech Talk Sprint Cup’s latest winning crew chief explains the approach to the one-mile concrete racing surface: timing tire wear in practice, G-forces that aren’t as different as you might think, and minor tweaks to shock absorbers._

Mike Neff: *We’re heading to Dover, which is a concrete race track. When you’re setting up a car, are there differences you have to take into account, whether it is temperature variances, lack thereof, or just the general surface?*

Kenny Francis: There aren’t a lot of specific changes you make in general. A lot of it depends on the tire they bring. Sometimes, you have to watch out for having too much camber in the right front tire because you can wear the shoulder out too quickly. That is probably the main thing you have to watch for. As far as any specific ‘This is what you do on concrete vs. asphalt,’ there isn’t any kind of laundry list that I have, it is all kind of the same basic stuff. Dover actually reminds me a lot of Darlington, as far as how you set the car up — our Dover setup is very similar to our Darlington setup.

Mike Neff: *Concrete tends to be a little rougher than asphalt. Do you have to adjust your shock rebound to account for that?*

Kenny Francis: Concrete can be rougher but they smoothed Dover out from what it used to be years ago. When the Indy cars ran there, they ground it and took a lot of the bumps out of it. They’ve still got the expansion joints, but they aren’t too bad really. I wouldn’t say we run a lot different shock package there. We try to keep our shock packages pretty basic. I look at it more big picture. Does it have more or less low speed rebound, more or less mid speed rebound, more or less high speed rebound. There, we tend to run more of a combination that allows us to run a little less control and let the tires move on their own a little bit more.

Mike Neff: *Dover has a ton of G-forces because of the way you drop down into the corner. Is that something you take into account and is there anything you do in the driver compartment to try and lessen that impact?*

Kenny Francis: It’s not a lot different from the other high-banked tracks. The vertical G component of it has a hole right there when you land that is probably 2.4 vertical and about 2.2 lateral. Somewhere in that range — although I don’t remember right off of the top of my head exactly what it is. It is in the neighborhood of what you see at Charlotte and Darlington. Dover looks intimidating, but it really is only about 24 degrees of banking. The biggest thing that increases the vertical G there is the fact that it is more of a bowl. The corners are a tighter radius so, with the same amount of banking, with a little more curvature around, so that induces a little more vertical load which translates into a little more lateral load. It isn’t a whole lot though, maybe a couple of tenths of a G.

Mike Neff: *Tire wear at Dover tends to be pretty extensive when you first get there before the rubber gets on the track. Is that something you build into the car to anticipate at the beginning of the race versus later in the race, and how can you anticipate the tire wear with setup?*

Kenny Francis: Usually, in practice it takes a while to get the track rubbered in, but when all the cars get out there in the race, it usually comes in pretty quickly. In practice, there are maybe 20 cars on the track at the start of practice and you only run four or five laps. If you really count the number of laps going around the corners, with the number of cars when you get in the race, 43 cars run ten laps and that lays a lot of rubber down. So you just have to be cognizant of what is going on at the beginning of practice and don’t put a whole lot of faith in your adjustments that you make at the beginning of practice because, when the track rubbers in, the handling characteristics will change. It usually gets slicker, you might get tighter and you might get looser depending on how your car is, but it won’t be the same, so you kind of just go out and do some basic stuff to get the track more in representative conditions before you really start basing your decisions on anything.

Mike Neff: *With it being a one-mile concrete track that, like you said will slicken up as the day wears on, are there settings in the EFI system that can ease tire spin or is that still in the hands, or feet, of the driver?*

Kenny Francis: No, that is still up to the driver. There isn’t much you can do. They’ve got the EFI system controlled so you’re adjusting your mixture and your timing map based on throttle position and RPM. The problem is that if you were to try and detune it for a specific spot on the track, it is probably going to hurt you where you need it. It is hard to separate out specific spots on the track, and that is by design. They don’t want us doing that, they want that in the drivers’ hands. If you try and do something like that, there isn’t enough fine-tuning ability or logic in the system to make that really work right. For us, it really isn’t something we’d work on at all.

_Francis and Kahne head to Dover after scoring their first win for Hendrick Motorsports in the Coca-Cola 600 this past weekend. The entire organization seems to be on an upswing since getting the 800-pound gorilla of the 200th win off of their back. Kahne, while nearly winning that first race at Dover, has not done very well on the Monster Mile in his career. Last season, he notched a fourth-place finish in the second Dover race which was his first top 5 at the track. Looking to add a second win to his 2012 resume, which will go a long way toward ensuring his team makes the postseason Chase for the Cup, Kahne will be hitting the track hoping Francis makes all of the right adjustments to his ride._