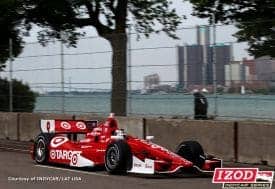 *In A Nutshell:* In a race that was eerily reminiscent of the 2010 Daytona 500, track surface issues were the big story on a day in which Scott Dixon otherwise dominated. The asphalt surface in Turn 7 started kicking up and creating issues around lap 30, and by lap 39, the track was in such poor shape that James Hinchcliffe wrecked going through the damaged area. The race was promptly stopped for 2 hours after this incident. Dixon resumed his dominance and cruised home to an easy 1.9 second victory after the race was restarted. Dixon’s teammate Dario Franchitti came home 2nd to deliver a 1-2 finish for Target Chip Ganassi Racing. Simon Pagenaud, Will Power, and Oriol Servia rounded out the top 5.

*Key Moment:* The track surface in turn 7 was slowly degrading throughout the race, and on Lap 39, James Hinchcliffe hit a piece of asphalt in the turn and crashed into the wall. This led to a Daytona-esque 2 hour red flag in which IndyCar officials were tasked to repair the track. They eventually managed to repair the track, but only enough to allow for an abbreviated finish to the race in which the race distance was cut from 90 laps to 60 laps. Dixon powered away on the subsequent restarts and never looked back, delivering a second straight victory for Target Chip Ganassi Racing in 2012.

– The track surface issues undermined what was a truly dominant performance by Scott Dixon. His ability to pull away on the races start, along with the late race restarts, allowed him to seal up a convincing win.

– Lap 39 was the big moment in the race. Not only did Hinchcliffe wreck in Turn 7 due to the asphalt, Takuma Sato wrecked at the same time in Turn 12, albeit due to a loss of car control.

– The first restart after the red flag was a complete and utter mess. Just as the race was about to restart, rain began falling on the back portion of the circuit. This led to an extremely hairy restart in which Helio Castroneves and Ed Carpenter spun and wrecked…due to rain on the track. Needless to say, IndyCar should’ve known better than to restart the race in wet conditions when no drivers had rain tires on. This issue was especially troubling considering the fact that track surface issues were the whole cause of the 2 hour red flag.

*Notable Driver: Simon Pagenuad* is the real deal. Seriously. The Frenchman delivered yet again in the Streets of Belle Isle, running in the top 3 all race long and finishing on the podium with a strong 3rd place. Pagenaud has done a little bit of everything in the world of road racing, and he has been a success in just about everything he has entered. Thus, it is no surprise that Pagenaud is seeing consistent success in IndyCar this year. Driving for Sam Schmidt Motorsports, Pagenaud has brought home 2 podium finishes and sits solidly in 6th place in the point standings. One has to wonder what Pagenaud could do if he was running Penske or Ganassi equipment. Of course, if Pagenaud can continue to deliver at his current rate, Chip or Roger might just give the 28 year old a call.

*Key Storylines:*
– As stated earlier, Scott Dixon’s win probably won’t be as heralded as it should be, simply because of all the track surface problems. However, it needs to be said that Dixon was truly dominant on this day, so much so that the rest of the garage should take notice, specifically those in the Penske camp. Dixon led all 60 laps, and no car came close to mounting any sort of meaningful challenge against the New Zealand standout.

– IndyCar really screwed the pooch on the post red-flag restart. Having the race restarted just as rain was beginning to fall was far too reminiscent of last year’s New Hampshire debacle which resulted in Will Power famously flipping off race control. Simply put, it was a dangerously risky decision and was directly responsible for the Castroneves/Carpenter incident. Needless to say, you are going to hear a lot more about the quality of officiating in the sport this week after this display.

– Target Chip Ganassi Racing is heating up at exactly the right time. With a second straight 1-2 finish for their team, both Dixon and Franchitti are in position to put up a strong fight for the championship against Penske’s fleet of drivers, and if TCGR can perform this well on the next stretch of road/street circuits later in the schedule, they might just rip the title out from underneath the early season favorites at Team Penske.

“We had to go off strategy a bit. I tried to get Dixie on the last restart, but he was in a class by himself this weekend. That was a pretty impressive performance, and he deserves it.”- Quote from Dario Franchitti after the race.

“Good race for us. A part from being hit left and right on the last restart we survive.” – Tweet from Tony Kanaan ((at)TonyKanaan)

“Hate to hear about the issues at (at)detroitgp. But on the good side I will be home to watch finish.” – Tweet from NASCAR driver David Ragan ((at)david_ragan)

*What’s Next:* The Firestone 550 at Texas is the next race on the schedule. This race has the potential to be one of the best ever at the facility, seeing as how the DW12 proved to provide great oval racing at Indianapolis. With drivers able to draft and slingshot with ease under the current IndyCar oval package, expect to see lots of fireworks and plenty of hairy moments. With Texas being the first 1.5 miler since the tragic 2011 race at Las Vegas, safety will be on everyone’s mind throughout the race. Nonetheless, this race is always exciting, and you can be sure you will not want to miss it. Coverage kicks off for the Firestone 550 on June 9th at 8 PM, and you can catch the race on either the NBC Sports Network or Sirius/XM channel 94.