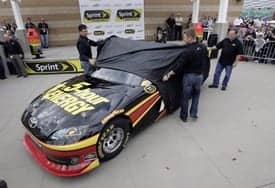 _Brian Pattie is the crew chief for Clint Bowyer now that he is at Michael Waltrip Racing. Pattie was previously Juan Pablo Montoya’s head wrench at Earnhardt Ganassi Racing with Felix Sabates, logging one career Cup Series win, 19 top 5s and 47 top 10s in 150 races. As the Sprint Cup Series heads to Pocono for the first race on the newly-paved, three-turn oval, Pattie feels that the setup will be less challenging than it has been in the past and track position is going to be at an even higher premium. It is a benefit that the teams can pit without going a lap down, too, so the window for adjustments may be bigger than it is at other tracks. Pattie talked about the changes new asphalt throws at the teams, what that’s done to the vaunted Tunnel Turn and more in this week’s edition of Tech Talk._

Mike Neff: *We’re going to Pocono and they just repaved the track. Do you feel that there will still have to be compromise in order to get the car through all three corners or will the increased grip from the new asphalt make that less of a concern?*

Brian Pattie teamed up with Clint Bowyer at MWR’s No. 15 this year, putting the driver solidly inside the top 10 in points by the season’s halfway mark.

Brian Pattie: Looking at the testing notes, it will be less of a concern. The track is so smooth that it appears they’ll be using less brake and the speeds are really, really high. Unfortunately, I think it took the character out of Pocono. Taking the bumps out of Turn One and whatnot. It is still going to be an attrition race. With the speeds we’re going to see, it will be similar to Kansas but hopefully we won’t have the same result.

Mike Neff: *Is the tunnel turn still going to be one of the trickiest corners in the sport?*

Brian Pattie: I don’t think so. They made it smooth and talking to a couple of the guys who tested there, the tunnel turn is actually the easiest now. You lift, you point and you’re back in the gas, it’s like it is easy. The repaving kind of kills the character of some of these tracks, but I understand that they had to do it.

Mike Neff: *Cautions; when you get to these repaved tracks, we’ve already seen fewer cautions this year than we have in the past but they seem to happen even more infrequently at these repaved tracks. Is that something that you have to figure in, at the beginning of the weekend, to plan for the length of the runs?*

Brian Pattie: Yes, we study a bunch of stuff. Obviously a lot of our caution analysis goes out the window with a new pave, but tire strategies, tire wear, all of that stuff we’ll start paying attention to when we show up on Friday. It all factors in, gas mileage, with the EFI system we can do multiple fuel maps. We can lean them out or run them full rich, whatever you want to do. You can kind of figure strategy before Sunday morning. [Pocono] is [also] a place you can pit, as long as you are x amount of seconds behind the leader, you can pit and not go a lap down which is a fortunate thing.

Mike Neff: *Is track position going to be as important or even more important because of the grip with the new pave?*

Brian Pattie: I’d say it is probably going to be even more important. The faster you go, the more aero critical these cars are, unfortunately. I think that is what you’ll see. I don’t know for sure but, given the fact that Phoenix was that way last year, it seems like the same trends will apply.

Mike Neff: *We have a short turnaround between the races at Pocono, the six or seven weeks that it is. Do you come back with the same setup basically or, because the second race is in the hotter months, is it a completely different deal?*

Brian Pattie: Typically, we’d unload for the second race, especially if you ran good in the first one, you’d unload with the same setup for the second one. There are some really smart people in this garage, and they take really good notes. Usually people benefit from the notes from the first race and go back, and the guys that maybe missed it will be up front and vice versa, but there is a small percentage of drivers, in this garage, that run good every time they show up and I don’t think that is going to change.

_Pattie has been having a successful season to date with Bowyer, logging two top 5s, six top 10s and only three finishes lower than 13th. Pattie has guided drivers to four top-10 finishes in eight starts at Pocono as well as winning one pole position. This weekend will test his abilities as the cars hit the track for the first time since the repave and, if he can make the right calls, he’ll get another quality finish for his driver._

Previous Kurt Busch Receives 10-Day Suspension for Verbal Tirade While on Probation
Next Couch Potato Tuesday: The End of the Season for FOX