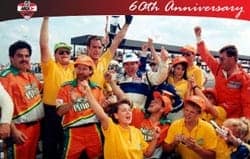 This race was pretty much over before it started…though that start came a lot later than anticipated. Two delays during Sprint Cup qualifying for a dirty race track and a crash during the pace laps delayed the start of the Pocono 200 repeatedly, but once it was green it was all Brennan Poole. Fresh off a dominating win at the Elko Speedway a week prior and having won the pole on Friday, Poole took off early and was never challenged, scoring his third career ARCA win and second of 2012. Chad Hackenbracht, Alex Bowman, Matt Lofton and Chris Buescher rounded out the top 5.

Though rain was on the mind of pit road around the halfway point, the precipitation held off and the sun was back out by lap 60, allowing the race to go the distance (Tim George Jr. won this race in a fog-shortened event a year ago). Long stretches of green flag racing allowed the field to string out, with only one interruption for three-car wreck involving longtime veteran Bobby Gerhart, who was injured in an ugly crash at this same track back in 2007.

For Venturini Motorsports, it marked the first visit to victory lane at Pocono since collaborating with Joey Logano and Joe Gibbs Racing back in 2009…but more importantly, it solidified the No. 25 team as the team to beat for the 2012 ARCA crown. With Tom Hessert III finishing a quiet 11th, Poole unofficially extended his points lead to 55 over Buescher (Hessert fell to fourth behind Buescher and Hackenbracht) heading into Michigan on Friday, a track where the No. 25 team has averaged a 1.5 finish the past two seasons.

Longtime ARCA competitor Bill Venturini saw his family-owned team score the W on a Saturday that he was also the grand marshal at Pocono.

This one’s been a long time coming for *Venturini Motorsports and the No. 25 team*. Spring race of 2010, Mikey Kile won the pole for this race, led 67 laps…and finished second. The team followed that up by qualifying second, leading 12 laps and finishing top 10; winning the pole, leading 23 laps and finishing top 5 (with Brennan Poole driving); winning the pole, leading 16 laps, finishing top 10. This time, the outcome was never in doubt. *Brennan Poole* followed up leading 148 of 200 laps at Elko by storming to a huge lead early and relinquishing it during a cycle of pit stops. This was the most dominating performance the ARCA Racing Series has seen in 2012, and one that demonstrated just how much momentum is building behind Venturini’s flagship team. With another horsepower driven track in Michigan next up, three-for-three is not out of the question.

*Chad Hackenbracht* and the No. 58 team still have yet to find the sponsor they’ve been searching for all season long, but they came awfully close to scoring their second win of 2012 nonetheless. Though there was only one stretch of the race’s middle green flag run where the No. 58 car was actually catching Poole’s No. 25, Hackenbracht was able to hold off a strong late race charge from Alex Bowman to keep the runner-up position in the final running order. The team will race next at Michigan, but are not confirmed for the upcoming short-track event at Winchester, which has the driver visibly distraught; Hackenbracht was among the class of the field earlier this year in nearly winning the first short-track race of the season at Salem back in April.

After winning in his first two career ARCA starts at Madison and Kansas last season, expectations were high for *Alex Bowman* heading into 2012. And while that has translated into a series leading three ARCA poles in the first seven races, the same consistency has not been there. That changed on Saturday. Despite qualifying a disappointing seventh after having won back-to-back pole awards, Bowman got to the top 5 and stayed there, hounding second-place Chad Hackenbracht in the closing laps and nearly taking that position. The third-place finish was his best since winning at Salem in April.

*Matt Lofton* and team had a lot to be thankful for in finishing fourth in this one; the driver had been told after the competition caution on lap 15 that his tires were showing signs of delamination (read: splitting in half) on the first run. To finish fourth with tire management on the brain was a job well done for the Coulter Motorsports development prospect.

Longtime ARCA driver *AJ Henriksen* took advantage of driving a Venturini machine, finishing eighth for his first top 10 finish since Michigan in the spring of 2008.

The one other Venturini car in the field that seemed to have the horses to keep up with Poole’s No. 25 was the other one to start on the front row, the No. 55 of *Kevin Swindell*. Starting on the outside line and forced to the high side as a result, Swindell fell victim to a narrow racing groove and was back in fourth by the time the field cleared turn 2 on the first lap. Adding insult to injury, it wasn’t 15 laps in before Swindell was forced to pit road under green for a flat left front tire. Garnering the lucky dog, Swindell stormed back through the field all the way to fourth…only to have another flat left front. And then a third. By day’s end, Swindell was four laps off the pace in the 19th position, the worst of the five cars Venturini Motorsports fielded Saturday.

*Brandon Davis* got to play the teammate role to Chris Buescher this weekend and had a No. 99 Ford that was every bit as strong as that of his teammate’s, a car that was fully capable of scoring a top 5 finish and was running there. Mechanical woes struck late though, forcing the No. 99 to the pits for a lengthy repair session that cost them five laps (radio traffic suggested something was wrong with throttle control in the car). Davis finished 21st, nowhere near representative of the showing he gave.

Lap 22 saw the biggest wreck of the afternoon, triggered after *Michael Leavine* collided with *Bobby Gerhart* entering turn 1, causing crushing damage to both machines while collecting *George Cushman* as well. None of the three returned to the race, finishing 26th, 25th and 27th respectively.

This race had a crash even before the green flag dropped. Details were unclear seeing as how all attention was tuned towards the field bunched up behind the pace car, but the No. 32 car of *Aleks Gregory* ended up smashed into the wall of the Long Pond straightaway during the pace laps. Spotters and drivers alike were abuzz with radio traffic as to what happened; Gregory told his team that the car shifted into first gear when he tried to shift from second to third, though offered no details on how that turned the vehicle into the wall. Regardless of the cause, the damage was extensive, and the No. 32 car never turned a lap. The 33rd place result was Win-Tron Racing’s worst of the 2012 season.

*Underdog Performer of the Race: Ed Pompa* Pompa has finished 18th at Pocono before in an ARCA car, and has finished better than four laps down in a previous start. But he’s never done the two in the same event. The seventh career start proved a charm for Pompa, who kept out of trouble to score only the second top 20 result of his limited ARCA career.

• For only the second time since 1997, an ARCA event at Pocono started with only 33 cars on the grid. Runner-up finisher Chad Hackenbracht is one of those whose future in this 2012 campaign is uncertain owing to sponsorship troubles; Josh Williams is another, finishing in the top 10 Saturday and staying in the top 10 in points despite missing last weekend’s race at Elko. No matter the level of racing, no matter the cost, the economy is the story and a big one at that. Also of note, none of the drivers in the field are also running the Cup race Sunday…maybe because there are no more rookies?
• Frank Kimmel’s winless streak extended to 70 races after he rebounded from a late-race flat tire to finish sixth. The encouraging news for the nine-time champion is that until the tire was cut, the No. 44 was contending for a top-3 result.
• A few notes to be taken from Saturday’s race for Sunday: Though the No. 16 team reported some possible tire issues under the competition yellow, their top 5 result and silence across the radio for the most part suggested that Hoosier avoided any tire issues as a result of the repave job at Pocono. Combined with the rock hard Goodyears that are on the Cup cars, rubber isn’t likely to be a story at the tricky triangle. Also of note, for all the trouble that oil-dry and other debris reportedly caused on the track during Cup qualifying on Saturday morning, there were no incidents to be reported on track attributable to the surface, even after the Long Pond straight was covered in speedy dry following Gregory’s pre-race crash.
• While Brennan Poole’s victory Saturday allowed him to extend his points lead heading into Michigan, one stat worth noting. The last time a Venturini Motorsports driver won consecutive ARCA races was Steve Arpin at Salem and Texas back in 2010. At the time, Arpin was leading the points and primed for a title run. But, an ill-fated stint with JR Motorsports in the Nationwide Series and a stretch of five consecutive results outside the top 10 following those wins (including three DNFs) left Arpin an afterthought in the title fight…and still recovering career-wise. Poole’s got the hot hand, but history reminds all ARCA fans this season is still young.