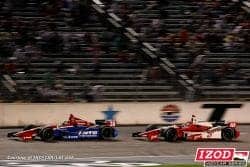 *In A Nutshell:* The pack racing that characterized races at tracks like Texas was the result of cars with so much downforce that all drivers had to do was mat it and drive. It was eliminated this time around by giving the new car set up options that required drivers to manage tires and adjustments throughout the stint and made the car very difficult to handle at times. It put the race back into the hands of the drivers who had to use all their skills to keep control. Cars came on strong and cars faded meaning a lot of juggling of position through the field, and overall, it ended up being an anything can happen kind of night. Fitting then perhaps that Justin Wilson, a driver not known for being an oval racer, took his Dale Coyne Racing entry to victory lane. Graham Rahal finished second followed by Ryan Briscoe, James Hinchcliffe and Simon Pagenaud rounding out the top five.

It looked like Graham Rahal would hold off Justin Wilson but he was forced to slow after making contact with the wall. Photo credit INDYCAR/LAT USA

*Key Moment:* Graham Rahal took the lead with 29 laps to go and it appeared he would hold a fast charging Justin Wilson off until he drifted a bit too high and tagged the wall with three to go. Rahal sustained some damage and had to slow, allowing Wilson to get by with two laps remaining. Rahal had more than a handful after that and did an amazing job just to hold on to second.

-The number one complaint among fans it seems is that it’s always Penske and Ganassi winning all the races. Well, there you go. A little something different. It wasn’t even Andretti or KV either—it was Dale Coyne Racing. The team only has one other IndyCar victory, with Wilson at Watkins Glen in 2009. Score one for a little guy.

-So what happened to all the big guns at Texas? All manner of bad things. Let’s start with Dario Franchitti. His car turned evil about 20 laps in and he just never got a handle on it. He ended the day in 14th, three laps off the pace.

-Scott Dixon led early and often, pacing the field for 133 of the first 170 laps. To be fair, there was great racing behind the lead but it was a bit of a snoozer at the front as Dixon just yarded the field. It looked like it would be the same old same old. Then suddenly the handling on Dixon’s car turned visibly foul and just a handful of laps later he took a very uncharacteristic trip into the wall. It was his first DNF by accident since Toronto in 2010.

-Will Power was the guy that finally passed Dixon and with teammates Ryan Briscoe and Helio Castroneves right behind, it looked like Roger Penske would pick up where Chip Ganassi left off. Power was racing side by side with Briscoe when Tony Kanaan tried to make a move to the inside. Power moved down the track in front of Kanaan, chopping him off and making contact with Kanaan’s front wing. Series officials decided the move violated their blocking policy and hit Power with a drivethrough penalty. Power finished the day in eighth, a lap off the pace.

-Blocking is perhaps one of the most controversial penalties in IndyCar. Often it’s a debate of was he or wasn’t he and how much should a driver be allowed to defend a position. This is not one of those cases. The lines on the race track clearly show Power moving down a full lane. It’s also a big safety issue because he didn’t just block Kanaan, he hit him. The could have gotten very ugly very fast.

-If Graham Rahal had won would people still be annoyed that a Ganassi car won?

-Simona de Silvestro and Rubens Barrichello never even got to start the race. Both had problems on the pace laps and were on pit road as the green flag flew. Neither driver made it back out on track.

-It was cool to see Bobby Rahal (Graham’s Dad) watching the race intently in the pits long after his own car was out.

-So Barrichello never even took the green. E.J. Viso’s car had a mechanical issue came to a stop on the race track. Tony Kanaan’s team had issues with the hydraulic jack on the first pit stop and had to use a manual one. In the process of using the manual jack, they damaged the nosepiece of the car and had to replace it. Still Kanaan fough his way back to challenge for the lead in the late going until the contact with Power broke his front wing and sent him to the pits for a replacement. Fresh out of wings, the team had to borrow one from Barrichello. Kanaan salvaged an 11th place finish. It was not KV Racing Technology’s best day.

-Ricky Bobby, you are not on fire. And neither are you, Marco Andretti. Andretti’s car briefly caught fire during a pit stop but the fire went out on its own as he exited the pit lane. Unfortunately Marco didn’t realize this and returned to pit road, shut it off and got out of the car before the team could assure him it was out. It took six laps to get him strapped back in and restarted.

*Notable Driver: Graham Rahal* came oh so very close to his second career win but saw it slip away after making contact with the wall with three laps remaining. Still, Rahal ran a great race all night and was really doing all the right things at the end. He was trying to save his tires as much as possible by moving his line up the race track and was trying to stay smooth and maintain the gap on Justin Wilson. When Scott Dixon crashed out, it really left Chip Ganassi with just one bullet in his gun but it sure was a good one.

*How Did Our Picks Fare?*
So much for your so-called experts. We had terrible beginner’s luck with this new feature. Toni Montgomery picked Dario Franchitti and actually did the best for the week after Franchitti struggled home in 14th. Matt Stallknecht picked Marco Andretti who finished not on fire, but securely strapped into his car in 17th. Danny Peters went with Scott Dixon who brought home an 18th place result after his crash.

Bummed for the team… Got a little loose and didn’t handle that one well. So so happy for (at)justin(underscore)wilson top drive boy top drive! _Scott Dixon via Twitter_

“It’s disappointing. The car was going to get better and better, especially in clean air. I had really good pace but the No. 5 car of Viso was all over the road in front of me. I had no idea what he was going to do for five laps in a row. I’d go low and then he’d chop me, and I’d take off toward the fence. Then I went on the high side that lap and coming off the corner he moved right up, I got a face full of dirty air and the thing snapped around.” _Charlie Kimball_

“We have one update finally and then something like this happens, which is annoying. But that’s kind of how the whole season has been going with our program. The guys are working their butts off and we’re trying to make things happen, but we just don’t have the pieces all put together right now.” _Simona de Silvestro_

“We just got loose. We had been getting loose at the end of stints. For the last ten laps of that last stint I was just really fighting to hold on. That time there I kind of got into the middle of a few people we were trying to lap and I was trying to get back up to (Will) Power there. I turned in and the rear just started to slide and I kind of dipped down onto the apron and shot around again.” _Scott Dixon_

“I just can’t believe we managed to pull this off. The car was fantastic. And on the long runs, it just got better and better. I saw people sliding around and knew I just had to hit my marks. I saw him (Rahal) sliding more and more every lap, and I didn’t think there was no chance, but when I saw him hit the wall, I thought “OK, now it’s time to go.” It was four-wheel drifting all the way into Turn 3 and all the way out of Turn 4. You were having to hang on out there.” _Justin Wilson_

“I just made a mistake, you know, I mean the car was pushing through the center of 3 and 4 pretty well the last stint, and it would kind of grip up for me late in the corner and I kind of stayed with it because they told me Justin was coming. So I was trying to pick up the pace a little bit, and honestly it just never gripped up, and I didn’t give myself enough of a margin for error.” _Graham Rahal_

“That was a long, long night for the Energizer team. My car was really bad to start with after thinking the car was really good last night. From about lap 15 on I crashed about three times and the guys brought me in to disconnect the rear bar. We lost some laps from that and them struggled without grip all night. We just fought as hard as we could for every single point after that.” _Dario Franchitti_

“I also want to thank my crew guys, we had a problem on the first pit stop and they managed to get it sorted and send me back out. Will Power then did the biggest block on me ever. We have been talking about safety and that wasn’t cool. I did go and talk to him after the race and we talked it out.” _Tony Kanaan_

“I had (Ryan) Briscoe on the outside and Tony (Kanaan) took me by surprise. I feel bad for him. I ruined his day because he had to come in and change the front wing, and we ruined our own day by getting the penalty. I do have to say, that’s the best racing I’ve ever had on an oval. You had to lift, you had to look after your tires, you had to really drive the thing, it was moving around. And that’s the sort of racing we need at places like this.” _Will Power_

*What’s Next:* The second of three consecutive oval races is on tap next week at the Milwaukee Mile with the Milwaukee IndyFest weekend. They might still be going in circles, but Milwaukee is a very different track from Texas. This is a Saturday afternoon event on June 16th with television coverage on ABC at 1:00 p.m. ET. Radio coverage can be heard on SiriusXM channel 94. The IZOD IndyCar Series will wrap up it’s June oval series in Iowa the following Saturday night.