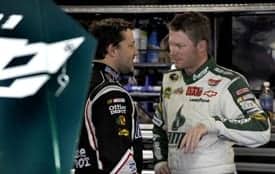 _Did you see all of the race action this weekend? Or, like lots of busy fans, did you miss a late-night adventure, a Friday controversy, or a juicy piece of news? If you did, you’ve come to the right place! Each week, The Frontstretch will break down the racing, series by series, to bring you the biggest stories that you need to watch during the week ahead. Let our experts help you get up to speed for the coming week no matter what series you might have missed, all in this week’s edition of Pace Laps!_

*NASCAR Sprint Cup Series: Is Earnhardt, Jr. On the Brink?* As anyone not spending a lot of time under a rock will take any opportunity to remind NASCAR Nation, next week marks four years since Dale Earnhardt, Jr. Last visited victory lane in a NASCAR Sprint Cup race. The drought has brought into question everything from Earnhardt’s relevance to his drive to his talent. Meanwhile, his Hendrick Motorsports teammates have won a total of 33 times since that day, along with three championships in 2008-2010. Through 14 races in 2012, Earnhardt is still winless. So why does it look as though the winds of change are blowing within the No. 88 team?

Tony Stewart didn’t win before the Chase in 2011 and went on a tear all the way to the championship. Is Dale Earnhardt, Jr. preparing to do the same thing in 2012?

Earnhardt may not have a win, but 2012 is a marked improvement for his team so far. Earnhardt is the only Cup driver to have completed every lap of every race this year. His eleven top-10 finishes are more than any other driver has been able to bring home, and that remarkable consistency has Earnhardt sitting second in points, just ten markers from the lead. But most telling may be Earnhardt’s last two races. He’s had strong starts in recent years, but those usually went off track and then derailed completely as the summer heat rolled in. Last year, Earnhardt led just one lap at Dover and failed to lead a circuit at Pocono. This year, instead of making laps and settling for that 6th, Earnhardt led a career-high 36 laps, and took a major gamble that, while it left him with an eighth-place finish, shows that Earnhardt and Co. are in it to win it. This simply does not look like the same team that limped through last summer. As any team in a slump will tell you, consistency has to come first, then wins. Consistency: achieved. There’s only one thing left to do. Look for it to happen soon.

*Izod IndyCar Series: Can Lotus Last?* The up and down saga of Simona de Silvestro and HVM Racing, the lone representatives of engine manufacturer Lotus, continued at Texas Motor Speedway on Saturday night. To review, de Silvestro was black-flagged out of the Indy 500 after only a few laps because her car was unable to maintain a safe minimum speed. She’d been off the pace from the start at Indy. In Detroit, her Lotus made the entire distance of 60 laps, although the HVM entry was the 13th and final car on the lead lap. Still, compared to Indy, it was a small victory and there were no serious mechanical gremlins to bring their troubles. Unfortunately, they were waiting for the team in Texas instead. This time, the car had issues on the pace laps and never officially took the green flag. De Silvestro was credited with a DNS (Did Not Start).

“We have one update finally and then something like this happens, which is annoying. But that’s kind of how the whole season has been going with our program. The guys are working their butts off and we’re trying to make things happen, but we just don’t have the pieces all put together right now,” said de Silvestro after Saturday’s woeful performance.

A small note of curiosity, would a manufacturer still get points if its car never even took the green flag in the race? The answer is apparently yes. Lotus still received four third place points toward the manufacturer title

The hope would be with just one car to prepare engines for, it would give engineers for the struggling manufacturer time to sort out the problems and get caught up. But can Lotus dig out of the hole it’s started out in before it’s too late? _–Toni Montgomery_

*NASCAR Camping World Truck Series: Satuer Finally Turning it Around* Johnny Sauter’s struggles this year have been well-documented, especially since he was tabbed as a pre-season favorite for the championship. But all of that changed Friday night when the ThorSport driver took his No. 13 Toyota to victory lane at Texas Motor Speedway. The big question now is whether Sauter can carry momentum from the win through nearly three weeks off into a Thursday night showdown at Kentucky Speedway on June 28th.

Johnny Sauter finally shed some bad luck to win at Texas, but now he’s got nearly a month before he can capitalize on the momentum. Photo courtesy of Rick Lunkenheimer.

Consider for a second the season they’ve had. With just one top-5 finish before getting to Texas, the results don’t quite reflect the performance. If it hadn’t been for bad luck that has followed Sauter straight from Daytona, he could easily have had six top-10 finishes. From getting wrecked late in the going at the season opener to every parts failure imaginable, Sauter has seen solid top-5 runs go away in an instant. So it’s not as if he hasn’t had fast trucks, but rather multiple problems falling on his team all at once. Now that they’ve gotten that victory, the No. 13 team can shake off the first six races and head to Kentucky with a positive attitude that will certainly prove beneficial in the long run. Despite the extended break, expect the No. 13 team to pick up right where they left off. And while they’re a longshot at best in the championship battle, don’t rule out a return of the Johnny Sauter that narrowly missed the championship last season. _–Beth Lunkenheimer_

*ARCA: Financial Woes Evident in Low Car Counts * For only the second time since 1997, an ARCA race at Pocono started with only 33 cars on the grid (and that was before Aleks Gregory wrecked his No. 32 machine on the pace laps). Take a look at the list, and there’s reason to be concerned. Four of those cars were pure start-and-parks. Five more came from just one owner. The second-place driver, perhaps the only entry in the field that had a prayer of stopping Brennan Poole Saturday, is unsure whether his CGH Motorsports team will be able to continue past Michigan this Friday. All of this is coming after a weekend at the Elko Speedway that drew only 28 cars, the worst car count the series has seen since May 26, 2000, at Kil-Kare.

With Richard Childress Racing having departed for the Truck Series after winning the series title a year ago and Roush Fenway Racing’s involvement gone sans their satellite involvement with the Roulo Brothers, the ARCA ranks are starting to show up a bit thin heading into the summer stretch of races. Though the series still maintains viability as a development ring due to its diverse schedule and comparability to Cup cars, it will be a story worth watching as to whether this downward trend in car counts continues. Sure, there’s still very few places for development drivers to go at this point in the upper echelons of the sport…but as Pocono demonstrated, there’s less money for drivers to come out and race, period. _-Bryan Davis Keith_

*Grand-Am:* After the sixth race of the season, the Daytona Prototype points lead is up for grabs, with only nine points separating six teams. While the No. 01 team of Scott Pruett and Memo Rojas sits in the lead with 170 points, they had better not get too comfortable, because the battle for second place rests between two teams–the No. 5 of David Donohue, and the No. 8 team of Ryan Dalziel and Enzo Potolicchio. Both of these teams are knocking on the door merely two markers out of the lead. Meanwhile Mid-Ohio winner, Richard Westbrook, who also won at Daytona to open the season, sits three points back as the lone driver in third. Just one point behind the driver of the No. 90 sits Darren Law, and the No. 2 team of Alex Popow and Lucas Luhr are holding onto the fifth spot in points with Oswaldo Negri, Jr. just one marker behind. With 35 points going to the race winner at each event, it’s anyone’s season to win.

The close points battle even stretches over on the GT side of things, where the top six teams are only separated by 33 points. With a battle this close approaching the halfway point in the season, where three of the remaining races fall over the next month and a half, including a six-hour endurance race at Watkins Glen, it should be interesting to see what risks the drivers will take to get the points lead. Is there a chance we’ll see more aggression if a single team asserts itself as the one to beat? Either way, the next seven races should be one of the most memorable Grand-Am seasons in a while as everyone fights for the championship trophy come Lime Rock Park in late September. _-Rick Lunkenheimer_

*Short Tracks: Is Kyle Larson the Next NASCAR Star?* The NASCAR Drive for Diversity program’s 2012 lineup was announced during the annual State of the Sport address press conference in January during the Sprint Media Tour. The members of the team were all members of the previous year’s class–except for one. That new addition to the class was Kyle Larson. Larson is an open-wheel driver who had never sat behind the wheel of a full-fendered stock car before February of this year. While that might seem like a stretch for some, it has proven to be a very wise decision by the people who run the program.

Larson debuted in a stock car at New Smyrna Speedway in the Pete Orr Memorial. After starting sixth he went on to win the prestigious event to kick off the season. He followed that by winning the first Super Late Model Feature event at the World Series of Asphalt Stock Car Racing at New Smyrna as well. Larson has since been racing for Rev Racing in the K&N East series. He ran in five races before this weekend, securing the pole for last weekend’s race at Bowman-Gray Stadium before coming home in fifth position.

But really, it was only a matter of time for Larson, and Saturday night was the right time. Larson qualified fourth and spent the entire race battling among the top five runners. After a restart that saw Larson get snookered by Cale Conley, the young driver began to refine his restarts to maintain his position. After a couple more green flags, the moment of truth came with five laps to go on the final restart of the event. Larson got the jump on Conley and held him off for the final five laps to score his first ever NASCAR victory.

The win also locks Larson into the UNOH Battle At The Beach, which will take place at Daytona during Speedweeks next season. For those who haven’t heard the name Kyle Larson yet, you will. The next big star in NASCAR could very easily have cut his teeth on the dirt track bull rings across the country driving midgets. He bears watching this summer. _-Mike Neff_