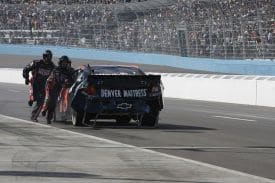 Before I write on anything else, I need to point out that my prediction last month about the L.A. Kings winning the Stanley Cup came true! I just had a feeling that with the way they were playing they would go all the way. My predictions don’t always come true so I need to let everyone know when they do.

Things have been starting to look better for the Furniture Row Racing team and I. There are several factors contributing to the turnaround and one of them is that RCR, who we have a technical alliance with, is also performing better of late. We have the ability to look at what they’re doing and do the same things that they’re doing. It’s a good relationship from that standpoint. Harvick is the flagship of the organization so we need to continue to look at what they’re doing to get better. The rest of us are getting better, we’re just not necessarily making the jumps that the No. 29 is making. I felt like Darlington and Charlotte were good weeks. We didn’t get the results that we wanted but we had more speed than we had in the weeks prior to that.

Dover was definitely a setback, even before the wreck, I didn’t have the speed or the comfort level in the car that I was looking for. So we made a lot of changes for the race and were interested to see what impact they would have. But you just can’t get a read on the car from nine laps in traffic and you really can’t get good feedback on the car when you come back out damaged, other than maybe a few handling characteristics related to air pressure.

Wrecked race cars are never fun, regardless of what perspective driver and others have on the wreck itself.

Speaking of the Dover wreck, I certainly have a different perspective on it since I first gave the interview on TV. The part I didn’t know when I was interviewed is that Tony and the No. 83 got together. Landon Cassill was in a blind spot for me too, contrary to what TV made it sound like. I heard what they said, I could not see the No. 83. With the way the track is banked and where I was on it, I did not see the No. 83 get sideways. The first thing I saw was Tony checking up. The reason I went to the bottom is because I had two options, I was either going to hit Tony really hard from behind or go to the bottom and hope to squeeze through it. That was my intention, I wasn’t trying to pass him, I just couldn’t stop. As it turns out, we didn’t make it through. In hindsight, yes I got into the back of Tony but that wreck was going to happen no matter what. When I gave the initial interview, I hadn’t yet seen the replay. Regardless, it still sucked to wreck on lap 9 of a 400-lap race.

We got to have some extra testing time at Pocono and because of the repave, we can take away information from that testing session to apply to other tracks. For example, we can look at the kind of force that is put on the tires in each of the corners. So with that being said, we can take data from turn one and apply it to a place like Kansas or Charlotte. We can take data from turn three and apply it to Indy. There is stuff that is going to be relevant and with the smoothness, it’s probably going to be more relevant than it’s ever been.

As far as the Pocono 400 itself, I thought we had a strong race, but did not get the results we were hoping for. I feel like we were better than 16th, but the handling fell off at the end. Still, it was a step in the right direction and got us back on track after the Dover disaster.

You may have heard a lot of people half joking about all the extra time we had at Pocono and trying to figure out what we would do with it. To tell you the truth, we didn’t have much time until the actual race weekend started. We got on the track immediately on Wednesday afternoon and practiced until late afternoon. It was the same on Thursday, we practiced all day. So as soon as we’re done, we come back and ate dinner and it’s like a normal day. The only day that we had a lot of time to kill was Saturday. Some stuck around and checked out the ARCA race while other guys got out and played golf or just got away from the race track. Megan actually came up for the weekend and I hadn’t seen her in almost two weeks so I was really happy to see her.

The summer months have now started but I don’t really have any special plans at the moment. We’ll see how that changes as the season progresses. I’m looking forward to racing every week and making this program better so we can get back to where we were last year and then improve from that point on.

Thanks again for all of your support! The team and I appreciate it! I’m looking forward to a summer stretch that will make our fans proud!

*Hey Frontstretch Readers – Now is your time to ask Regan a question. Just e-mail Tony Lumbis and [email protected] He’ll pick a few of your questions and submit them to Regan for him to answer in his next diary.*

Tony Lumbis has headed the Marketing Department for Frontstretch since 2008. Responsible for managing our advertising portfolio, he deals with our clients directly, closing deals while helping promote the site’s continued growth both inside and outside the racing community through social media and traditional outlets. Tony is based outside Philadelphia.
Previous IndyCar Preview: Milwaukee IndyFest
Next For Development Drivers, Winning at MIS not the Route to a Title 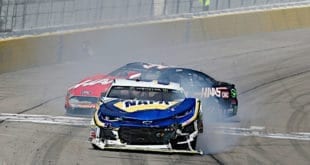 Driver Safety: One of NASCAR’s Top Priorities In 2020

Editor’s Note: This article on NASCAR safety is posted in collaboration with an outside sponsorship …

Why Is Motorsports So Popular?

Editor’s Note: This article is posted in collaboration with Webcontentzone, an outside sponsorship client. The …