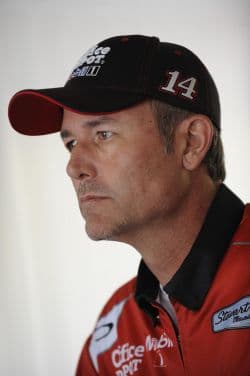 _Love them or hate them, road courses have been on the Cup series schedule since 1954. Unless you call the original beach course a road course, in which case there has been one on the schedule since the very first season in 1949. Not only does racing on a winding track require a different skill set, but it also takes a completely different car setup than running on ovals. Steve Addington talks about some of the nuances of preparing a 3,400 pound stock car to turn both right and left and the work that has gone into maximizing fuel economy._

Steve Addington will be taking Tony Stewart’s No. 14 to Sonoma this week. What challenges will the team face to balance their car on the road course?

Mike Neff: *The series is heading to the road course at Sonoma. It is completely different from racing ovals. We probably talk more about transmissions at road courses than anywhere else. Is there a limit on the number of gears you are allowed to run on a road course or is it up to the drivers preference?*

Steve Addington: NASCAR gives us specs and ratios between what first, second and third gears we can run and that is our option. We just try and gear the car for what we want and what the driver wants on the race track. It isn’t a big window but it is a good enough window. They’re very smart about where they limit us on gear ratios. It has worked out very well and we’ve been fortunate enough to have stuff that has been pretty good at that place.

Mike Neff: *On the clutch side of things, at race speed you don’t really use the clutch much when you’re changing gears. Do you have to beef the clutch up in case they do have to use it to change gears?*

Steve Addington:The biggest part that beats it up is the gear ratio that you want to run on the race track. Getting out of your pit stall, it is such a high gear ratio in first gear, that you struggle keeping it revved up enough to leave and that is where they slip it the most is leaving the pit stall.

Steve Addington: You have different guys who do it different ways. I’ve been very fortunate. Kyle was good on transmissions with his shifting points and Kurt was, too. Tony has always been smooth. I worked with him at Gibbs when Zippy was doing his deal with the No. 20 car. All of his stuff always looked good when I got the reports back from that. I’m looking forward to getting to Sonoma with Tony in the car.

Mike Neff: *From a technique perspective, you have guys who are heel-toe guys and some who are two foot guys. When you’re setting up the driver compartment and the pedals, do you have to set it up differently depending on their technique?*

Steve Addington: Some guys like the pedals close together and some like them spread apart. With Kurt we had to move the brake pedal around a bit because of how he liked to do it. They’ve already got it set here at Stewart-Haas Racing for Tony, so that is something I don’t have to deal with because they’ve run good at the road courses. He knows what he wants and they’ve got a pattern and a template of what he needs in the car as far as pedals. Every driver does it different, so you might have to move them a quarter of an inch one way or the other.

Mike Neff: *With the new EFI system, this is the first time we’re going to a road course with this system. Is there going to have to be a lot of changes to the mapping because of the amount you are on and off of the gas compared to ovals?*

Steve Addington: That is something that we’re anticipating. We went and tested after Darlington to do some mapping and worked with the Hendrick Motor Department on the mapping. They’ve been awesome with the mapping of the EFI package so they went with us to try and learn what they needed to do with the mapping to try and learn what they needed to do to try and maximize the fuel ratios and how to get the best fuel mileage that they possibly can for a road course race. It is all new to us and we aren’t sure exactly what to expect but the test helped us try and figure that out.

Mike Neff: *On the front end of the car, with your caster and camber settings, since you’re turning right and left, do you have to set the car up to be neutral or, since the course is predominantly right hand turns, do you build a little bias toward right hand turns?*

Steve Addington: With the springs in the rear end we are usually biased to making right hand turns but, with it being a road course, you keep your caster splits the same so that the front end feels the same turning both ways on the steering wheel. We don’t have any caster split for left or right at a road course. We keep it even vs. at an oval.

Mike Neff: *With your steering boxes, is the speed of the box up to the driver or do you try and max it out?*

Steve Addington: We always want quicker steering at a road course. We keep asking for more and more speed in the steering boxes, but the manufacturers have done a good job of giving us what we want. Every driver that I’ve had has wanted as quick of steering as we could get so it has been very simple for me.

_Road course racing is always a different animal and throws a curve ball at the competitors twice a year. The addition of the EFI system this season will add a new wrinkle which could mean that the team who figures it out the best will have a big advantage over the rest of the competition. In the end, it is all about keeping the car on the asphalt and making the fuel last as long as possible. We’ll see when the checkered flag flies on Sunday which team figured it out the best._

Previous Couch Potato Tuesday: TNT Focuses Too Much on Earnhardt Jr.
Next Who’s Hot/Who’s Not in NASCAR: Michigan/Sonoma Edition