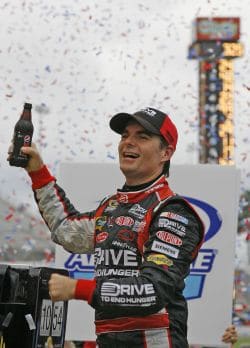 For the first time in 2012, the NASCAR Sprint Cup and Nationwide series will make the necessary right turns that constitute racing at the sport’s road courses this weekend at Sonoma and Road America, respectively.

Although it’s not as prevalent as it once was, there is often talk at such races of drivers called “road course ringers.” These racers are often hired for their prowess on specific tracks, making them sought-after commodities for teams that desperately need good runs at the road courses, especially if a team’s usual driver is unspectacular at road racing and isn’t in the midst of a championship battle, or if the team is teetering near the edge of the coveted top 35 in car owner points.

In recent years, Boris Said and Ron Fellows come to mind as definite road course aces, both having grabbed victories in the Nationwide Series. Still more include Brian Simo, Chris Cook, Scott Pruett, Patrick Carpentier and many more. Said and Simo are entered in this weekend’s Cup race at Sonoma, while Fellows will pilot a JR Motorsports entry in the Road America Nationwide event.

Given the emergence of these ringers, some drivers are overshadowed despite having good runs most of the time on the road courses. Others, while full-time competitors, are almost treated as ringers in their own right, as they are rarely part of the ‘potential winner’ conversation until we travel to these tricky tracks. Finally, of course, there are a handful of drivers who can win on any track, oval or otherwise.

Here’s a hypothetical and totally unrealistic situation that I’m creating for the sake of this column (c’mon, work with me here…): let’s say every full-time driver in NASCAR semi-retires tomorrow, only running a handful of races each season until they decide to retire completely. Now let’s say you’re part of a fledgling team that needs one of these veterans to help kick-start its road course problem. You want a driver who can win to attract sponsorship and gain some points to stay locked into the races.

So…who’s the go-to guy or gal? Read on to find out.

Absolutely, Jeff Gordon should top your list, no question. Gordon is poised to go down as one of the top road course racers in NASCAR ever, with results even the more adequate of right-turners would drool over. In one stretch from 1997 to 1999, Gordon swept six road course races in a row, including one at Sonoma where he was battling a bad case of the flu. Altogether, in 19 starts at Sonoma, the Hendrick driver has scored five wins, 12 top 5s, 15 top-10 finishes and five poles. Average finish? 8.7. That goes along with two poles, four wins, six top 5s and nine top-10 finishes in 19 starts at Watkins Glen.

It’s hard to argue with those kinds of numbers. It is also, however, hard to argue against sheer bad luck, which has befallen Gordon in 2012. He’ll probably shake it off eventually, but otherwise, he’s always one of the surest bets to find victory lane at the road courses. Nine wins combined can’t be wrong.

Initially, Ambrose was rarely mentioned as anything more than a good road racer who had the occasional respectable finish at another track. These days, as part of Richard Petty Motorsports’ resurgence, he’s been part of the conversation quite a bit more. But that doesn’t mean we can discount his road course achievements.

In four races at Watkins Glen, Ambrose has an average finish of 2.2. That’s one win, a second and two third-place finishes. His Sonoma results are less spectacular but still stunning–two top 5s and three top 10s in four races, the outlier being a disappointing 42nd in 2008 after a transmission failure.

So, subtract that 42nd-place finish and Ambrose has an average finish of 3.3 at both tracks. Wow. And that’s not even including his equally admirable Nationwide results.

If it weren’t for Jeff Gordon, Stewart would probably be considered the best road course racer of the past decade or two. In fewer starts than Gordon (13 at each track), he’s accumulated seven wins, 11 top 5s and 18 top-10 finishes.

In fact, there was a period in the 2000s where the Rushville Rocket was the man to beat at Watkins Glen, winning five races in eight years.

Of course, it was a dismal year at the road races for Stewart in 2011, when he posted a best finish of 27th at Watkins Glen. But if the owner / driver can return to his former glory in 2012, he’d be a great choice for any team looking for some help when it comes to turning left and right.

Montoya’s kind of become the Robby Gordon of NASCAR when it comes to road course racing, especially given that Gordon is no longer a full-time competitor (and therefore, sadly, will not get another mention in this article despite his road course prowess). Years ago, one might have played Montoya and Ambrose on the same level, but while the latter has excelled recently at other tracks, there’s really no other place at which Montoya is really considered a contender no matter what.

Oh well, at least we’ll always have the road courses, and Montoya’s always a good candidate to shine at them. In five races at Sonoma, he holds a 9.0 average finish, with a win, a top 5 and four top-10 finishes. Similarly, he’s scored one win, two top 5s and four top 10s in five starts at Watkins Glen.

I’m sure the Colombian wouldn’t like to be considered a ringer, but it’s kind of coming to pass. Until he starts running better on other tracks, he’s a sure bet for the road courses and pretty much nothing more. But hey — most of us can’t say we have two wins in NASCAR, let alone his other accolades, so there’s that.

In a long and illustrious career (that’s involved his share of semi-retiring), Martin definitely has a good thing going at the road courses. He somewhat strikes me as a Terry Labonte type (except Martin probably won’t ever fall off competitively as much) — perhaps going down to just a few races a year, but often helping out teams that need him at these tracks.

What’s surprising? He’s not even running at Sonoma this weekend, instead giving Brian Vickers a start in the Michael Waltrip Racing No. 55. With the kind of numbers he’s put up, you’d think he’d be a shoo-in for the ride there.

Any one of these drivers could win at any given road course. If they really were to become available to fill a seat when the series heads for the right-hand turns, teams would be beating down their doors for the opportunity to put them behind the wheel.