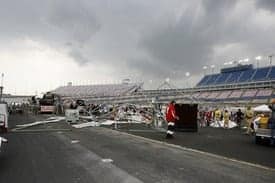 James Buescher laid waste to the Truck Series field Thursday night, leading 119 laps in a dominating effort. Well, Austin Dillon took that dominance and made it look tame, lapping Buescher twice and leading a Nationwide Series record 192 of 200 laps to score his first career Nationwide Series victory. There was not a single car in the entire field that was capable of passing the No. 3, which started on the pole, under green flag conditions. Kurt Busch, Kevin Harvick, Michael Annett and Justin Allgaier rounded out the top 5.

High winds that moved through the area a few hours before Friday’s race toppled tents and displays all around the Kentucky Speedway.

Despite scorching heat throughout the day in Kentucky, a wild storm front with 60 mph winds that blew through the area late afternoon (fans were evacuated from the grandstands briefly) cooled on-track conditions considerably for the green flag and the racing reflected it; only two cautions slowed Friday’s 300-miler after Thursday’s Truck race was mired by three yellows for spins in its first 25 laps. Long green flag runs strung the field out early and often on Friday, keeping attrition to a minimum. The most notable wear-and-tear issue seen over a fast 200 laps came in the Toyota camp, with both Joe Gibbs Racing entries parking early with engine issues and Kurt Busch losing a cylinder late.

Though RCR enjoyed a banner night with Dillon’s win in the No. 3, Elliott Sadler and the No. 2 team struggled to come home ninth with a car whose rear springs “felt like basketballs” according to the driver. Ricky Stenhouse Jr. finished eighth, his first top 10 in over a month, but lost considerable track position on a lap 84 pit stop when his crooked entry forced the team to back his car up before returning to the track and never recovered. As a result, Dillon leaves Kentucky the new points leader by two markers over teammate Sadler, with Stenhouse 23 points back.

*Author’s Note: Austin Dillon, the dominating winner of NASCAR’s Nationwide Series race at Kentucky Speedway has failed post-race inspection. Dillon’s No. 3 car was measured as too low in the rear end, a measurement announced at 11:15 PM long after fans had left the track. Because of the seriousness of the infraction, NASCAR has confirmed penalties and a likely points deduction will be forthcoming for the No. 3 team early this week. Dillon, whose win gave him the championship lead will almost assuredly hand that back to teammate Elliott Sadler at RCR after the consequences are announced.*

Decimated. Dominated. Obliterated. Owned. Whatever adjective one can come up with, it applies to *Austin Dillon’s* throttling of the Nationwide Series field on Friday night. Joe Gibbs Racing, Penske Racing, teammate Kevin Harvick, nobody ever challenged the defending Truck Series champion at any point of the race. Dillon made it look easy, and is the championship leader to show for it. Both Stenhouse and Sadler have to be considered on their heels right now, as with runs like these the No. 3 team is not going to be touched if they get going.

*NOTE: The No. 3 car failed post-race inspection for being too low in the rear-end. Penalties will be coming for the team and crew. Stay tuned, as the ecstasy of this night may well prove costly in the big picture for the soon-to-be-short-lived points leaders.*

It took 120 starts, but *Michael Annett* delivered the first top 5 finish of his Nationwide Series car at Kentucky in convincing fashion. Even in the early going with the track as hot as it would be all night, the No. 43 car progressed steadily from starting ninth and proved capable of racing with just about everyone in the top 5. Annett’s race was composed all evening long, and ended with the King himself greeting the driver in the garage area. Short of winning, there’s few cooler ways to end a race.

*Justin Allgaier* ended up the flag-bearer for Turner Motorsports on Friday after James Buescher’s victory in the Truck race, scoring his fifth top 10 in the last six races and more importantly equaled his season-best finish of fifth. Though it wasn’t quite as strong a run as the No. 31 enjoyed in its last top 5 at Dover, Allgaier still put on a great show for the team, keeping his car up front on old rubber and weathering furious restart challenges. The No. 31 team doesn’t seem to be knocking on victory lane’s door yet, but they’ve stepped their game up the past month or so and are starting to resemble some of the form that had Allgaier at the top of the Nationwide regular heap a few years back.

*Ryan Blaney* was penalized for a missing lugnut on the event’s first round of pit stops, falling from a position in the top 10 to 21st. Sadly, the No. 36 car would never fully recover from that loss of track position, but Blaney still ran a clean race all night and finished 15th, a performance that went a long way to redeem the promising driver after his ugly early-race wreck last month at Darlington.

*Sam Hornish Jr.* and *James Buescher* each delivered top 10 finishes for their Nos. 12 and 30 teams.

*Brian Scott’s* strong run of three straight top 10 finishes came to a screeching halt at Kentucky, as the No. 11 team fell victim late to engine woes, one of three Toyotas in the field to do so. Scott was seemingly a lock to extend that streak of solid results to four, having broken into the top 10 by lap 40 after starting 15th, a small takeaway to be had for a team that had been building momentum. Though in suffering a blown engine, Scott could be said to be mirroring teammate Kyle Busch. That’s got to be worth something, right?

*Timmy Hill’s* evening ended up 59 laps short of the finish courtesy of a failed rear end on his No. 41 Ford. The mechanical woes were harsh for the driver and team, who on lap 140 were running in the 18th position (would have been the No. 41’s best result since Charlotte) and, according to the driver, were ready to treat a top 20 as a win.

*Danny Efland* and the No. 4 car lost laps early when the sheet metal on the passenger-side door panel of his car began to peel away under green flag conditions, drawing the eye of NASCAR officials and necessitating early green flag pit stops. Problem is, the fix the team put together on pit road didn’t stick, and it wasn’t but a few laps later that the peeling metal began flapping like a bird’s wing, especially down the front straightaway. Efland ended up in the garage for an extended period of time for repairs; he finished 34th eventually with what the team designated ignition failure.

*Morgan Shepherd* was forced to retire from the event after completing only 48 circuits; radio communications circulated around a flooding problem under the hood before telling the team “we can’t run anymore.” Shepherd finished 35th, another disappointing result at the same track that nearly put his team out of business in 2007.

On a race night that was all but attrition free, *Mike Wallace* suffered more damage than any other driver in the field, pancaking the right side of his No. 01 machine on lap 142 hard enough to dislodge the crush panels and bring out a debris caution. Wallace was able to limp around for enough laps with a damaged car and a broken clutch to grab 31st place before being black flagged for failure to meet minimum speed. The finish was the worst for JD Motorsports’ flagship team since the second event of the season at Phoenix.

There’s also something to be said about the size of these two crowds so far…they’re not what we’re used to seeing at Kentucky. Maybe everyone’s waiting for tomorrow to show up, but this was as sparse a Nationwide crowd as has been seen in this track’s history.

*Underdog Performer of the Race; Reed Sorenson* It’s hard not to carry the name Shelby on a race car and not be successful, but for Sorenson a 13th place finish is to be commended on a number of levels. For a driver that already at age 26 is a journeyman and was making only his third start of the year, to score a top 15 result is impressive enough. But to do so for a part-time operation in Biagi-Denbeste Racing that has been on hiatus for years…and that hasn’t finished that well in a Nationwide Series race since Mark Green started the 2006 season with a top 10 at Daytona, well, there’s nothing left to be said. Honorable mention goes out to dirt racer *Josh Richards*, who took major strides forward in the No. 39 car by qualifying 18th and finishing 20th, a career-best.

Cup regulars scored 3 of the top 10 finishing positions, occupied 8 of the 43 starting positions in the field, and took home $157,038 in purse money.

• Two returns of note; Kenny Wallace finished 11th in only his third Nationwide Series start since Fontana; Jamie Mosley spun out early and coasted home 29th, 18 laps down, in his first Nationwide Series race since 2007.
• Brad Keselowski was another driver alongside Ryan Blaney that proved completely unable to recover from lost track position as a result of an early pit road penalty. Having said that, there’s reasons to be concerned about the level of passing that will be seen over 400 miles of Cup racing Saturday.
• The Kentucky Speedway crew may have been lambasted for being unprepared for traffic last year, but they were to be commended for their handling of the severe weather that blew through the track during Cup qualifying. Evacuation of the grandstands and the infield to spots under the bleachers or in the underground tunnel was done quickly and effectively, with track staff doing well to communicate with individuals in the thoroughfares. Safety personnel on pit road were also fast to respond to a large tent that threatened to go airborne, dismantling the structure before debris went flying. The crowd certainly wasn’t Cup-sized, but a job well-done nonetheless.
• The Nationwide Series next heads to Daytona. Anyone remember just how dominant the No. 3 car was the last time it ran the summer Nationwide Series race at Daytona? Austin Dillon makes it two in a row…you heard it hear first.