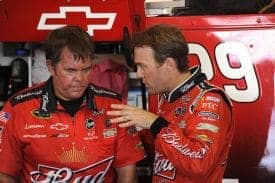 _The series is heading to Daytona where the car is the vast majority of the reason for the success. Richard Childress Racing has been a dominant team on plate tracks for many years so Tech Talk caught up with Shane Wilson to get his take on heading to the World Center of Speed for the second time this season, when handling is going to start being a factor again at plate tracks and how to keep these cars cool enough to make plate racing exciting again._

Mike Neff: *At Talladega Matt Kenseth was driving around with a fender that basically had a big scoop on the top of it, led the race and came home in third. Teams spend millions of dollars to make these cars as slick as possible getting through the air. Is the aero thing overrated with these tracks having so much grip after having been repaved or is it the whole package?*

Shane Wilson talks with us this week about keeping the No. 29 Chevy cool on a hot summer night.

Shane Wilson: Speaking as a crew chief, I’d say he didn’t win and he was probably the best car until the damage. We do work very hard on the bodies and everything so that when we get up front we have the car at its best so that we can race for the win. I’d say he didn’t win after leading the most laps or second most to Biffle. If you get tucked behind people back in the draft it will hide a lot of those things but the goal is to win the race and you have to be the front car to win the race. It does matter and now that we can’t tandem race it is going to be very hard to win a race when you don’t have a fast car.

When we were tandem racing you saw some people who were slower cars that got teamed up with faster cars and ran pretty good laps. A lot of times, if you’re slow it is because your body is off and if you’re pushing it doesn’t matter if your body is off. Now going into plate races it is more important to have the body right. We’ll still see some tandem stuff but it is only in the last few laps. The tandem is a deal where you want to get to the front or right at the end but other than that you have to take care of your engine all day so you have to pack race.

Mike Neff: *There were rule changes made for Talladega. Not sure how well those worked. What rule changes do you anticipate heading back to Daytona?*

Shane Wilson: What I would like, and I don’t know that they’ll do it, but the guys with the newer engines have the advantage with the cooling. Ford and Dodge are the manufacturers with the newer engines that are better at cooling. I’m not whining, it is just a fact they just cool better. We (Chevy) make good power but you need to have both. It is funny how speedway racing has evolved and now we’re trying to figure out how to make it cooler rather than taking drag off of the car. It is a little different for us and we have to adapt and try to make our car run a little cooler so we can stay in the draft longer and tuck up behind people longer.

That will equate to speed. That is what we have to work on as a group. I’d really like to see them open up the grills. We have a few speedway cars and we expect to crash one every now and then, that is just the way it is. However, we’re not expecting to throw away our motors away and all of our cylinder heads away after every race. That I think they need to change.

Mike Neff: *They put limits on the cooling systems which prevented people from even running in the pack. Do you think they need to limit the cooling or do they need to work on the package to make the cars capable of staying cooler?*

Shane Wilson: I don’t have the answer but I know that limiting the cooling is not the answer. Drivers running around watching their gauges isn’t it. For us we could not even race until the very end at Talladega to make sure our engine lasted. I’m not a big fan of it but, as I said, I don’t have the answer either. If they don’t want tandem racing I don’t know how they achieve it without going the cooling route. I would like to see it lifted though. We were very good at the tandem racing. I think it is the way they built the car and I don’t think they’re going to fix that totally. They still tandem raced at the end of Talladega, so they didn’t stop it for the race they just stopped it during the middle of the race. I thought the race was a lot more boring because you had so many fewer lead changes.

Mike Neff: *With the cooling and cars overheating just running in the pack not even pushing, do you feel like that forced your hand from a strategy perspective because you didn’t have a choice on how to race the event until the very end?*

Shane Wilson: It is very frustrating because we just rode around. Our sponsors pay us to race, we’re racers and we want to race all day. The good teams just ran where they were comfortable and didn’t race each other. I think that ruined one of the best races we have. I’m always excited to go to Talladega and Daytona and now it is just not as much fun. For me, if I was a fan in the stands, I’d like to see a different venue but, as I said, I don’t have the answer for what they need to do.

Mike Neff: *Going to Daytona in July, there are various opinions on this, but a lot of people say we used to run in the afternoon because you’ll get the race in eventually, knowing it always rains in Daytona in July. With it being a night race and knowing there will most likely be some kind of weather that impacts the event, do you go into the race planning on there being some kind of weather impact and do you have to consider trying to be in the lead at the halfway point in anticipation of that?*

Shane Wilson: For sure you have to constantly watch the weather and down there it is still a guessing game. That’s why I hope they do something for the cooling because I don’t know if we can race half of the race or 5/8 of the race at Daytona. I think we’ll be one of those guys who’ll be riding back there and if it does rain it will just be what it is. For us we have to try and have ourselves there at the end of the race and it is really hard, at Daytona on a day when there is rain around, to figure out when it is going to rain and when it isn’t going to rain.

Mike Neff: *Back to Talladega, there were some people who said that handling actually came into play for the first time in a few years. With that track starting to age, do you think handling may come back into play there?*

Shane Wilson: I know a few people complained a little about it. We had no issues but it is going to start showing up. It did right before they paved it. It will definitely start soon. Daytona will see it show up more quickly because it is narrower and you have to stay in your lane. When they say it is tight it isn’t like you’re in the bottom lane and pushing all of the way up to the wall. At Daytona you have sharper corners and a little narrower race track so everyone is a little closer together so if you push up a foot you’re pushing up into somebody. As it ages it will get worse and as it gets bumpier we don’t make as much downforce because the splitter will flutter and come up and down and we lose some of the force. Within a year at Daytona you’ll probably see a little handling again. At Talladega they’re talking about it but it will probably take a couple more races before it is an issue.

Mike Neff: *One last thing, what is the capacity limit on the cooling system?*

Shane Wilson: You’ve got me there, the radiator can only hold two gallons of fluid and the whole system is around three and a half with everything full. That is more of a factor in qualifying and then also with a little bit smaller capacity it heats up quicker but it also cools down quicker so, with that theory you can go a couple of different ways. That’s not really the big issue, if we could have some nose opening. We don’t race that small of a nose opening at mile and a half tracks where we’re actually going the same peak speed. They’re just a little tight on the nose opening and if they’d open that up I think we’d be ok. Being as the inlet is high on the bumper where we push, I think they just need to open that up so everyone has enough air so we’re not looking at the gauges while we’re trying to race.

_Kevin Harvick and Paul Menard finished in the top 10 at Daytona in February while Jeff Burton was in the top 10 at Talladega. The cooling rules could make the race this weekend very interesting if the temperature is very high. Cars were overheating at Talladega when the temperature was in the 70s, temps in the 90s may truly turn Daytona into a survival race. Keep an eye out for rule changes after the first practice._